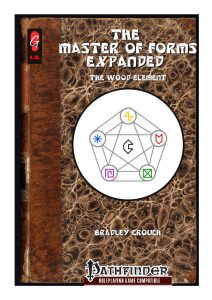 This expansion for the Master of Forms-class clocks in at 9 pages, 1 page front cover, 1 page SRD, leaving us with 7 pages of content, so let’s take a look!

I assume familiarity with the Master of Forms class in this review.

All right, so the wood stance allows the master of forms to grant a single growth point to a floral ally within 30 ft. What’s that? Well, the element comes with the sow the seeds ability, which nets the buried wildthorn, shieldroot and tilling broadleaf forms. Each of them creates a stationary floral ally that has a single action per round. These forms do not count towards the wood forms known for the purpose of prerequisites, but do count as wood forms for the purpose of entering and maintaining elemental stances.

Buried Wildthorn has a range of 30 ft., focus requirement of 0-3, and entails no focus change. The wildthorn is planted as a standard action, and 1/round attacks a target within 30 ft. of its position, with an attack bonus of class level + Charisma modifier. Damage is 1d8 piercing damage, with 7th level making the attack count as magical. The ally shares all attack and damage bonuses and penalties you have, and gains an enhancement bonus to attack and damage rolls equal to the highest bonus your weapons have. It has hardness equal to Charisma modifier, and thrice class level hit points. Melee attacks hit automatically, but ranged attacks have to hit a paltry AC.

Shieldroots follow a similar design paradigm, but act as buffers, providing temporary hit points to those nearby, while tilling broadleaves can use pollen to dazzle those that fail a save, or temporarily create difficult terrain. Here’s the thing: All of these have a second ability section: Growth. At 2, 4, 6, 8 and 10 growth points they increase their effects. The buried wildthorn, in sequence, first adds Charisma modifier to atk, can expend growth points to execute cone-bursts of needles, cause bleed damage, overcome metal-based DRs, or self-destruct in a shrapnel explosion (to which the master of forms is btw. immune)! Cool! The shieldroot adds AC boosts, can make you share temporary hit points granted to allies, enhance saves, grant minor DR, or detonate in a short-lived, but AoE-affecting temporary hit point burst that could well mean the difference between triumph and TPK.

These three can be improved with the “Enhanced *insert floral ally name* forms” – these reduce execution time for them to move action, focus change to +1, and provide an Escalation for the respective floral ally. Nice! With fecundity, a passive, whenever a creature dies or is destroyed, you may expend 1 focus point to grow one floral ally that doesn’t count towards your maximum. The short lifespan of these do prevent any abuse scenario I managed to come up with. The second passive, Bonsai, requires 6th level, and allows you to plant a floral ally in a small pot that you can carry around – it basically occupies your square. You can only have one such ally, but it does enhance its AC somewhat – and, well, it’s now mobile. Speaking of mobility: With the transplant form (an active one available at 6th level+) (swift action, range 60 ft., focus change +1), you can transplant a floral ally to an unoccupied square in range. Unique: This does allow for the use of an additional form, but any form with a +1 focus change instead has a focus change of 0. The third passive lets you the first time when you’d be reduced to 0 or below hp per day, expend 3 focus points as an immediate action, regaining 1d10 hit points per class level. Nice.

Fertilize, with a focus change of +1, allows you to grant a floral ally within 60 ft. 1 growth point, 2 at 11th level. There are three actives that require the respective “Enhanced” floral ally form: Razor Lash has a range of 30 ft. and a focus change of -1: It nets a nearby wildthorn +1 growth point and lets you make an attack that deals 1d8 + class level + Charisma modifier piercing damage as either a standard action or as an attack in a full attack. The Regrowth form requires the Enhanced shieldroot, and nets temporary hit points and a growth point – as an immediate action, which explicitly allows you to bypass the fixed limit on forms. Nice. The form building on the Enhanced broadleaf lets you create broadleaf forms, as though you had 1/3rd class level growth points (minimum 1, rounded down) and grant, bingo, a broadleaf a growth point.

Starting at 6th level, metabolic overdrive is unlocked: At focus change -2, it requires a move action to activate, and allows floral allies in range (60 ft.) execute two actions, but at the cost of 3 growth points per round. Virulent Decomposition, also at focus change -2, may be activated as a standard action, has a range of 60 ft., and infects a target with a fungus that deals constant acid and Constitution damage. Killing the target nets you growth points to floral allies within 60 ft. of the vanquished foe. At 8th level, masters of forms can choose the Rampant Growth form, which lets you bury instantly undeployed types of floral allies, or immediately max out growth points, at the cost of the floral ally dying after its next action. At -2 focus change, it can be escalated to -4 focus change, which lets you choose both effects AND the order in which they take place! Nice: Players with less experience get a full hint here how you can use this to combo! The -4 focus change form, Mulch, which requires 10th level, combos 1d6 acid damage per class level plus 1d6 fire damage per class level to a target within 60 ft., and if killed thus, you really boost the growth of your floral allies in range.

The pdf also features two new feats: Miracle Grower allows you, up to 5/day, grant a floral ally that would receive one growth point to get two instead. Vengeful Gardener lets you, when a floral ally is destroyed, perform the wood form associated with that ally (the one with “enhanced” before the name – they’re listed in the prerequisites) as an immediate action, without having to pay or gain the focus change of the form or having to meet the focus required. It also doesn’t, obviously, count towards the forms-per-round-limit. However, you may only do so once per day per form associated with your floral allies – once for shieldroot, once for tilling broadleaf, and once for buried wildthorn.

Editing and formatting are very good on a formal and rules-language level. Layout adheres to interjection Games’ elegant two-column B7w-standard, and the pdf uses some nice b/w-artworks. The pdf has no bookmarks, but needs none at this length.

Bradley Crouch’s wood-expansion for the master of forms is awesome. Full of combo-potential, the floral allies look weak at first, but with the right set-up and a capable master of forms, can make for the difference between life and death. With combo-potential and a very distinct flavor, this is a prime example of an excellent class-expansion pdf that is well worth its exceedingly low price. 5 stars + seal of approval.

You can get this great expansion for the master of forms class here on OBS!

Missed the Master of Forms? You can find the class here!

The shadow expansion for the class may be found here!

Want a compilation of Brad’s combo-classes? You can find that book here!

Enjoying my reviews? Please consider supporting my patreon. It’s keeping the lights on.