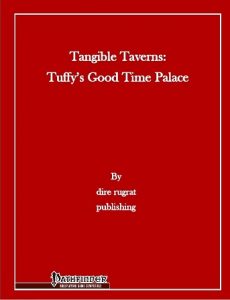 This installment of the Tangible Taverns-series clocks in at 22 pages, 1 page front cover, 1 page editorial/ToC, 1 page SRD, 1 page back cover, leaving us with 18 pages of content, so let’s take a look!

There are taverns you enter and *know* immediately that you just have gone to the wrong side of town: Tuffy’s is such a place. Paint peels from various surfaces, glass and food and other debris litter the floor, as scantily-clad women dance on some tables, while a female dwarf with cold blue eyes gazes directly at the PCs. Strangely, some people seem to come and go through a door behind the bar, while the various pickled foods you can purchase are anything but easily digestible. In fact, PCs eating here run a very real risk of contracting food poison, with all required rules provided by the pdf.

Following, to an extent, the formula of Raging Swan Press, the book also provides a whole page of rumors, but takes a more detailed approach befitting the tighter focus- a total of 12 such rumors are provided for your convenience and as ready to go read-aloud texts. Should the banter thus generated not suffice to draw your PCs into direct interaction with the locals, you won’t be out of luck – a total of 10 events further can be utilized to jumpstart social interactions and the like, with the table once again spanning a whole page and going into very detailed territory.

The tavern itself is full mapped with a functional, solid map, though the pdf does not provide a key-less version or one blown up to page-size to act as a handout. Additionally, the map does not sport a scale for reference.

Beyond the tavern itself, the patrons obviously are important – and generally, two different groups, both with their own agendas, are provided in addition to Tuffy herself and her none-too-smart piano-player. The first such group would fall in the criminal territory, while the second consists of mercenaries – these combat relevant NPCs come with full-blown statblocks, which makes use of the ACG-material while also using archetypes.

The non-combatants like the dancers may have no statblocks, but they do come with ample of information regarding their goals and the like. The pdf also features several mugshots for the NPCs featured herein. Additionally, the pdf’s appendix features several statblocks for rank and file members of the criminal organization as well as two statblock variants of characters introduced herein at +4 levels each – with the intention of potentially changing the power-structure of the organization in question. CR-wise, the NPCs range from CR 3 – 14, making the offering suitable for low- and mid level adventurers with strong stomachs.

Conclusion:
Editing and formatting are very good, I noticed no grievous glitches. Layout adheres to a printer-friendly, no-frills two-column b/w-standard. It’s minimalist and functional – no significant complaints here. The pdf comes fully bookmarked for your convenience and cartography is nice, particularly in such a low-cost little book. The b/w-artworks are flavorful and nice.

Kelly and Ken Pawlik’s excursion to Tuffy’s is a successful one – while the components used herein may not be mind-bogglingly innovative, they don’t have to be: The set-up and number of statblocks herein and the great local color and prose are certainly nice to read and the pdf can certainly offer more than one session of roleplaying – it may even become the favorite dive of particularly hardy PCs, with Tuffy and her folks being truly intriguing characters. That being said, I wouldn’t be ole’ endy if I had no complaints, right? Well, amid all the intrigue and the two groups in the book, the tavern itself could have used a bit refinement regarding the formatting of its look: The pdf begins with this well-written 4-paragraph-long introduction that sets the stage really well…and then goes straight into the rules to notice strange comings and goings. A more pronounced separation of flavor/quasi-read-aloud text and rules would have improved the reading flow here.

Secondly, and this may sound nitpicky: The tavern lacks a menu. While food is mentioned, no prices are provided. Nor any named breweries, special drinks available or the like. For a book on a tavern, that’s somewhat jarring, at least to me. Don’t be fooled, though – I am complaining at a surprisingly high level here, with the characters and amount of stats contained herein definitely making this a fair offering, though one focused perhaps a bit too much on the clientèle and less on the place itself.

In the end, Tuffy’s is a more than solid, nice buy – and in case you’re wondering: I’ve consciously refrained from going into the details regarding the groups and their members to avoid spoilers – so if you have any questions in that regard, don’t hesitate to contact me.

You can get this inexpensive, nice pdf here on OBS!

The system-neutral version can btw. be found here!