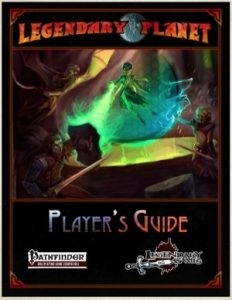 Okay, after the usual introduction to the matter at hand, we have to discuss one thing: The AP is set to officially begin at 2nd level, with the optional “The Assimilation Strain” prequel basically blindsiding the more mundane PCs. Hence, campaign trait selection is held off to the begin of the first “proper” adventure. Beyond that, there is a bit of a potential disjoint here: Namely, that this Player’s Guide provides an array of new alien races, which make perfect sense in the context of the AP, yes, but also contradict the optional Assimilation Strain lead-in. Basically, if you elect to employ the “fish out of water”-approach and run the prequel with terrestrial PCs, you’ll lock yourself out of basically all options in this book…until a PC dies/retires, that is. Which is a bit of a pity, since I prefer the approach via regular PCs stumbling, wide-eyed and bumbling, into the possibilities of Legendary Planet…but your mileage will obviously vary.

Anyhow, the first of the new races introduced herein would be the Auttaine, half-constructs that gain +2 to an ability score of their own choice, normal speed…and they have build points – 3 + initial Constitution modifier, to be precise. They can use these points to customize their own bodies – from internalized weapons to component pouches, the customized options are pretty cool.

Chlorvians are basically the half-plants here and gain +2 Con and Cha, -2 Str, low-light vision, +4 to Stealth in wooded environments, +1 natural armor, retries of Diplomacy-attempts only botched by 5 or less and treat Charisma for the purpose of the verdant bloodline as two higher, +1 level for purposes of the Plant domain. Characterized by the symbiotic bond with a seed, they also get +2 to saves versus mind-affecting effects, paralysis, sleep, poison, but thankfully not the huge array of plant immunities.

The Tretharri are 4-armed philosophers that gain +2 Str and Wis, -2 Cha, +2 to Swim and Climb checks and 4 arms – one is primary, all others are secondary. Still, this makes them brutal shredders.

The Zvarr, winged saurian humanoids, would be the final new race. Zvarr get +2 Dex and Int, -2 Wis, gain a climb speed of 30 ft, darkvision, +1 to Acrobatics and natural AC, a 1d3 primary bite attack that can be used as secondary in conjunction with weapons, +2 to Appraise as well as vestigial wings they can use via Fly to glide and prevents deadly falls. The races come with age, height and weight tables.

I was btw. positively surprised by the following section – from languages to focuses and skills, the pdf does offer some general, but very welcome guidelines to make the characters work well within the context of the Legendary Planet AP, discussing skills and the like – but the book actually goes one step beyond that, also featuring information on various intriguing classes from the 3pp-circuit – from godlings to luckbringers and machinesmiths, to, obviously, psionics, the Player’s Guide provides quite a few nice shootouts pertaining how the classes work within the context of the saga.

The pdf also offers 12 unique campaign traits that count as their own category. Unlike traditional traits, these do come with extensive and evocative background flavor – whether you are a surviving experiment of the dread Jagladine, an interplanar gladiator or a xenobiologist, the traits generally are intriguing and mechanically relevant – bursts of movement, for example, are intriguing and powerful. I found myself pretty excited about them and hope the saga will actually reference them in the plot to come. Cool and well-crafted section!

Editing and formatting are top-notch, I noticed no significant glitches. Layout adheres to Legendary Games’ beautiful 2-column full-color standard for the series and the pdf offers several beautiful full-color artworks for the new races, etc. The pdf comes fully bookmarked for your convenience, though they are a bit glitchy – they point towards e.g. sections of the intro and quite a few are called “_goback” instead of being properly named.

Will McCardell, Alexander Augunas and Neil Spicer have crafted a per se great player’s guide. The races occupy the upper echelons of power and feel sufficiently brutal for the purposes of this AP. Power-wise, these aliens basically are in the upper echelon beyond the capability of e.g. the aasimar. For the high-powered gameplay we can expect from this AP, that works, though, and generally, the races seem to be pretty much on par. That being said, there are no favored class options for the races, in case you expected those.

This Player’s Guide, as a whole, makes for a great offering for the demographic that wants to start Legendary Planet at 2nd level. Those of us, however, who wished to begin with the “fish out of water”-scenario via “The Assimilation Strain” are basically left hanging in the air. The enhanced power and campaign traits associated with the setting are useful and cool…but they ultimately don’t help bridging the power gap between the races and terrestrial standard races. Whether it’s “a simulation”, a time-lapse or the like, the pdf doesn’t really offer help reconciling the assumptions of this PG with the alternate, optional prequel. I expected to see some notes on upgrading regular characters to those herein or an alternate “unlocking”-system for the content herein…or something like that. As a whole, those of us who opted for this entry vector will get no help from this pdf, which is the one massive gripe I have against it. This does not make the Player’s Guide bad, mind you – but it does limit its appeal and immediate usefulness for those of us who elected to run with the prequel.

This may not wreck the otherwise concise and well-written player’s guide, but it does render the book less universally appealing than it otherwise would be. Hence, my final verdict will clock in at 4 stars.