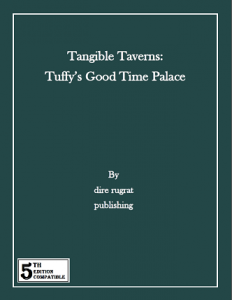 This installment of the Tangible Taverns-series clocks in at 22 pages, 1 page front cover, 1 page editorial/ToC, 1 page SRD, 1 page advertisement, 1 page back cover, leaving us with 17 pages of content, so let’s take a look!

The 5e-version of Tuffy’s Good Time Palace is, fluff-wise, pretty identical to the Pathfinder-version: I.e. Tuffy’s is still a seedy dump of a bar with an eccentric, female, dwarven barkeep and a somewhat less-than-bright brute at the piano. Scantily-clad women dance here and shady groups, two to be precise, scuttle through the shadows, as a surprising amount of patrons seems to vanish behind a door behind the bar…the set-up of a seedy bar, complete with the chance to contract mild food poisoning has been translated very well into the 5e-rules-frame, with the notable exception of one Wisdom (perception) check that retained the, for 5e rather high DC 15 from its Pathfinder sister file.

The supplement does come with extensive rumors and events to facilitate roleplaying within the context of Tuffy’s – each of the respective entries is rather detailed and can be considered a good and rather detailed hook. One of the main draws of the file, though, would be the depiction of the owner, her employees and the two shady groups of people frequenting the establishment.

Here, the change in systems is more pronounced and honestly, it is here that the pdf had its most significant challenge: The PFRPG-builds utilized several rather specific mechanics-combos and translating these in spirit to 5e would not be an easy task. Instead of restricting itself to the class features of the default classes featured in the PHB, the pdf instead opts to go the more interesting way, granting unique features to the respective NPCs.

Tuffy, for example, has several tricks that render her particularly lethal in the environments of her bar, with the big mastermind gaining a unique, charming presence as well as a damn cool BBEG-escape trick. As a whole, the builds provided in this pdf turned out to be pretty intriguing. The fact that the Dire Rugrat-team went one step beyond in these builds is something I really appreciate. Challenges of the NPCs range from 1/2 to 10.

The tavern does come with a serviceable map in b/w, but sand a print-out-sized version or one that is key-less/player-friendly.

Conclusion:
Editing and formatting are very good, I noticed no grievous glitches. Layout adheres to a printer-friendly, no-frills two-column b/w-standard. It’s minimalist and functional – no significant complaints here. The pdf comes fully bookmarked for your convenience and cartography is nice, particularly in such a low-cost little book. The b/w-artworks are flavorful and nice.

Kelly and Ken Pawlik’s 5e-version of Tuffy’s, surprisingly, actually turned out to be more interesting to me than its PFRPG-iteration. The characters are pretty cool, though we don’t get scaled statblocks for characters in this version. Beyond its colorful characters and nice flavor-text, the pdf des share the lack of a menu or prices with the PFRPG-version and, like it, there is no clear distinction between the introductory prose and the rules-relevant section – generally, the tavern could have used a bit more fleshing out, with the majority of the appeal here stemming from the cool potential of the NPCs and their local color.

You can get this nice environment here on OBS!

You can find the system-neutral version here!