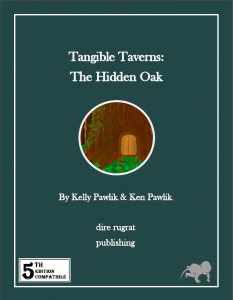 This 5e-iteration of the installment of the Tangible Taverns-series clocks in at 20 pages, 1 page front cover, 1 page editorial/ToC, 1 page foreword, 1/2 page advertisement, 1 page of SRD, 1 page back cover, leaving us with 14 1/2 pages of content, so let’s take a look!

This pdf was moved up in my review queue as a prioritized review at the request of my patreons.

The PCs are traveling along a path through the forest, when they suddenly encounter a weather-beaten sign next to a small, but well-used path – the sign points towards “The Hidden oak”, and after a quarter mile through sunlit, light forest, the PCs arrive at a clearing, where colorful mushrooms and gorgeous flowers provide a carpet that leads straight up to a ginormous tree, which sports double doors, secured to the tree with bronze. Upon entering the place, they’ll see an impressive badger snuffling around the place, as a halfling cheerfully ventures forth to greet them – they obviously have found sanctuary…but they’ll only realize that if they can take their eyes of the oak tree growing from the ceiling of the inside of this place, sending sparkling, warm magical light down upon the common area.

The respective rooms are no less enchanting and the tavern comes with information regarding the cost of staying there. As always, we receive exceedingly detailed rumors to kick off encounters or even adventures, with read-aloud text for each rumor – nice! It should be noted that the 5e-iteration changed e.g. the disease mentioned in one rumor and the critter mentioned in another one – neat level of care here. Similarly, the events that take place here, 8 of which are provided, sport a sense of the relaxed and benign, if weird: When gripplis challenge for a friendly wrestling bout, remarkably good-natured quicklings enter the tavern or visions are to be had, you know that adventure and a nice diversions are right here. The pdf, just fyi, also goes into mouth-watering details regarding the food served here.

Beyond Beatrice the hafling who acts usually as greeter (and clocks in at challenge 7 – don’t mess with her or her badger Lola – as has become the tradition, she has some nice abilities…though one ability which lets her reassign damage between her and her companion should imho be a reaction, not an always on option that does not require any sort of activation), this fantastic place’s owner, at least one of them, mind you, would be Shadril, a dryad, whose stats are provided. Her owl companion, however, has not made the transition to 5e and this would be as good a place as any to complain about the lack of italicization of spells in all statblocks.

And there would be Crescenzo, an old man smoking a pipe. Yep…and much like Elminster, Gandalf, Veranthus and similar icons, it is a damn BAD idea to cause any trouble around this fellow. He is peaceful, yes…but…well…I could spoil what he’s really capable of, but that would be no fun, now, would it? *cough* challenge 25 */cough*Yep, stats provided. No, he’s not the ole’ cliché archmage. No, he’s not a fey lord in disguise either. Yes, I have seen the trope before, but the execution is pretty fresh.

The tavern also includes Kaapo, a grippli and Thestrel, an elf, who are both engaging in various arm wrestling contests. Their 5e stats are pretty creative as well – with the grippli having the potential to deliver knock-outs and Thestrel having several neat rogue-y abilities…though, as a nitpick, sneak attack lacks the 1/turn restriction that monsters/NPCs usually sport.

The pdf also sports a non-statted fairy that causes mischief with all but the dourest patrons. Speaking of which: There would be Kachina. She has a pumpkin head and walks on vines and is covered with grey shrooms that made her face…well, somewhat disturbing. She is a plant creature with a temper (and slightly more potent in combat than in PFRPG’s iteration)…and she is not the only plant-being here: A treant named Burtsch (stats provided) who has lived through several bouts of deadly fungal diseases, which left him quite sociable and only barely larger than an elf, also frequents this place. He’s been modified with the accursed template, in case you were wondering. There is also a sprite called Tat in the Hidden Oak. Padraig O’Bunley the leprechaun would be the final character featured here – alas, I don’t have 5e-stats for leprechauns, so getting those would have been nice.

Now, in a piece of 3rd party camaraderie I enjoy, the pdf gives credit where credit is due and instead of trying to reinvent the wheel, features 4 of the culinary magic recipes originally debuted in the amazing “Letters from the Flaming Crab: Culinary Magic” by Flaming Crab Games. Nice: Tow of these have been converted from aforementioned book, while two other ones are NEW ones; though, obviously, 5e-players and GMs have not seen these before: Caramelized mushrooms to fortify versus poison, friendship-inducing herbs, better disguising and easier movement can be found here. Much to my chagrin, alas, the recipes that allow you to actually cook these recipes have gotten the axe. If you’re like me and enjoy cooking/baking and making non-fast-food for gaming, that may be a bit of a bummer.

Editing and formatting are very good, though there are a couple of minor glitches. Layout adheres to Dire Rugrat Publishing’s two-column b/w-standard and is printer-friendly. The pdf comes fully bookmarked for your convenience. The artwork featured herein is a blending of original pieces of b/w-artworks and some stock pieces: Ken Pawlik’s drawing of the mug of Crescenzo, just fyi, is pretty much the best drawing I have seen by his hand…it’s pretty neat. The cartography is less barebones and more creative than that featured in earlier installments of the series as well.

Kelly & Ken Pawlik’s “The Hidden Oak” is an amazing tavern, but the 5e-iteration does fall a bit behind the PFRPG-iteration in its details. Some builds are cool and I love the conversion of culinary magic. There are a couple more aesthetic glitches here, though and the lack of the recipes made me pretty sad. All in all, this is a very good, evocative tavern, but it feels like it falls slightly short of the PFRPG version’s excellence. My final verdict will clock in at 4.5 stars, rounded down to 4.

You can get this tavern here on OBS!
Endzeitgeist out.