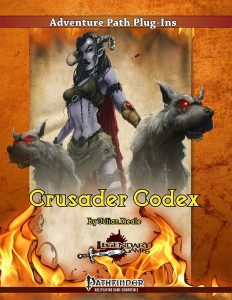 This collection of NPCs clocks in at 38 pages, 1 page front cover, 1 page editorial, 1 page ToC (with CR/MR-notes), 1 page introduction/how to use, 1 page SRD, 2 pages of advertisement, 1 page back cover, leaving us with 30 pages of content, so let’s take a look!

There never was an AP so in need of more challenges and expansions than Wrath of the Righteous. While I love the story, personally, I’d only run it with a gazillion of Legendary Games supplements to avoid the PCs curb-stomping everything. Anyways, this means you need stats and I don’t know about you, but I don’t always have the time to crunch x statblocks. Enter this book – where the excellent unrighteous Villains was about adding in NPCs and adversaries and their subplots, this one would be the collection of more “generic” statblocks for more rank and file beings.

That out of the way, this does not mean that the presentation lacks notes on tactics or the like – quite the contrary! It just means that you should expect something akin to the NPC Codex by Paizo on a smaller scale and tied directly to the respective parts of WotR. Demons invading town? There’s a CR-appropriate statblock for that here. The statblocks come with automatic bonus progression notes for the respective builds, just fyi! One step beyond that: The pdf actually begins with a handy table of CEL+Tiers/party-level/book progression through the AP, providing a great guideline from the very get-go. Additionally, the supplemental pieces of advice provided here should be pretty helpful for not only reading the entries, but for GMs of the AP in general. It’s only a little introduction, but it adds that little amount of extra care, feels like it’s going the extra mile from the get-go.

Got that? Great! We begin this collection with a tiefling witch at CR 1 (and a disturbing artwork)…but adversaries are not everything: Two slayers at CR 2 and 6 as progressions can be found herein as well.

A half-orc paladin at CR 6, a broken soul unicorn (!!!) oracle, a fiendish troll inquisitor…notice something? Yep, Julian Neale went all out this time! I mean, who could say no to a fiendish redcap barbarian? An oracle/pala-combo is cool…but personally, I’m partial to evilly-grinning over shadow demons with rogue levels! There also would be a CR 11 dwarven vivisectionist to be found, a fated champion orc skald at CR 11, and I can’t wait throwing a night hag mesmerist (oh yes!) at my players.

Sounds too freaky for you? There also would be a neat human cleric build, all vanilla…but personally…I get my grove on when looking at blight druid/medium (relic channeler) multiclasses (yep, with fighter/medium (relic channeler)/ranger cohort! What about lilith, an awakened devilbound cephalohore sorceress? OH YES! bebilith fighter? Yes! Stradaemon fighter creature? Yes, please! What about a CR 20 glabrezu antipaladin with unholy good saves and a beautiful damage output and enough defense to potentially actually survive to attack PCs? What about a massive mythic immense mandragora at CR 20/MR 8 (including a swarm?) or a tiefling investigator/guardian (who lacks her MR-rating in the header in a minor hiccup)? Pretty amazing!

And yes, the aforementioned immense mandragora and the swarm, which could come right out of the Berserk video game do get their own statblocks here as well. Now this would be my overview of the statblocks, but it certainly deserves mentioning that designer commentary and EXTENSIVE tactic notes actually help run these engines of destruction.

Editing and formatting are very good, I noticed no grievous glitches. Layout adheres to legendary Games’ two-column full-color standard with a lot of fiery orange employed for the WotR-plugins. The pdf features several neat full-color artworks, though they will be familiar for fans of Legendary Games. The pdf comes fully bookmarked for your convenience. As for statblock accuracy, I have reverse-engineered a couple and encountered no issues;

What happens what Julian Neale finally unleashes the daring creativity lurking? When he lets loose that rampant Id and makes critters and builds beyond the normal, that dare to kick your behind? Awesome, that’s what! Don’t get me wrong – this has plenty of options that will satisfy more conservative tastes, but oh boy do I love this book. It’s bar none my favorite statblock-centric offering released by Legendary Games so far. The builds and NPCs are so creative and cool, I really want to use them…and the fact that there are some that dare to be a challenge for capable groups is a HUGE plus for me. Beyond that, the tactical notes provide an excessive level of support for the hassled GM and render actually using the book much simpler than it otherwise would. This reminded me of Rite Publishing’s legendary Faces of the Tarnished Souk-series in that its builds go one step beyond what you’d see in the default monster codex in support, creativity, etc. In fact, this felt more like a proper NPC-book that a collection of anonymous stats to me, mainly because there is so much love oozing from them.

This is a great, fun collection of NPC-stats and should be considered to be a definite recommendation, not only within the context of WotR, but for any GM looking for some challenging, diverse builds. My final verdict will clock in at 5 stars + seal of approval.

You can get these amazing NPC-builds here on OBS!
Endzeitgeist out.