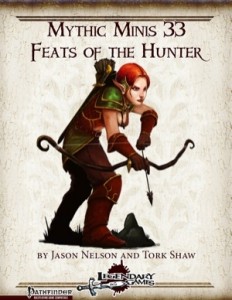 -Advanced Ranger Trap: Increase Perception, Disable Device and DC of your ranger traps by mythic tier. Additionally, increase damage-output by 2x mythic tier in the first round or to affect +1 creature with non-damage-dealing traps. Additionally, expend multiple uses for longer duration traps depending on type and also slower DC-decrease. Awesome option to make the traps more useful and versatile!

-Crossbow Mastery: Double all bonuses gained from class abilities or feats that affect crossbows, up to max your mythic tier. Nice tie in to mythic rules and helpful to make crossbows suck less.

-Point Blank Master: Swift action to ignore armor + shield AC bonus and no dex-bonus to next shot. Also, spend 1 use of mythic power as a swift/immediate action to automatically confirm a critical threat on an attack made against an adjacent foe. This feat feels a bit over the top – a lot of very powerful benefits for just one feat, too much in my book. Especially the dex-ignore caveat is nasty.

-Superior Ranger Traps: Traps are considered magical for overcoming DR-purposes and can bypass other forms of DR as if they were weapons with an enhancement equal to 1/2 your mythic tier. Energy-damage dealing traps ignore 5 resistance, +5 for every 2 tiers. Also, use mythic powers to duplicate create pit and at higher levels, spiked pit and hungry pit and finally, acid pit. Neat!

Jason Nelson and Tork Shaw deliver a cool mythic mini here – especially the trap upgrades are pretty awesome and some rules-solutions are very interesting. That being said, I consider Point Blank Master very strong and in need of a slight nerf. Hence, I will settle on a final verdict of 4.5 stars, rounded up by a tiny margin to 5.

You can get this nice pdf here on OBS and here on d20pfsrd.com’s shop.