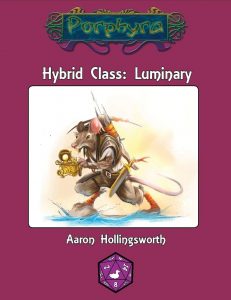 The luminary class, chassis-wise, receives d8 HD, 4 + Int skills per level, proficiency with simple weapons and light armor and also receives 3/4 BAB-progression as well as good Ref- and Will-saves. The luminary receives spontaneous spellcasting governed by Charisma, with maximum spell level being 6th. His spells are drawn from the mesmerist list.

The luminary’s signature tool and skill set would be occult photography – they begin play with a camera obscura that requires access to an alchemist lab to properly clean and set up each day. This device only works for the respective luminary and its hardness increases over the levels. It can be repaired pretty easily and taking a photograph (including loading etc.) is a standard action. A regular photo generates a flash of harmless light in a 20 ft.-cone. The less harmless manipulations, however, can be used a number of times per day equal to character level + Charisma modifier. It should be noted that taken photographs are tracked separately – class level +ü Cha-mod of these may be taken at a given level.

Speaking of manipulations: The luminary can adjust the flash of the camera to inflict fire damage in the area affected, dealing 1d6 points of fire damage, +1 d6 at 3rd level and every 2 levels thereafter. As a swift action, the area of effect can be adjusted to instead affect a 20 ft.-long, 5 ft. wide line. The Ref-save to halve the damage scales with levels, following the 10 + 1/2 class level + Charisma mod-formula. 11th level increases the range to 30 ft. First level also nets hypnotic stare.

At 2nd level, the luminary receives a manipulation, basically the talents of the class – another one is gained every even level thereafter. These include energy substitutions for the aforementioned fire flash, making the camera double as a spyglass, making alchemical photographs (that double as potions), getting a kirlian camera-style aura lens…and, VERY cool from a tactical perspective, setting a timer for the camera, which opens up all types of cool tricks! Higher level manipulations make use of the belief that cameras capture your essence, inflicting Wisdom or Charisma drain. Short-range staggering that increases in severity over the levels, higher-level dispels via the flash…the array of manipulations is damn cool. Similarly, higher level luminaries may elect to take more photos in a given round, generate progressively more potent cloud-effects or learn mesmerist tricks that can be implanted via photographs. And yes, going Fatal Frame /project Zero on spirits (and even the living!) is very much possible! Heck yes!

The propensity for light and darkness also net the luminary darkvision at 2nd level alongside bonuses to saves. 3rd level nets bold stare, with every 4th level thereafter imposing further effects. Once again, a sufficient diversity of options can be found here. 4th level nets a scaling dodge bonus to AC and Reflex saves. The capstones, 4 of which are provided, contain attribute-bonuses, powerful scrying or even a phylactery-style Dorian Gray-photograph. The final option duplicates 1/day sympathy, which is not properly italicized in the text. It should also be noted that

As is the tradition with Purple Duck Games-classes, we receive a massive array of favored class options beyond the confines of the core races, including rarer races and those found within Porphyra. The favored class options presented are pretty neat. The feats contained herein extend beyond the default +x class feature uses and include longer lines when using the flash in lines, preparing the flash for increased DCs and limited daily use circular flashes in a 30 ft.-radius. Instant photography development and ranged feints can also be found here.

3 mundane pieces of equipment, the new photographer profession and considerations of the introduction of photography into a fantasy context further help making the insertion of the class as seamless as possible, with a sample CR 9 ratfolk luminary sample NPC closing the pdf.

Editing and formatting are okay, bordering on good, on a formal level. The rules-language, however, is pretty precise, even though imho an introductory sidebar explaining the difference of uses, photos, etc. would have made the class a bit easier to grasp – didactically, it could be simpler. Layout adheres to Purple Duck Games’ two-column color-standard, with the awesome cover art being the only one in the book. The pdf comes fully bookmarked for your convenience.

All right, before we begin, let me go on a slight tangent: Photography is a crucial part of our cultural development. There is a phenomenon called the “visual turn”, which denotes photography as a paradigm shift in our development as a species. Beyond its depiction in Hawthorne’s classic “House of the Seven Gables”, daguerreotypes changed how we perceive the world and ultimately, our selves: Up to this point, only portraits and thus, the filter of art and patronage, was used to depict us, with mirrors being expensive. As such, the unflinching and harsh rendition of our as-is-status and the immediacy of the experience (in spite of early photography requiring a LOT of long sitting around sans moving) changed our focus; it was no longer the written word that held primacy of concepts – a single photo could convey a cornucopia of information. It also went hand in hand with the 3 grand insults to the human’s ego, tying into the third of them – we are not only not masters of our own minds, we are also not masters of our perception.

The subjectivity of our own ways of seeing the world and the anxiety resulting from seeing in black and white an artifact of, ostensibly, a more precise reality, can directly be linked to the increasing prevalence in horror and ultimately, the dethroning of the concept of an observer’s objectivity, while also establishing a hierarchy of power centered on the gaze that would later be instrumental in our reforms of the systems of law and punishment in general. Yes, the topic is very near and dear to my heart.

Anyways, the pdf, alas, uses “camera obscura” as a name woefully wrong; a camera obscura is basically a projector, a primitive form of cinema, if you will – the term was coined by Johannes Kepler, who btw. also noticed that our retinas receive an inverted and reversed picture of the world, which is subsequently realigned by our brain, but that as an aside. The camera obscura was, in essence, a farther developed take on the pinhole camera that shares several properties with the laterna magica.

While both Descartes and Locke used the camera obscura as a metaphor for human understanding and while its shape was later developed into that of a photographic camera, it is NOT, I repeat, NOT a photograph taking camera as we understand the term today. It is, however, correct that back in the day when daguerrotypy was invented, there were no terms for photographic cameras and the first of daguerrotypes were shot on what amounts to a camera obscura by the terms then employed. Utterly useless tangent for the functionality f the class? Perhaps – but it is still something I felt the need to clarify. Ähem, where was I?

Oh yes, the profane banalities of analyzing the PFRPG-class. Let me lower my brows and get rid of my pince-nez. Aaron Hollingsworth’s luminary, from a design-perspective, is a well-made hybrid class in every sense of the word. The class employs complex mechanics in a cool combination and feels distinct and different from its parents. More amazingly, it indeed plays differently from both mesmerist and alchemist and has a concise identity that extends beyond the confines of either parent class. It is, in short, different than the sum of its parts, which renders it a success in my book. While the tangent above may sound like a stuck-up scholar’s nerdrage (and it kinda is), that should in no way take away from the fact that this class manages to translate photography into gaming mechanics in a concise and well-presented manner that retains mechanical viability and relevance. In short, this is a very good hybrid class.

Granted, the editing could be tighter and similarly, the concept is not even close to being exhausted – the theme and engine provided practically demand expansion and can carry a vast amount of further tricks. In short – this is actually a hybrid class where I wished it had more room to shine and one where I certainly wouldn’t mind seeing more. Oh, it is also, to my knowledge, the author’s first book I analyzed and as such, it receives the freshman bonus. Let it be known that I am pretty impressed and hope to see more of this quality…and more luminary material. My final verdict for this class clocks in at 4.5 stars, and in spite of the hiccups, the verdict is rounded up to 5 due to the freshman bonus and the strength and execution of the concept.

You can get this cool, rewarding hybrid class here on OBS!