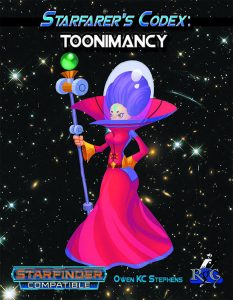 This installment of the Starfarer’s Codex-series clocks in at 10 pages, 1 page front cover, 1 page editorial, 1 page SRD, 1 page advertisement, leaving us with 6 pages of content, so let’s take a look!

So, the introduction specifies that technomancers can access magic tied t more than physical technology, mentioning search engines (digimancy), dubthurgy and spamorcery. Damn, now I really want a spamorcery-specialist! Anyways, younger technomancers (and those nerdy/young at heart) enjoy toonimancy, drawing upon concepts popularized by cartoons. This write up also mentions the Tooninomicon. It often comes in physical versions and contains this warning, in dozens of languages: “Warning! You are not B. Bunny!” Oh yeah? Yeah!

Anyways, we get a brief list that codifies spells by levels, just before we get the spells themselves. Anvil has a Medium range and comes in 6 versions – one for each spell level, and it targets a single creature or object, dropping an…anvil on them. Or, you know, pianos, safes, etc. Comparing the respective damage values with Starfinder’s spells, I have no complaints here. Ban hammer also comes in a version for level 1 – 6, and generates a massive, two-handed hammer with “BAN” written on it. It is massive, unwieldy, and critical hit effects as well as special weapon properties make sense. You btw. attack with caster level + key ability score. You may choose to end the ban hammer upon hitting a target – if you do, the target must save or be forced to move away from you. I’d love to have that IRL sometimes…

Boomspittle is a 5th level spell that may only be cast as a reaction while being an the area of a multiple-squares-targeting weapon attack that fails to hit you, or against which you successfully save. You inhale the weapon effect, and may then blow forth a harmless puff of smoke, or exhale the weapon’s blast! Heck yeah!! Control argument is a 1st level spell and makes the target disagree with everything you say. This made me smile so widely… The 3rd level spell coyote curse makes it impossible for the target to use technological or hybrid weapons, vehicles or equipment, including armor upgrades, but nor armor, without taking an extra move action to fix an annoying difficulty, a bizarre slip. I love this spell. I’m spo going to use its effects as a really brutal high-level terrain hazard!

Finger in the Muzzle is a 1st level spell that may only be cast as a reaction while adjacent to a target firing a ranged weapon. You put the finger in the muzzle. The target saves, and on a failure, for some backfire shenanigans. Neat! Flat foot is 2nd level and smashes a foe taking bludgeoning damage comically flat, making them…flat-footed. That is so funny on a meta-level, I actually laughed. Passpaint is a 4th level spell that lets you paint a gate in the time-honored tradition. Really neat. Shave-and-a-hair-cut forces targets to make a Will save or loudly proclaim “two bits” as a result of your knocks and take a move action or guarded step towards you – interesting 1st level spell. Theme music lets you hear your own theme music, inaudible to anyone else. This penalizes Perception…but it makes you automatically aware of danger – the music changes! It also can allow you to get a hunch of a given situation.

Editing and formatting are top-notch, I noticed no hiccups on a formal or rules-language level. Layout adheres to Rogue Genius Games’ two-column full-color standard and the pdf sports fitting, cartoon-y artworks. The pdf does come with basic bookmarks, in spite of the brevity.

Owen K.C. Stephens’ toonimancy is amazing. The spells are genuinely funny, immaculately balanced and befitting of the quality we expect from Strafinder’s Lead. This is an all-killer, no filler collection of inspiring spells with even the fluff providing some damn cool ideas. I really found myself wishing for more, and indeed, in Starfinder, this works perfectly regarding aesthetics. 5 stars + seal of approval.

You can get these amazing spells here on OBS!