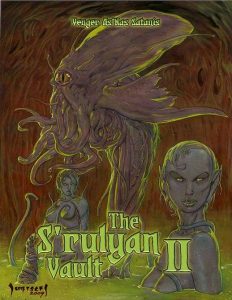 This review was moved up in my reviewing queue as a non-prioritized review at the request of one my patreons.

So, the first thing you need to know would be that this product is a map, a massive map, to be more precise. Drafted by the talented Glynn Seal as well as Monstark and Fizzbig, this map comes in two iterations: One would be the classic blue and white – and yes, if you zoom in, you can see the squares. Zoom in? Yeah, this thing is humongous. As in: You can make that a super-sized-poster-monstrosity. The map comes in 300 dpi, so yeah – you *can* actually make that happen without everything looking bad. For the tablet-users: The blue/white classic version clocks in at about 30 mbs.

Now, here I may be prejudiced, but for me, the true star would be the second version of the map – just as big, the same dungeon, but infinitely more atmospheric. Why? Because it sports a used parchment look with copious amounts of blood spatters – considering the eldritch feel of the complex, that not only seems appropriate – it really made me crave a print version of the map – to shred up and make the PCs hunt for. Now one of the many, many rooms of the map does sport Venger’s name and the triple Kort’thalis dragon heads, so if you’re a stickler regarding that kind of thing, be aware of this peculiarity. This one btw. clocks in at 116 mbs.

On the plus-side, there is a sense of gravity and gravitas to the dungeon: There are rooms, half-shattered by tectonic shifts; tunnels and caverns leading into obviously hand-crafted dungeon rooms…and there are the details. In some rooms, you can spot glyphs – what do they mean? Those things next to the underground river flowing through – what are they? Suckers? Eye-stalks? Those strange toadstools there…or are they spotted, strange rocks or something weirder? There is an underground sea vanishing in the floor to re-emerge; there are yawning, black chasms – some may be wells (Don’t go down!), some may be dimensional vortices. Oh, and this is Kort’thalis Publishing we’re talking about. There are tentacles. Three different types, actually! Altars, what may be weapon stands or mannequins, statues…heck, this one growth may well be a forest…or just some strange, organic growth. The map is precise in what it shows – just enough to jumpstart the imagination without shackling it to one concept. With one obvious exclusion to that rule. Tentacles. Surprise. 😉

If that does not suffice, the map does come with a short, system-neutral dressing booklet, much like its predecessor: This booklet comes in two versions, one of which is more printer-friendly than the other – kudos there. The dressing booklets come with extensive, nested bookmarks and cover 15 pages; of these, 1 page page is devoted to the front cover, 1 to the Kort’thalis glyph and 1 is the editorial, leaving us with 13 pages. As always in Venger’s offerings, the b/w-artworks featured are really nice. Three such full-page artworks are provided – two battling dragons, a weirdly mutated flumph that is kinda looking like an animated, dangerous sextoy for males and a naked woman in chains being held in front of a huge, obese version of a/the devil – and yes, he is sporting a non-erect member. If that (or the cover) offends you, then this may not be for you.

Okay, so far regarding these things, so how do we start this booklet? With actually salient bullet-points regarding dungeon-creation/population that actually helpful! We follow this up with random tables – one to determine the sound of the dungeon – d4-strong. More gonzo would be the 30-entry-table that provides things that happen when you camp in the dungeon. PCs may dream of drinking blood from a witch’s teat (which may curse them), encounter frickin’ murder-clowns, a magic item has gone missing – this table of complications is actually cool and well made – the table does include rocks falling (but sans necessary PC-death), being marked in various ways, being taken prisoner – the table is definitely creative and well-crafted, without being too weird or too tame or too random – it is a helpful, well-made array of strange things. Okay, so the next thing is actually credited to me, though I mentioned it to Venger in the passing – it is something that I figured would suit his tastes and frankly, I wasn’t even aware he ran with it. I am a big fan of using monster parts for magic components etc. – and Kort’thalis Publishing’s books tend to gravitate to the visceral, so yeah – we get a massive meta-table! 30 monster parts (including circuit boards, eyes, etc.), 4 removal difficulties, 12 different effects (all system neutral – increased spell power, virility, healing – you get the idea!!) and 6 entries on how long the benefits last. I really like this table – it is elegant, easy to use in a given rules-lite system and works smoothly.

Speaking of working smoothly: There is also a massive 100-entry-table – and if you#re running an eldritch dungeon/mega-dungeon/underdark, then this table will most assuredly help you. You see, we get faction quirks! From never or always using a peculiar weapon type, drinking the embryonic water of giant worms, covering the underside of their feet to not looking others in the eye, writing haikus after each brush with death…there are also weird ones: Like ritualistic combat with demon dungeon vultures strapped to them. So yeah, from the exotic t the more regular eccentricities, the table is rather nice.

Of course, most smart PCs will enter and leave most dungeons at least once – 6 entries for restocking dungeon, 4 additional effects (traps reset, evidence of sorcery (with a brief 12-entry sub-table, etc.) – nice ones. There are also 20 sample, fluff-only hirelings and 4 degrees of hireling loyalties – Name, race, class and miscellaneous notes are provided.

Now, the ardent reader may have noted that this book has the “Almost system neutral”-tag on my homepage – well, there is a reason for that: We get a new creature (most suitable for Crimson Dragon Slayer, but converted easily enough); 6 hp, armorless, 1d6 atk dice pool, ascending atk – the glitter worm, aka gem slug. These dangerous vermin lair among treasure and those bitten risk turning into them within 24 hours on a failed save. There also would be a new magic material – Zoth, which may be the liquefied remains of a Lovecraftian deity: It can enchant items, can be made into alchemist’s fire, animate objects, causes mutations – in short, it is a fun chaos-infusion.

Okay, so, the maps are amazing. But more importantly, the booklet this time around is INSPIRING. One of my criticisms of the first Vault was that it tried to at once tell a VERY specific story and then mixed the super-specific with the really widely-applicable. This booklet is much smarter – it is basically a great companion piece to the aesthetics of the maps: It shows you just enough to kickstart your imagination; it is smart, precise and its rules, where present, are as concise as possible within the paradigms set for such a system-neutral dressing file. It also retains Venger’s trademark characteristics and in fact, represents perhaps one of the best dressing-collections he’s produced – the material ranges from the mildly raunchy to the grounded; it does not drown the reader in weirdness, but still leaves plenty of stuff to go around. In short, it represents one of his best dressing-collections to date. It is unique and saturated with his distinct voice, to the point where it is pretty obvious that you won’t encounter significant overlap with other dressing files. As a whole, we thus get an inspiring supplemental booklet and well-made, high-quality maps. In short: This is cool and worth checking out. My final verdict will clock in at 5 stars + seal of approval.

You can get this high-quality map and its accompanying dressing booklet here on OBS!