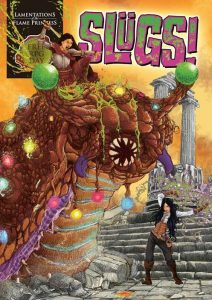 This review was moved up in my review-queue as a non-prioritized review at the request of my patreons. The review is mainly based on the softcover of the book, which I obtained at Gencon 2016, though I have also consulted the PWYW-pdf.

So, what are the base mechanics of the creatures within? The armor rating assumes an ascending AC and a base unarmored rating of 12. Movement assumes an average human to have a speed of 120’. HD determines the number of d8 hit points and the Attack Bonus. Morale ranges from 2 – 12, with higher ratings denoting better morale. Unless otherwise noted, slugs can attack with both bite and tail in one round, but must attack different targets. 10 lbs. of salt per HD can provoke a save-or-die situation for the critters, but lesser amounts don’t cut it – here, I’d have enjoyed a bit of a scaling more. Damage based on HD, for example – RAW they either almost die or don’t care. Size-wise, slugs clock in at about 5’ per HD.

Now, since I have already mentioned the one controversial critter herein, we may as well start with it: The aforementioned HD 7 penis/vagina-slüg, the Love Slüg, is a motivator, muse…and the write-up does provide rules for successfully satisfying the slüg – and that is REALLY exhausting. But if a character *does* manage to satisfy the slug, it will then satisfy the character….which is extremely pleasurable and even nets 1d6 levels! However, these levels do slowly fade and after you’ve gone slüg, there’s no zurück! (Zurück = German for “back”) I.e. the character becomes solely attracted to slimy creatures. And yes, they usually are guarded by a mixed-gendered harem. Obviously.

Okay, if you were offended by this, well, there you have it – I warned you. If not, then read on and we’ll take a look at the other slügs herein. On the more conservative side, we have the HD 12 Spider-Slüg, which is pretty much what you’d expect – only that it takes its slime trail and whips it around like a sticky rope, while wiggling it around. This is the most conservative creature herein and perhaps the least interesting one. The Ocular Slüg, at 6 HD, is weird – it is a slüg all about sensory information and can look through the eyes of millions of agents, should it choose to. It also can switch the POVs of two characters on a failed saving throw – permanently. Oh, and not just characters. Insects etc. as well. This can prove to be a catastrophic experience for those suffering from it, and accessing the overwhelming sensory input of the slüg is problematic as well. Thankfully, you can make it your ally – provided you can put up a good Morris dance. Also on the more conservative, if disgusting side of things would be the Vomit Slüg – with 10 HD, these critters sport 8 different types of radioactive vomit, ranging from acid, full-blown radioactive vomit to glue and slime monsters (stats provided) – this critter should work well in most games. Oh, and the vomit smells. I can see PCs hating to fight this fellow.

The Rock Slüg, at 13 HD, has become infected with contagious stone – fighting it makes your armor rating go up – temporarily at first, but take too much damage and it may become permanent – which requires a mason to look after your petrified components to repair damage…alas, if this damage to the stone parts is healed and the character later cured of the contagious stone, she will find the repaired stone painfully embedded in her…ouch. The slüg was also fire rocks at range and roll into a ball to roll downhill and squash everything.

Want a taste of the weirder? Well, there are a couple of slügs herein that can change the course of whole campaigns. E.g. Kelvin Green’s guest-entry herein: The 8HD Slügatron! It’s basically a heroic transformer that can change between slüg form and humanoid robot form – artworks for both are included. And yes, PCs that are Enlarged can Tinker with the blaster to use it. The entry comes with 10 sample adventure tasks/missions slügatron is currently engaged in. Yeah, this happened. Okay, not weird/gonzo enough? Muscle Slüg. The slüg has arms, 11 HD and may perform feats of super human strength, generate shockwaves, etc. Ooooh yeah! Oh, and it may flex instead of attacking. Flexing is so amazing, it can break down the physical composition of matter and change it – turn wood to iron, etc. Larger objects can be affected by a full turn of flexing, brother! Oh, and the muscle slüg may flex to make a target in the vicinity pull a muscle, rendering the limb useless for 1d6 days. Minor complaint from a rules-perspective: The flexing has no range, which is brutal, as there’s no save to resist it.

The Mentallo Slüg clocks in at 8 HD and begins with a nice in-joke that’s resolved on the final page of the book. Anyways, the slüg is incredibly intelligent. It is probably the smartest creature on the planet and may predict a variety of terrible cataclysms…but unfortunately, it suffers from the Cassandra complex – no one listens to it. It’s a slüg. Would you listen to it? Figured. Anyways, it comes with 2 1d10-mini-tables for obscure tasks that the slüg needs you to complete. These include assassinations, sinking ships and all manner of problematic tasks that look senseless and strange to…well, pretty much everyone but the hyper-intelligent slüg. Still, this slüg could conceivably make for an uncommon BBEG or act as the benefactor of the PCs, sending them on guerilla tasks.

At 8 HD, there also would be the creature on the cover – though it is significantly cuter in the artwork in the book, the Christmas Slüg. When the slüg’s coming, settlements will haul trash in its way; the sugary slime will be collected by the villagers for delicious treats. The slüg also sports a variety of luminescent boils that often contain goods – candy, gems, gold…but, you know, these boils may actually explode! Oh, and popping these lights may cause regular slugs to feature similar lights. There also is a 12 HD Breakfast Slüg: It sports a bowl-shaped indentation on its back. Inside is a milky liquid, with a rotating metal rod inside – this rod acts as a radar for metal…and this pseudo-spoon is extremely magnetic. Metal is attracted to the spoon, wiggles down and is dissolved in the liquid. In said liquid, the slüg also sports biscuits, which may be the slüg’s excrements – but they are very nutritious. These can be used as rather excellent, but quickly spoiling rations. Really cool.

The 11 HD Hypno Slüg prompts a saving throw upon seeing it – merely witnessing it may be enough to have a series of complex suggestions embedded in the character’s psyche: The character may be forced to donate items, be incited to murder allies while sleeping, steal, etc. 12 sample suggestions are provided and there is a chance that any combat with the hypno-slüg will actually be just in the heads of the PCs… There also is the HD 10 Glass Slüg, which may generate inverted twin duplicates that become real…and damaging it is dangerous, as shards spray forth and more serious damage can cause light-absorbing leaks…and killing the creature will make all light intensify excessively – looking at the sun may blind you…

Speaking of explosive slügs: The HD 16 Swiss Army Slüg sports embedded halberds that reflexively strike assailants. Oh, and it stores musket barrels and sports tools as well as a black powder like compound – killing it may blow it up big time. Cool landsknecht-slüg! On the hazardous side of things that represents a serious problem, there would be the 8 HD Sluggish Slüg – merely being within the same vicinity of the slüg makes creatures suffer from progressively worse states of disenfranchisement. There are 5 stages of this horrible sloth presented, all with progressively worse effects…oh, and the effect’s range? 3 miles. The presence of the slüg can grind whole cities to a horrible stand-still. Thinking through the consequences, the adventure pretty much writes itself. Pretty amazing!

Speaking of which: There last critter would be the HD 12 Acid Slüg – it loves music and wanders the field. If threatened or if anyone expects it to do something actually useful, the stress will cause the slüg to perspire – and unfortunately, the sweat vaporizes when it hits the air…and it also acts as a really potent psychedelic drug! From time seeming to slow to witnessing the truth of the cosmos (not pleasant for non-magic-users), there are 8 different, strange effects that the Acid Slüg’s trips can cause.

Editing and formatting are very good, I noticed no serious hiccups as a whole. Layout adheres to a nice two-column b/w-standard and the artworks of the slügs are funny, making some even seem a bit adorable. The pdf comes fully bookmarked for your convenience. The print-version is a nice A5/digest-sized booklet.

James Edward Raggi IV, with help from Kelvin Green (who also took care of the interior artwork), delivers a truly unique, gonzo bestiary – if you enjoy the uncommon and aren’t offended by the content, then chances are you’ll find something cool herein: From the hyper-gonzo to creatures like the Slügatron to the Swiss Army Slüg, which could be the creation of an insane magic-user in pretty much any setting, there is something herein for many campaigns. The creatures are generally interesting (with the exception of the lame Spider Slüg) and sport some unique tricks. Oh, and then there is the PWYW-aspect of the pdf: It most assuredly is worth checking out. If this was a commercial offering, I’d consider it worthwhile as well, particularly if you’re looking for something strange. My final verdict will clock in at 4.5 stars, rounded up due to the PWYW-nature.

You can get this bestiary here on OBS!