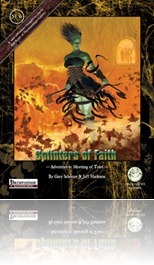 This being an adventure-review, the following text contains SPOILERS. Potential players might want to jump to the conclusion.

This installment of “Splinters of Faith” brings us to the Monastery of World Sundering, where a passive, Illmater-like god was once worshiped – before the monastery was swallowed by a now receding glacier, that is. The monastery has been repopulated by a ragtag-band of strange monks (including a bugbear) and would gladly help with the ceremony to anoint the Scepter of Faiths, in spite of their rather rudimentary grasp on the teachings of the god Voard. However, the statue necessary for the task has been stolen and so it falls to the PCs to reclaim it.

This installment follows the tried and true formula of the series to the letter, i.e. we get the good temple (the monastery) as a write-up and then the adventure centred on the evil temple. No transition is provided for and once again, the wilderness-section (this time around rather short) features no new polar hazards or the like. A player’s map for the wilderness-exploration is once again missing and once again I’m annoyed by the fact that I’m supposed to draw one myself. Remembering a recent review, I did recall a good option, though: Scavenge the excellent ideas for survival in the cold from the rather lacklustre “Ursined, Sealed and Delivered” and add them to this adventure’s wilderness and you might get something out of them. (Alternatively, use Open Design’s Northlands – still THE resource for adventuring in cold confines, at least in my humble opinion…)

This lack of hazards unfortunately extends towards the cool (pardon the pun) dungeon of this installment – housed within the glacier, guarded by a tribe of Yetis and a white dragon, the statue remains and the PCs will have to find a way to kill the opposition and get the statue back. Oh yeah, and then there’s the abode of an arch-wizard and an option for the PCs to kill his family and make a powerful foe that is mostly unrelated to the whole arc. I think the section would have benefitted from this being cut in favour of some more exciting natural hazards, as the dungeon pulls the tries tropes “fall into cold water” and “slippery ground” without using them to the advantage – Yetis in PFRPG generate cold and thus could use water and their chilling abilities to create rather elaborate structures, traps etc., especially under the guidance of their new leader, who is in fact an ogre mage in disguise. Ice-bridges etc. are nice, but when e.g. compared to Ben MacFarland’s “The Breaking of Forstor Nagar”, the glacier-exploration felt rather like it did not use its full potential – if the glacier is receding, why not add cracks, tremors etc. while the Pcs explore it? Add some magical effects to sections of the ice? Anything really. There is a remorhaz there, why not use it?

As written, the exploration is, once again, a good dungeon, but nothing to write home about. Another wasted potential would be getting the statue back through the dungeon – if e.g. the place was collapsing, the task would be much more daunting and no true guidance for the DM on how to handle the extraction is given. Once the idol has been returned, the PCs might even have preserved Voard’s holy texts and reignited a faith that is rather obscure and thus gained another blessing on the way to restoring the Scepter of Faiths.

Editing and formatting are good, I did notice one number missing on the maps, though. layout adheres to the 2-column standard and the b/w-artworks are nice, as are the maps. I already said it: Again, no transition, no player-friendly maps and again: The adventure could have been so much more than it is: The fact that it takes place in the frozen reaches of the world almost doesn’t fracture into the adventure if we ignore the standard cold-dangers and slippery surfaces – the dungeon feels not like a glacier, but rather like a white-washed regular cave-dungeon.

I’ve ranted on long enough about how this scenario falls short on what it could have been and while I’ve come to expect the series to fall short of its potential, this one does so by a larger margin than others – while the new faith is intriguing and the brotherhood depicted cool, the wilderness suffers from the old problems and the dungeon is bland. In fact, of all the dungeons in the series so far, this is probably the one that felt the least original to me, as it is an iconic location, but the scenario does nothing intriguing with it. Especially when compared directly to the two predecessors, a drop can be detected – Part IV had a stellar temple/wilderness, part V an EXCELLENT dungeon – this one has a good temple. Don’t get me wrong, this is not a bad module, but seeing the lack of embedding and originality, I’ll settle for a final verdict of 3 stars – ok, but nothing too awesome, especially for the series.

Splinters of Faith 6 Pathfinder Edition is available from: