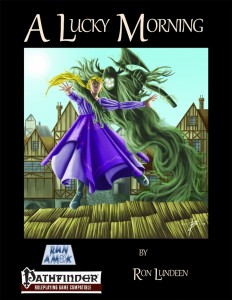 This being an adventure-review, the following contains SPOILERS. Potential players should definitely jump to the conclusion.

All right, still here? Not all adventuring groups are radiant heroes. Some are simply greedy bullies – not downright evil overlord-level nasties, but unpleasant people nonetheless. This certainly holds true for “Whistler’s Troupe.” The group consists of the following persons: Griffo, a nasty halfling bard. Robin Sackville, a skilled and regimented archer- Perin Sharpshadow, a shifty ranger/rogue urban killer, Gorin Half-Tusk, a half-orc barbarian just as violent as one would expect. Dandoli, a half-elven craven of an expert/sorceror. These guys have since become respectable…or as close to that as they’ll ever get. However, they have made an enemy – raised in orcish slave pits, the ugly dwarven necromancer Nudd never knew friendship, until he met these guys. Alas, that was a cruel jest on part of the troupe and they soon scorned him – the pain this caused, I can empathize with; the conclusion drawn from that by the necromancer…not so much. Nudd has vowed vengeance and now is the time for the troupe to reap the seeds of the hate they have sown.

Enter the PCs. They awake terribly hungover in the Bronze Unicorn…and find the people of the inn slaughtered – a mysterious note proclaims the inn to be closed, the bodies providing further clues to pursue – yes, this module is pretty much an investigation, but one wherein the PCs hopefully realize from the get-go that the cards are stacked against them – after the massacre, they are more than prime suspects… Following the investigation from the clues gathered, the trail of potential thieves guild involvement may seem promising – but in the end, it only leads to yet anotehr dead body…though one that may help the PCs discern a pattern. (It should also be noted that magical research is taken into account – the Dm is not left alone with the PC capacities and neither is this investigation linear in any way.)

Another pair of bodies may lead to an undine seer who provides the expected, cryptic clues and sooner or later, the Grinning Viper is on the PC’s list – here, a crucial clue (also rendered as a handout!) awaits and even the most stumped of groups will be prompted into action by defending the tavern from waves of zombies. Now whether they have screwed up, remained at the unicorn or the like – sooner or later, an altercation, whether normal or hostile, with the city watch is also fully depicted. And yes, even being arrested is part of the options covered with their own read-aloud text – including ways to get out of prison, of course!

Just as the PCs become frustrated, a shaded market may provide a glimpse of their adversary, who is promptly saved by a powerful wraith…with class levels. let’s hope the PCs are smart enough to use the daylight powerlessness of the wraith against it… A damn exciting “puzzle” encounter. A classic explosive rune‘d messgae may provide a guideline towards the grand finale where the PCs can defend the final member of Whistler’s Troupe from her grisly fate.

The module also provides a short gazetteer of the city of Thaven (fully mapped, btw.), including a mephit familiar-feat, 3 campaign traits, a full settlement statblock and information galore. The module comes with scaling advice to level 1 and up to 4-5, a new magic item, a new spell, 2 pages of collated handouts and 5 pregens, including familiars etc.

Editing and formatting are top-notch, I noticed no significant glitches. layout adheres to Run Amok Games’ elegant no-frills printer-friendly b/w-2-column standard and the pdf provides ample cartography and original art in b/w, with an extra pdf providing battle-map-style full-color versions of the cartography – kudos! the pdf comes fully bookmarked for your convenience.

Ron Lundeen knows how to craft easy to run investigations – even inexperienced DMs or those requiring a lot of read-aloud text should be able to run this module without any difficulties. The ample second chances and DM options to provide hints/move the plot along even in spite of PC failure also makes this very easy to run and require not much troubleshooting. That being said, I wished the module had more pronounced consequences for failures on the PC’s part – as written, the investigation is pretty much easy mode regarding the non-combat challenges. that being said, PCs who think they can take everything in combat sans thinking may very well have a brutally rude awakening…in case the module’s body count wasn’t indication enough before that… After making this clear to the players, though, this makes for a GREAT “first” investigation – the plot is simple, the villain’s motivation simple, the clues ample…and in the hands of a capable DM, the story has just the right tinge of tragedy that makes a module have an emotional impact.

To cut a long ramble short – this is a cool module for a more than fair price, with neat cartography to boot. It is easy to run, well written, has interesting challenges – not much to complain here. this is an all-out fun offering and well worth 5 stars + seal of approval.

You can get this cool module here on OBS and here on d20pfsrd.com’s shop!
Endzeitgeist out.