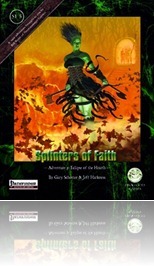 The fifth installment of the “Splinters of Faith”-series from Frog God Games is 40 pages long, 1 page front cover, 1 page editorial, 1 page ToC, 1 page SRD, leaving a whopping 36 pages of content, so let’s check it out!

This being an adventure review, the following contains SPOILERS. Potential players might wish to jump to the conclusion. Still here? All right!

After the last adventure delivered perhaps one of the most iconic temples I’ve ever read about in a module, this installment will have a tough standing – This time, we’ll visit the desert and Ardten’s Ziggurat. In contrast to other installments of the “Splinters of Faith”-series, this one depicts 2 versions of the same temple: The first section is devoted to a description of Ardten’s temple at its prime, while the adventure reflects the conquered and defiled status-quo hundreds of years later.

Ardten’s temple is set in the Kanderi desert, a desolate wasteland and thus the first part of the adventure is devoted to exploration of the desert and actually finding the temple. This part is accompanied by a map that suffers from the same problem as all the installments of the series with extensive wilderness exploration – no map for PCs (with hexes, squares, whatever) is provided, necessitating drawing work on part of the DM and making this section harder to run than it ought to be. This is especially a pity as Seraph, the temple-ziggurat of Ardten and its surroundings e.g. feature challenges like minotaur-vampires. The aspect that this part of the saga takes place in the desert, is, apart from minor heat-inconveniences (see heat dangers…) not really utilized – some unique hazards or complications would have made the wilderness-section truly astounding. After being rather disappointed on a high level by the desert, I started reading yet another Ziggurat/Pyramid in the desert and got ready to yawn.

My expectations were utterly subverted. From a dirty crystalline sphere to catch and project light into the heart of the temple to the forces that have taken it (Gnolls, Flinds and Seth-creatures), their individual skills and the traps, this is one stellar dungeon. Seriously, I’ve seldom seen such an aptly-presented complex in this few pages. Care for an example? There are corridors, where the walls are plastered with writhing snakes (really snake zombies) that have been nailed to the walls! Better yet: This serves a purpose! There is also a huge flesh-hewn wall of eyes and among the creatures left there, we get e.g. a golem with a poison-snake arm and a constrictor-tail arm! Acting smart provides benefits for the PCs in this crawl and they might even kill the new monster, a CR 7 Kamarupa-undead without a battle if they act clever. (This is good, as the creature can harass them during the exploration and has some rather deadly tricks up its sleeve…) Of all the temples in the series, this has been my favourite by far, with only one minor gripe on my side. Why are there no haunts/temporal anomalies? The temple is depicted in its former glory and adding haunts/visions/anomalies might drive home the extent of corruption, provide hints to the PCs, blind them to certain dangers etc. this adventure practically screams: Use this ploy and nothing of the like happens. A pity, as the dungeon could have become my undisputed favourite in the line.

Editing and formatting are top-notch, I didn’t notice any glitches. layout adheres to the 2-column standard and thankfully, this installment has bookmarks – great addition. The maps and b/w-artworks are neat, but I’m sorely missing a player’s map for the wilderness-section. This adventure, again, features no transition from the last, which starts to get a bit awkward – in order to reach the desert, the PCs have to cross a jungle, a mountain-range (featuring the temple of the installment 7…) and a range of desert. The information on the ancient temple of Ardten, while nice, is essentially useless for running the installment, as no haunts/temporal anomalies etc. are used. This does not sound good, I know. The adventure is essentially a prime candidate, even more so than its predecessors, for wasted potential: Gary Schotter and Jeff Harkness are stellar writers – their temples are cool, their fluff-text rocks – but the campaign as a whole feels somewhat disjointed, which becomes doubly apparent when reading the STELLAR dungeon. I can’t say this enough – the dungeon ROCKS. HARD. But where are the haunts? The anomalies? The visions? The icing on the cake is simply missing. Add the wilderness with its problems, the lack of spatial in-game connections, no player’s maps etc. make it very hard for me to unanimously recommend this installment, in spite of all the merits the pdf has to offer. My final verdict will thus be 3.5 stars, round up for the dungeon, round down if you want to use the good temple in the campaign. I personally round up to 4.

Splinters of Faith 5 Pathfinder Edition is available from: