So What's For Sale, Anyway? III 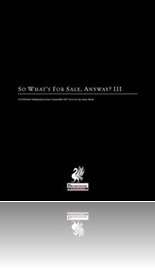 So, what do we get in this product? In contrast to the first two installments, this one focuses on what would be for sale in Dwarven settlements, lending a unique touch of culture/necessity to the respective items.

Additionally, sample towns are provided for your convenience in sideboxes. We get 25 lists for thorps, 3 cursed items for sale there and 2 sample thorps. 21 village-lists, 2 sample villages and 4 more curses are next and after that, 14 village-lists, 2 sample villages and 4 more cursed items appropriate for the size of the settlement. Small towns come with 6 curses, 2 sample towns and 11 lists, while their large brethren get 6 curses, 9 lists and one sample settlement. Small cities feature 8 potential curses, 1 sample town and 7 lists and finally, large cities get 7 lists, 8 curses and 1 sample settlement.

Astute readers may notice something: Metropolis-entries are missing. While I get that a dwarven metropolis would be a rare find indeed, I don’t get why not at least one was included in the deal – does that mean we won’t get entries for them in the upcoming elven, gnomish or halfling settlements either? If so, I have to say that I’m not a friend of the decision.

Editing and formatting are top-notch. The layout adheres to RSP’s 2-column standard and provides a lot of lists to make a GM’s life easier. The pdf is fully bookmarked and comes with an additional, especially printer-friendly version. I enjoy the option of 40 cursed items being included in the deal, but by now, I’m somehow not that excited about them – less would have probably been more. Curses take a lot of their excitement from being unique and less, but more mechanically complex curses would have been nice. I like the focus on “dwarven” weapons like crossbows, picks, hammers and axes and enjoyed the odd urgosh, but, honestly, I would have loved to see some more urgoshs, perhaps even a couple of meteor hammers or other weapons that would fit with dwarves. As written, the oomphteenth crossbow starts to get wearying. Add to that the lack of metropolis-entries for dwarves and I’m a bit disappointed in this installment. While the idea is good and this pdf is far from bad and in fact, a good buy, it could have been so much better. Thus, my final verdict will be 4 stars.

So What’s For Sale, Anyway? III is available from: