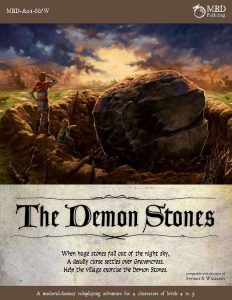 This massive module clocks in at 78 pages, 1 page front cover, 1 page editorial/author’s notes on making this, 1 page ToC, 2 pages of notes, 1 page of SRD, 2 pages MonkeyBlood Design glyph, 1 page occupied by a tentacle skull, 1 page back cover, leaving us with 68 pages of content, so let’s take a look!

Okay, first things first: This adventure is intended for 4 characters of 4th – 5th level, and it was the first big production of Glynn Seal’s MonkeyBlood Design, who handled everything but editing and cover illustration.

The module was playtested, credits its playtesters, and it shows. In many ways, I consider this to be the first big production by the company…and oh boy does it do things right that many others get wrong: The two pages of counters to represent the monsters and adversaries? They’re nice enough. However, where I seriously started drooling, was with the cartography: Not only do we get a LOT of it, we get player-friendly versions of everything. Yes, this includes not only the dungeons, but also lavishly-depicted roadside encounters! Fully mapped! Player-friendly! Heck yeah! Now, the village featured herein is the one exception – its map is the only one that comes only with a keyed version, but considering the module’s plot, I can kinda live with it, even though I don’t get why the pdf-version, which is layered, fyi, doesn’t at least feature that – don’t get me wrong: Having a version sans key would have been better, but at least it doesn’t spoil anything.

Speaking of which: There are two types of player-friendly maps: The ones that do the minimum (remove numbers and the like), and the ones that go one step beyond. This book features the latter. What do I mean by this? Well, not only are secret door “S”s excised, there are proper walls here, so if you’re using VTTs, or if you’re like me and cut up maps and hand them out, then this is AWESOME. Serious kudos for getting that right! Another aspect this gets right: I own the perfect-bound softcover version of the Pathfinder version of the book, and it properly spells the module’s name on the spine. It may be a small thing, but it’s something I appreciate.

Regarding themes, the module is billed as “medieval”, and it certainly fits that bill regarding its aesthetics and theme: The module does feature magic, but said magic is not commonplace or something everybody knows about; furthermore, while using fantastic tropes, these are always grounded. If you need a comparison, my best direct references would be Greyhawk’s grittier side, or Raging Swan Press’ offerings.

Rules-wise, we have an adherence to S&W (Swords & Wizardry) here, with ascending and descending AC noted, single saves, etc. Special bilities are properly called out, and traps are codified properly as well.

The adventure’s new monsters come with unique b/w-artworks, and the same holds true for the NPCs. Apart from important characters and the like, stats are placed throughout the module where they’re needed, which renders running this a pretty comfortable enterprise for the GM. In contrast to the PFRPG-version, we use the space that S&W’s compacter rules offer to present a whle page of stats for non-essential NPCS! Kudos for going the extra mile here. This is NOT one of those bad conversions we can see so often from 5e; this was done with obvious love for old-school aesthetics, and knowledge of the system. You won’t find references to skill check DCs or the like, and the adversaries have been properly adjusted. The module is harder in this iteration, due to PCs not being as strong, but that was to be expected.

Editing and formatting are very good on a formal and rules-language level; if you don’t know any better, you won’t realize that this is a conversion. Layout adheres to an elegant two-column b/w-standard, and the module sports A LOT of neat original b/w-artworks. The pdf version is layered, allowing you to customize it, and the module comes with a second, more printer-friendly iteration. The cartography is exemplary: Not only is there a lot of it, the player-friendly versions are super appreciated. Unlike the PFRPG-iteration, the OSR-version does have its full complement of bookmarks! This version also has another bonus: An easy-read iteration of the pdf. Cool! The pdf is PWYW! I am not even kidding!

Glynn Seal’s The Demon Stones” is a great adventure if you liked the gritty feel of old-school Greyhawk, if you gravitate more to the down-to-earth aesthetics of Raging Swan Press. While the module has high-fantasy-ish themes, it clothes them in a layer of plausibility, mystery and superstition that makes them feel appropriate for the overall atmosphere. The module manages to pull off not feeling like a conversion, and as a whole, is a resounding success.

The module achieves a high level of immersion throughout, with plenty of details and love evident. Now, I bought this module when its pdf was not yet PWYW, and I was thoroughly happy with it. If you’re just doing pdfs, I’d suggest something in the range of $5 – $6.99 for it. My final verdict for this adventure will be 5 stars – with my seal of approval added for the fair gesture of making the module PWYW. This is 100% owning.

You can get this adventure (INCLUDING PRINT) for PWYW here on OBS!