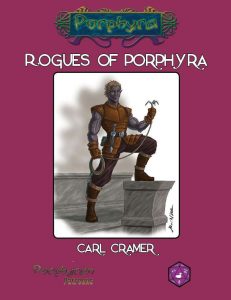 This installment of the player-facing „…of Porphyra“-series clocks in at 34 pages, 1 page front cover, 1 page editorial, 2 pages of SRD, leaving us with 30 pages of content – and yes, regular-sized pages!

This book is intended with both the classic and unchained rogue in mind, using brown text to denote content devised for the unchained rogue. The pdf begins by acknowledging the issues the rogue class has, and the ones that the unchained rogue class has. The author does offer some introductory advice for the player, and then begins to present basically fixes for the rogue and unchained rogue class, the first of which would be alternate key abilities, which allow the rogue to choose one of two key ability modifiers to govern their skills, thus reducing the inevitable multi-attribute-dependecy of the class. As an interesting idea, the pdf suggests modified the unchained rogue’s edge to grant virtual skill points in the edge’d skills, which don’t escalate numbers, but instead are taken into account as far as skill unlocks are concerned. I do like this notion. Superior retraining starting at end level and rogue talent replacement make sense. Sneak Attack has an alternative here as well, eliminating precision damage and instead choosing one of the base damage types of the attack for the bonus damage. I *assume* that this bonus damage still does not multiply, but clarification would have been nice. Interaction with defenses is properly codified, though.

The pdf does suggest a houserule I have been using for years: More skill points for everyone. +2 are suggested; and take it from me, the +2 skills per level will make your roleplaying experience beyond combat much cooler. Speaking of which: This also can be said about the plethora of skill uses codified within the pages of this book – for example, there is a means of analyzing traps, a means of using Disable Device to use demolitions to destroy objects instead of pure Strength, fire starting and extinguishing, making hurdles. Interesting would also be that the pdf champions of only rolling the best Perception check of the observers to counter Stealth. This greatly speeds up the game and is one rule I have been using myself, though I do myself use a variant, where concerted search efforts do accumulate benefits. The write-up does take into account the cases in which it’s important to know who’s observing. Speaking of Stealth: A compounded Stealth modifier table is pretty helpful, and as an optional rule, the unaware condition is suggested as a possible accelerator for faster playing.

There also is a cool section here for avoiding combats: Group and Marathon Stealth can both quicken the process in a nice manner. The pdf also sports no less than 9 cantrips/low-level spells (taking occult classes etc. into account) – these include a weak ray to push objects, conjuring forth ground mist, create a blind spot or tools. One of the spells is there to purge evidence and there is a lower level version of a short-range dimension door. Not the biggest fan of the latter, but that’s a matter of aesthetics. There are 7 new feats that allow for using alternate key ability modifiers, a follow-up for Spring Attack/Shot on the Run, and there is one interesting feats that lets you respond to a charge with an immediate action to retreat. Tower shield use via Pavises is also an interesting one. There also is one feat that lets you add Dex-mod to crossbow/firearm damage – and no, it doesn’t stack with other sources of Dex to damage or Str to damage – kudos and two thumbs up. There also is a Quick Sheathe feat.

The next section is one of the reasons you will want to seriously consider getting this supplement; it’s an example of honest design-work: The rogue talent section has a list of 1st party sources of rogue talents that are suitable for unchained rogues! The pdf goes further, though: It lists talents that should have their daily limits removed, advanced talents that are now available as regular talents and vigilante talents that should be available for rogues. This list is super-handy and keeps the class more relevant. Big kudos! A similar approach was btw. taken for advanced talents, and yes, if you have come to the same conclusions as I did with the progress of the game, then these are very much super-appreciated. The pdf also contains a ton of different rogue talents that offer further options that can become pretty ridiculously potent: Stealth Exploit, for example, lets you maintain Stealth after breaking it until the end of the round, allowing you to reestablish it. I’m super-torn on this one – on one hand, it makes infiltrations for specialists more reliable; on the other hand, a well-prepared group can use this to super-deadly effects and potentially cheese enemies really bad. That is not necessarily an issue of the talent, but rather one of the engine, but yeah. Still, as a whole, I thoroughly enjoyed this section, and depending on the system mastery levels of your game, this could well be a godsend of a section.

The pdf also contains no less than 10 different archetypes. The first of these would be the arcane adventurer, which is a hybrid of magus and rogue, though here, the sneak spell ability, which is intended to be the centerpiece of what makes this one unique, doesn’t properly work – it fails to designate how it actually works regarding spellcasting and “An arcane adventurer can use sneak spell on an outflanked target even if her spell is not a melee attack.” is just broken. The unchained rogue Brutal loses finesse training and gains a modified proficiency list and Combat Stamina. Solid tweak. Covins are basically mesmerist-versions of the hybrid-y magus/rogue chassis – and it, unfortunately, suffers from the same crucial issue. Everyday heroes get a vast skill list and a limited proficiency list. In a unique change of the engine, the everyday hero gets a scaling confidence pool that can be used to rerolls and skirmishing surges as well as special attacks, so called confident strikes – this pool is btw. easier to refill than even grit or panache, and the pdf does provide pretty extensive guidelines for replenishment. Instead of trapfinding, the everyday hero’s station, and confidence improves later. All in all, this is a well-made engine tweak with a distinct feeling.

Leeches gain good Fort-saves as well as Stalwart at higher levels; the archetype also gets a quite extensive array of unique talents that enhance further the already hastened mundane medicine that the archetype can apply. Using folk remedies to offset negative magical conditions etc. and using either super-quick surgery (or longer ones) for significant Con-damage regaining make this one interesting, particularly for games that make magical healing harder to come by. Mountebanks get a couple of investigator-y tricks and limited spellcasting, focusing on force effects etc. The saint of sinners is an interesting, complex fellow with a bit inquisitor thrown in. The archetype does gain a channel variant that deals damage to living and undead, and while it does note that constructs aren’t affected, the ability states that it’s a blend between positive and negative energy. This is super-problematic, as resistance and immunity interaction of the blended energy is not clear in the slightest, and many beings resistant to one component are also vulnerable to the other. Sneak channel, as a synergy ability, does actually work. The archetype also gains special abilities dubbed hoodoo, and makes for a potent, and interesting. The sapper is an interesting specialist/breach/pavise-user and is pretty neat. Solos are an interesting engine tweak – they sneak attack adjacent foes, but only if they’re not adjacent to any rogue ally. The final archetype is the most complex one – and it is this type of guy many guilds will want: Specialists: Instead of trap sense etc., you get to choose a rogue specialization, with changing later potentially possible.

Editing and formatting are very good on a formal level. On a rules-language level, the pdf is, for the most part, remarkably precise, top-tier even. It’s just a precious few instances where the integrity is compromised. Layout adheres to a two-column b/w-standard with purple and brown highlights, and the pdf does feature a couple of nice full-color artworks I haven’t seen before! The pdf comes with EXTENSIVE bookmarks for everything – feats, spells, talents…big kudos in the comfort department.

Carl Cramér’s Rogues of Porphyra is a surprisingly compelling grab bag for everyone that wants to see the rogue upped, power-wise, to the levels we’re seeing right now in PF’s lifecycle. The variant rules allow capable groups to cherry-pick aspects and implement them, and many of these are actually really inspiring, obviously tested and fun. It’s interesting to note that, even as late in the system’s lifecycle as this is, it still does offer novel approaches and some meaningful engine-tweaks. With the exception of a precious few blunders, this represents an excellent book. That being said, these few blunders, alas, do compromise the rules-integrity of a few aspects within, and as such, I can’t rate this as highly as I’d like to. Considering the amount of interesting options inside, though, I still do consider this to be a pdf bordering on very good. Hence, my final verdict will clock in at 4.5 stars, rounded up due to in dubio pro reo.

You can get this neat grab-bag here on OBS!