Quests of Doom: God of Ore 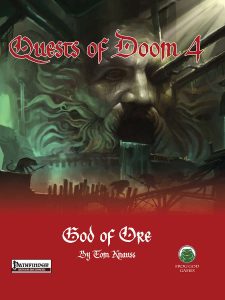 This review was requested by my patreon supporters, to be undertaken at my convenience – and I wouldn’t have reviewed this one usually. Why? Because the module is the first part of a series of adventures, which were first published in the criminally-underrated Mountains-sourcebook “Mountains of Madness.” Full disclosure: I was a backer of the KS to fund Mountains of Madness, since I genuinely consider the Perilous Vista books by Frog God Games to be some of their finest work for PFRPG. I briefly talked about the module back then, but my patreon supporters wanted a more detailed analysis of the module in question, so here we go!

“God of Ore” is a 3rd-level adventure, and as always, it assumes a well-balanced party; the module can be deadly, but it’s very much a module that can be won without losing PCs. Difficulty-wise, it is situated in the mid tier. The module is deeply steeped in the lore of the Lost lands-setting, and is situated in Stoneheart Valley; however, I found that using it in another setting is pretty simple – you just need a mountainous region that has this borderlands-frontier spirit. And yes, I use the “frontier”-term very consciously, for the adventure does manage to blend some Americana with the traditional fantasy themes.

The module begins in the frontier-town of Miners’ Refuge, and it is unfortunately here that I’ll have to field my first gripe against the adventure – you see, in Mountains of Madness, the village was fully depicted as a sample environment in its separate chapter, providing a sort of prologue environment; this section has been excised from this iteration here. As a consequence, there is less immediate motivation for the PCs. Oh, and as a rather embarrassing snafu, the epilogue does refer to this section – including the chapter header of the original Mountains of Madness-book. The module sports read-aloud text for most scenes. The scripted random encounters, which come with more details than usual, and even with read-aloud text, deserve special mention here.

All right, that being said, in order to go into more details, I’ll have to delve into SPOILERS. Potential players should jump ahead to the conclusion.

All right, only GMs around? Great! So, the module manages to evoke a kind of Gold Rush-vibe in the beginning, for when the PCs arrive in Miners’ Refuge, they’ll have missed an exodus of sorts. You see, Mithral Mountain is near – and it is notorious, for at one point, there was a dwarven clanshold here. This changed when one Clovis Stonesplitter struck the big one – or so it seemed. From the stone shards emerged what seemed like a vast vein of Mithral, and from the  ore, a creature emerged, the Dwer-Bokham, “dwarf of mithral” in the Dwarven Tongue. Clovis irrevocably changed, and began worshiping the strange entity, luring his fellow dwarves to his new deity. A revolution would follow, one only survived by the dwarves that fled, as the fanatics for the new deity took the hold. Multiple attempts to retake the hold failed, and as the corpses piled, the reputation of the place grew, and discouraged those foolish enough to venture there.

All of this changed with a lazy good-for-nothing dwarf named Bargus Farmud. Spoiled and arrogant, he had heard about the legend, but also didn’t want to risk his hide. A devious scheme grew. Bargus claimed that he had met the god of the Mithral Mountain, and that the deity had inscribed the secret to eternal happiness and immortality on a mithral tablet in the mountain, but also that he’d require someone pure and free of corruption to decipher the tablet.

Yeah, that got a huge chuckle out of me. the silver-tongued dwarf then proceeded to recruit the good folk of Miners’ refuge, leading them towards their doom. The PCs will follow the trail of the faithful up the mountain’s slopes, seeking to save them from themselves, and hopefully put the darkness to rest. The lower slopes of the mountain don’t speak of success – the PCs pretty much immediately come upon the survivors of a pretty bad ambush that caught the “pilgrims” unaware – and as such, the first section is all about dealing with the hobgoblins that ambushed the pilgrims. Interesting here: The survivors aren’t necessarily good people, nor are they evil clichés; they are more interesting than the usual “people to be saved” trope. Here, the PCs can also find hints that the pilgrimage’s leader managed to escape from the massacre – and that his ostensibly mithral-blessed mien was a hoax, a con.

A plus here would btw. be that the access to the dungeon is not linear – there are multiple ways to get inside, and considering the mithral-skinned infused dwarves waiting here, the PCs may wish to conserve their resources. The exploration of the fallen dwarfhold, now inhabited by the fanatic, mithral-skinned infused dwarves of Dwer-Bokham, si a pretty cool dungeon, particularly considering Bargus, for if the PCs are sloppy, they may actually buy into his at least plausible explanation for what transpired….provided they find him.

Dwer-Bokham is btw. a creature originally introduced in Mountains of Madness, a cobaltog. Guess what is missing, referring to Chapter 6 of Mountains of Madness? Bingo. The stats for the cobaltog. The frickin’ end-boss of the dungeon has no stats in the standalone module. This is just sad.

Editing and formatting are PER SE very good – as a part of Mountains of Madness. Unfortunately, the pdf, time and again, references that book, and is missing some information you actually NEED TO RUN THE MODULE. That is a no-go. Layout adheres to Frog God Games’ two-column b/w-standard with nice, original artworks, and the pdf comes fully bookmarked for your convenience. The module features quite a lot of nice b/w-cartography, but, in a seriously puzzling decision, the player-friendly maps included in Mountains of Madness are missing from the pdf! I get that a print module might need to be economical, but there is no reason for why this shouldn’t at least have the player-friendly maps for the pdf-version.

Tom Knauss’ God of Ore deserved so much better.

You see, I really enjoyed the adventure in its first iteration, but this here? This is a sloppy, minimum-effort stand-alone version of the module, a cut-copy-paste mess gone horribly wrong. Beyond having less features than it should, it actually lacks material that exists and has no reason to be absent here… and its BOSS IS MISSING.

The module would have lost some appeal sans the context and prologue sections, but not enough to sink it; God of Ore is, per se, a great little yarn I really enjoyed.

But it deserved better than this rushed stand-alone version, and is unbecoming of the standards we expect from Frog God Games. 2 stars. Get the excellent Mountains of Madness hardcover. But steer clear of this mess.

I only own the PFRPG-version of this module, but it is available in different versions:

The 5e-iteration can be found here!