Quests of Doom: A Little Knowledge 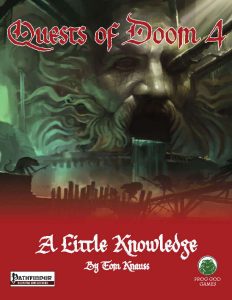 This review was requested by my patreon supporters, to be undertaken at my convenience – and I wouldn’t have reviewed this one usually. Why? Because the module is the second part of a series of adventures, which were first published in the criminally-underrated Mountains-sourcebook “Mountains of Madness.” Full disclosure: I was a backer of the KS to fund Mountains of Madness, since I genuinely consider the Perilous Vista books by Frog God Games to be some of their finest work for PFRPG. I briefly talked about the module back then, but my patreon supporters wanted a more detailed analysis of the module in question, so here we go!

“A Little Knowledge” is the second of the Mountains of Madness-adventures, and is intended for 5th-level characters; as always for Frog God Games scenarios, it is highly suggested to face these with a well-rounded group. The module comes with read-aloud text for most keyed locales, but not for every encounter featured. The module is set in the Lost lands campaign-setting, and while it can be divorced relatively easily from this backdrop, it does lose some of its cross-referential background appeal – Slumbering Tsar and Sword of Air both tangentially are relevant. The module takes place on the mountainous, fabled Feirgotha Plateau. Theme-wise, this module feels very much like old-school pulp in the best of ways, making me remember some of the rare good tales from Weird Tales.

The module does not really require other adventures from the Mountains of Madness set to work properly, making it a good stand-alone adventure in that regard. Anyhow, the module offers two different primary angles – one that has the PCs travel to the Plateau to search for the fabled Library of Arcady, lost dwarven poetry, and the other about the dwarven keep of Burvaadun, which might well be en route for the PCs.

All right, only GMs around? The module begins with the PCs needing to trek through the somewhat dilapidated dwarven mountain highways. A series of planned/random encounters happen here, and if anything, this is probably the part of the module that suffers most from being taken out of the big book: Mountains of Madness provides quite a lot of cool hazard/environmental rules for mountaineering, and the foreboding plateau and its highways lend themselves to applying those. Without this rules-chassis, the difficulty of the module decreases somewhat, as does its unique draw. That being said, the module does come with proper high altitude options and notes how to make the region environmentally challenging – it’s just that the module originally was pretty much a perfect place to apply all the fun stuff.

Anyhow, once the PCs manage to arrive at Burvaadun, they find the remote garrison under siege by undead, with the trail leading to the fabled remnants of Arcady. Which brings me to the pulp theme and its strength: Arcady was once part of the Khemitian culture; if you’re unfamiliar with it, to my knowledge, it was first featured in Gary Gygax’ Necropolis, and is essentially a quasi-Egyptian culture. Some of their arch-mages basically teleported an entire city atop the plateau, lending the proceedings a rather Shamballah-esque appeal. Suffice to say, the place fell, and dread Thanopsis still rules here – the mad mage has cheated death for millennia by consciousness-transference into younger bodies…but the process is starting to fail and wear on his mind. Worse, he failed to notice how a warm spell a few centuries ago had thawed his frozen body-array. (Yes, he is EVIL.) Worse, the xenophobic dwarves of Clan Craenog kept humans away – and his body is failing.

Hence, the ailing arch-wizard, his powers degrading in the body of a wizened crone, started throwing his undead against the dwarves, hoping to secure at least one human for consciousness-transference. The PCs will have to travel to the frozen ruins of lost Arcady and rid the world of the ailing evil of Thanopsis for once and for all. While I wished we got a bit more than the pyramid-topped fabled library to explore in the frozen city, the dungeon per se is nice: It makes sense regarding its denizens, manages to include a bit of social interaction (with pipefoxes), and generally sports a concise and well-crafted atmosphere that lets its ancient sense of dilapidation properly breathe; it manages to feel like exploring an ancient ruin, unnaturally kept in existence by a presence that should have died ages ago. The atmosphere here is, in short, well-executed., and traps make in-game sense, which is another plus.

Editing and formatting are very good on a formal and rules-language level. Layout adheres to the series’ two-column b/w-standard, and the module sports a nice b/w-artwork. The pdf-version comes fully bookmarked, and I can’t comment on the print version, since I only own the Mountains of Madness book in print. Cartography is a bit of a bummer: The key-less, VTT-friendly player-maps from the big book have not been included, not even as an extra pdf or jpgs. BOO!

Tom Knauss’ “A Little Knowledge” is a very atmospheric little adventure. It is a little bit of an odd man out in the Mountains of Madness modules, in that it does not focus on something dwarf-related and uses the garrison as a backdrop; its strong pulp theme is executed well and subdued enough to not hit you over the head with it. If anything, the stand-alone version suffers only from two shortcomings in comparison: The Mountains of Madness rules made it more interesting on an environmental level, and the absence of player-friendly maps is puzzling. If in doubt, get the hardcover instead. That being said, unlike “God of Ore” it at least does reference the proper core rules, so it doesn’t have dead links in the rules. What remains here, is a good adventure that loses a bit of its flavor and appeal, but not much. My final verdict will be 4.5 stars, rounded down.

You can get this pulp adventure here on OBS!

While I only own the PFRPG-version, this also exists in two more iterations:

You can find the OSR-version here!