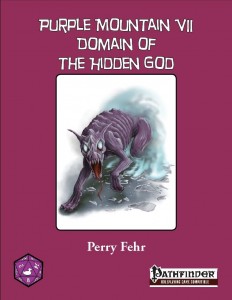 The 7th installment of Purple Duck Games series of glorious Purple Mountain modules clocks in at 37 pages, 1 page front cover, 1 page editorial, 1 page RSD, leaving us with 24 pages of content, so let’s take a look and check out whether the series can retain its track-record!

What is Purple Mountain, you ask? It’s one of the most underrated adventure-series currently available for pathfinder. A series of classic dungeon-modules, they are innovative, with each level sporting a unique concept and tight atmosphere. They also can be run as stand-alone modules and easily be inserted as dungeons of their own or as side-levels in other mega-dungeons. They also have consistently, for the last 5 issues, scored superb ratings from yours truly, so let’s take a look! This installment of the series is intended for 6th level characters.

But before we do…the following is an adventure module and as such, it contains SPOILERS. Potential players should jump to the conclusion.

All right, still here? There once was a CALL and a BEING followed it – it became something, a very incarnation of titanic artifice…and it plunged towards the patchwork world of Porphyra, heeding the calling. It allied with the elemental beings and was struck down by gods surpassing the power of the god being, smashed down and bereft of its servants and portfolio, it slumbers.

Enter the PCs. No, literally. This dungeon-level feels weird – gravity-reversals, strange pipes, daemons and clockwork adversaries – something odd is going on and as the PCs research the strange place, the realization might dawn on them – they are threading through the very body of the forgotten deity! Piecing the clues together is not necessarily a simple thing, with a sudden influx of madness accompanying the first utterance of the name of the fallen giant – alongside a limited wish.

The challenges awaiting include a trap of eternal glyphs that force the targets to develop a deadly obsession with them and suspiradaemons (rendered in GORGEOUS full-color art that cover one page) are deadly new adversaries. Have I mentioned the crystal dragon that serves as a dormant heart of the colossus, odd, drifting globes, different read-aloud texts for different vision-types for certain areas… yes, this is a massively cool dungeon.

Oh, and it comes with the very real possibility that the PCs awaken the nascent godling. While still inside him. Let’s just say that the PCs probably don’t want that, but honestly, this makes for a glorious campaign-changer, should you choose to pursue this storyline. Alternatively, simply ignoring the possibility of awakening eliminates all issues for the DM and further quarantine and preventing the awakening of the godling can spawn countless adventures.

The pdf comes with extensive statblocks for all creatures, including quite a few pretty awesome new ones, new magic items and spells, a full portfolio of the god, information on conducting soul trades, two religion-traits and massive tables that list XP and treasure by rooms, rendering that component of the module very easy to run.

Editing and formatting are good, though not perfect – I noticed quite a few typo-level glitches and similar small nuisances. Layout adheres to PDG’s printer-friendly two-column standard and the artworks deserve special mention – from gorgeous full page artworks to smaller ones, the full color art is truly beautiful. Cartography is functional and nice and comes with a player-friendly version of the map (yep – no secret doors – two thumbs up!) to cut out and hand out to the players.

Perry Fehr knows his adventures. This module had me grin from ear to ear. There is not a single boring encounter to be found in this dungeon and actually running the module turned out to be even cooler than anticipated – the challenges of the rooms in combination with the odd nature of the dungeon, the research etc. PLUS the challenging adversaries culminate in a module that perfectly breathes the spirit of old-school awesomeness and hearkens back to a time, where the truly wondrous could be found in the caverns and complexes below the world. Add to that the optional, massive ramifications of this module, which could be used to introduce technology, clockwork/dark tapestry-related material or e.g. ethermagic and similar uncommon magic organically into a given world, and we have a module that offers vast possibilities, but does not enforce them, thus allowing for maximum DM-control.

Now I won’t lie – editing is simply not up to perfection. There are quite a few glitches. There are instances of e.g. the text mentioning “missile attacks” when it ought to reference “ranged attacks” in general. There are problems like that in here that would have benefited from a further clean-up and were this a crunch-book, I’d complain much, much louder about these issues. It’s not. It’s a module. What I expect from a module are great stories, intriguing dungeons, cool monsters, deadly challenges, a concise atmosphere, etc. And in that regard, this pdf more than delivers.

What we have here is fun, uncommon, glorious and more daring in scope than MANY modules out there. While I can’t rate this a full five stars, I can rate it 4.5 stars, round it up and still slap my seal of approval on it. Why? Because I *loved* this module and its flair, because I will always value courage and innovation over blandness and mechanical perfection.