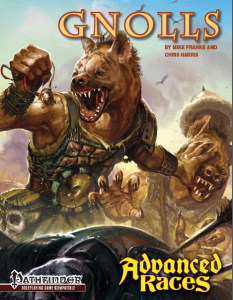 This installment of the Advanced Races-series clocks in at 17 pages, 1 page front cover, 1 page editorial/ToC, 1 page SRD and 1 page advertisement, leaving us with 13 pages of content, so let’s take a look!

We kick off this discussion on gnolls with an extensive text on the nature of gnoll society and psychology, steeped in Midgard-lore, yes, but also more setting-agnostic than many similar introductions – the writing here is pretty much top-notch and the new deity/mask of a deity Nkishi – which are particularly nasty, being allied to were-hyenas and bouda. What’s a bouda, you ask? well bouda are a new monster, a CR 5 div that is truly and utterly disgusting (and yes, here, that is a complement!) -with sickening smears, quick coup-de-graces and similar tricks, these creatures are pretty awesome and come with a pretty expensive flavor as well as a glorious artwork – I love them. Only…

Yeah, there’s a caveat here. I can’t, for the life of me, fathom why this cool creature is in a player’s book. It simply doesn’t belong here!

Gnolls as a playable race come with full-blown age, height and weight tables and receive the following benefits: +4 Str, -2 to all mental attributes. That gears them almost exclusively to physical pursuits AND enhances min-maxing. There’s a reason most races adhere to a net +2 gain, with one attribute bonus allocated to mental and one to physical attributes. The rationale of 3.X that valued Str higher than the other attributes is no longer in place as a design paradigm, so consider this decision leaving me puzzled. Gnolls also receive scent, proficiency with spears, crossbows and bows (!!!), darkvision and +10 ft movement when retreating. They also gain +1 Survival when scavenging for food and drink and receive a -2 penalty to saves versus fear-effects. Overall, this leaves the race very lopsided – great for rangers and martial characters, less useful for everyone else. On a design-perspective, this is exactly the racial “profiling” towards certain career paths one should usually avoid, especially considering the massive +4 Str-bonus. Do you even know how high you could go with that at first level? Yeah. Take a look at that damage output. Urgh. Add to that scent and martial weapon proficiencies…well, you get the idea. While not utterly overpowered or worthy of true ranting, I do not consider this an example of good racial design – it exhibits all flaws usually avoided.

A total of 4 alternate racial traits are presented, including slaver-style weapon proficiencies, better intimidation at the cost of an uneven penalty to fear-saves and gnolls particularly adept at sniveling. It should be noted that uneven bonus-types can be found quite often in here. One trait is even more min-maxy – 20 ft slow and steady movement instead of the default 30 ft, but also +2 Con for -4 to Int. Now if you can’t figure out how this can be easily gamed without even trying, I don’t know.

We receive 4 favored class options for cleric, ranger, druid and rogue, all of which are solid. Beyond these, we also get new archetypes, first of which would be the Mowa (cleric) – this archetype replaces spontaneous heal-conversion with different spontaneous spell conversions and also gets a focus on intimidation and 4+int skills per level. Additionally, they receive a curse at 3rd level that allows them to prevent targets from sleeping. As an Su. Not as an Sp, as an Su. They do not receive medium armor proficiency, but do receive alignment channel as a first level bonus feat. Sooo…more versatile conversion, an op curse that fails to specify the action it requires to activate…or a daily limit. Free feat at level one. For medium armor proficiency? Really? Where’s the balance here?

Silent Howlers are rangers of a specific secret society (with awesome fluff!) that cast spells via int from the sorc/wizard-list. Apart from that, they are locked into their first favored terrain, gain poison use, can move freely through crowds and perfectly blend and go undercover in masses. So here are the issues – so they cast sorc/wiz spells: With arcane spell failure or without? Also: Where’s the balance for receiving access to arguably the most powerful, versatile spell-list EVER? I like the concept, but poison use is better than endurance, sorc/wiz-spells are better than ranger spells and yes, the slight modifications of camouflage et al. are solid…but still, this archetype feels like it can use some clarification and gentle prodding with the nerf-bat.

The Wasteland Stalker ranger replaces spells with a unpenalized (level-wise) animal companion and is locked into the ranged specialization; The archetype also receives wasteland benefits. This one is…boring. There’s nothing cool here. Everything this archetype does can be done without it. It lacks a raison d’être.

The same can thankfully not be said about the new equipment provided: Posioned bolas, beetle carapace armor, musk bombs, fans to create dust clouds for ambushes and mewling horns – these items are interesting and compelling, though I would have preferred the beetle carapace as a material instead of being locked into an armor. The 5 new feats allow you to selectively ignore difficult terrain in certain terrain types,gaining a bite attack (properly codified!) or better Stealth in certain environments. On the problematic side – unlimited daily AoE-demoralization-howls need a nerfing – hrad. And, since they can be enhanced by allies, why not codify them as a teamwork feat? Also: A cap is very much required here – or at least a caveat that a creature can’t be affected again after being demoralized by the howl – some sort of balancing. The final feat allows you to become undetectable by tremorsense -which I applaud in theory – the sense needs some countermeasures. However, flat-out becoming undetectable is simply not smooth design – why not go for simply allowing a Stealth-check with a significant bonus?

A total of 9 magic items are also part of the deal, allowing gnolls to pose as humans and otherwise providing an interesting array of fetishes – all of which have at the very least iconic imagery going for them, some even sporting unique benefits – nice jobs, also since it gels well with the base concept.

Editing and formatting are very good – while the rules are not always perfect, no basic issues with the rules-language cropped up. Layout adheres to Kobold Press’ 2-column full-color standard and the pdf comes fully bookmarked. Artworks deserve special mention – they are GORGEOUS.

Mike Franke and Chris Harris deliver per se a book I’d recommend…were it a DM ecology. To be honest, this book felt pretty much like it had an identity-crisis: The inspired fluff, the savage magic items – all of it screams “I am a DM-book!” and this impression is further cemented by the inclusion of a cool monster. How many parties will tolerate a gnoll walking around with a fetish of elven ears? Yeah. Exactly. This confused focus, alas, extends to the crunch: While making a monster melee/caster-centric is valid practice, for a player race, it simply isn’t good design. And no, I’m not harping on this due to the power-level – lamia and shadow fey from the same series could be argued to be stronger. I’m harping on the whole built because it is a flat-out invitation to min-max certain builds, while others are simply inefficient when compared to regular races. Why *ever* go for a gnoll sorceror? Yeah.

This strange, confused identity is also reflected by another fact – unlike most AR-installments, the racial information is simply…not as extensive. Whether it’s traits, alternate racial traits, feats or archetypes, the book simply doesn’t offer that much and what’s here in these departments could either sue some fine-tuning, feels bland or both. Like it’s an after-thought, something to get over with so one can devote time to the cool spells, magic items, etc.

Or the write-up on a secret society that shouldn’t be in a player’s guide…much like aforementioned monster. Now don’t get me wrong, if the new racial material had some sort of synergy with the monster…a transformation of sorts…whatever…then I’d kind of understand it. Or as a companion. I’d get that. But like this? Weird indeed.

And then, there is simply what I’d call the “fluff-failure.” Know what the grand achievements of AR: Lamia and Shadow-Fey were? They managed to make races of arguably despicable individuals playable – by depicting the culture and its outcasts, the mentality. They opened NPC-races for players and did that without forcing the race towards a certain class or class-type. AR: Gnolls does no such thing. The gnolls herein are pretty much the almost universally despicable race we all know and love to kill. They are geared towards brutal savagery and their class options reflect that, one and all. If you take the secret-society ranger away, we get an OP xenophobic cleric and a bland ranger. The items, while awesome, also push them in that direction. The gnolls here don’t feel like a race I’d play – because this pdf leaves them pretty much one-dimensional.

Now this is especially baffling due to one thing: Kobold Press, and the Midgard Campaign Setting has done better. This is actually a huge step BACK for the depiction of the whole race. What do I mean?

Calm-Tongue. The great gnoll philosopher who developed a code of honor and understanding. Who subdued the bloodlust. Introduced in Midgard Legends and one of my favorite characters in the book, this guy is essentially a gnoll Mahatma Ghandi (with less pacifism and more serene ass-kicking). So you have this awesome lore established. You have this code and tradition…and then ignore it?! WHY? Even when remaining setting-agnostic, introducing the philosophy and expanding on it is such an incredibly obvious way of making gnolls more accepted, more player-friendly, I can’t fathom why this route wasn’t taken. In one fell swoop, this would add an extremely interesting, complex dichotomy to the race that would vastly enhance its appeal – both for players and DMs, who suddenly would receive more roleplaying potential than they could ever hope for. Instead we get brutish savages. *sigh*

Now don’t get me wrong. This pdf isn’t bad. It has its shining moments. They simply aren’t for players. Items, monster, fluff – mostly useful for the DM, including a simply savage and unpleasant deity that no non-evil PC will ever worship. All the player-content is, pardon my English, either design-wise too limited or bland.

How to rate this, then? For players, I’d suggest to steer clear – if you get this for balanced player’s options for gnolls, this fails and is a 2-star book – players are better off buying Midgard Legends for their DM and asking him/her to copy the legend of Calm-Tongue. As a source-book/equipment-option-array, it is nice though, and it does not sport enough issues to be thoroughly whacked. hence, my final verdict will clock in at 2.5 stars, barely rounded up to 3 – for DMs.

You can get this AR-installment here on OBS!