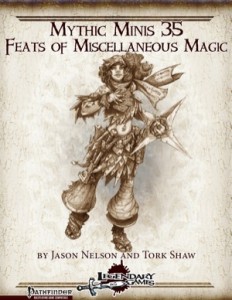 -Preferred Spell: Change preferred spell whenever you rest; spend spell level mythic power to cast the spell even if your spells run out. Okay, here we have a massive wording issue: As written, this feat could be read as “spend mythic power upon choosing the spell equal to spell level to cast it even when your slots run out”- which would mean infinite spells, which, even in mythic adventures, are just not cool. Not gonna happen anywhere near my game. Now I know that this feat *means* that one can spend x mythic power to cast the preferred spell ONCE, which makes sense, but as written, it could be read either way. Some slight rewording can get rid of this issue.

-Sacred Summons: Faster summons if they match your aura; any creatures you summon receive the benefits of a protection from…-spell. Also, for mythic power, double duration of summon that matches your alignment.

-Spell Hex: Replace spell selected with base feat with any spell of 2nd level or lower. Expend mythic power to change the spell. Nice versatility boost.

-Sunlight Summons: Creatures summoned shed daylight and blind foes on a crit if they fail their save. Again: Cool!

-Tenacious Transmutation: DC to dispel or remove your transmutation further increases; also: higher chance to bypass SR. Where this becomes really cool, though, is with the effect to retain some benefits from transmutations that were dispelled – damn cool!

Be sure to check the SRD-page for +2 feats:

-Theurgy: For arcane spells sacrificed, +CL-increase equal to spell-level sacrificed, up to a maximum of mythic tier. For divine spells + mythic tier x spell-level holy damage…which does not exist. There is no “holy” damage. EDIT: I’ve been made aware that the base feat has this error as well. I was already aware of that. This does not make this any less glitchy, just a reproduction of a glitch in the base feat.

-Uncanny Concentration: No need to make concentration checks while being grappled or entangled. Also, receive a bonus equal to +1/2 mythic tier to concentration and spend mythic power for +20 on concentration. Okay, flat-out immunity, plus vast bonuses to a roll seldom enhanced by anything + almost auto-win for mythic power? Yep, this feat is overpowered, even for mythic adventures, and needs a whack with the nerfbat.

Tork Shaw and Jason Nelson deliver a nice array of feats herein, with some true gems herein, but also some wording in need of filing off of the edges; And then there is the non-existing damage-type and utterly broken autowin-concentration-trickery in need of nerfing. My final verdict will clock in at 3.5 stars, rounded down to 3 for the purpose of this platform.