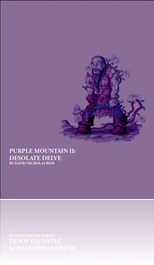 The second level of PDG’s old-school dungeon delve in the purple mountain from Purple Duck Games is 28 pages long, 1 page front cover, 1 page editorial, 4 pages SRD/advertisement, leaving 22 pages of content, including one page map, so let’s check this out!

Having jumped in the meat grinder/waste disposal shaft in the temple of the vermin lord and being received enthusiastically by a hungry, young otyugh, the PCs enter what once was a nice little Dwarven colony – unfortunately for the PCs, emphasis lies on the “was” – the colony was wiped by a twofold threat – an assault of yellow musk creepers and plant horrors like violet fungi and jinkins, a subtype of troublemaking gremlin.

Three sample hooks are given if you don’t plan on running Purple Mountain as a dungeon delving campaign (or if you do and want further enticement to lure the PCs deeper…) and two sample booby traps to spring on PCs as well as a random encounter table is provided for – and you’ll be using these, for the dungeon is presented as an organic sandbox, often providing guidelines for reactions of the respective faction to incursions like the setting of new traps and the like.

Due to the jinkin’s propensity for traps, rogues are going to have a lot to do on this level, as will rangers and druids, who’ll have an adversary in the leader of the plant monsters -a recently arrived troglodyte druid, who makes for one of the two bosses of the level, with the other one being the jinkin sorcerer who leads the little pests. It should also be noted that a nice d12-table for jinkin-cursed water is given as well as a total of 8 additional traps, not including aforementioned modular traps. Full stats for a fungal leshy, slurks, jinkins, the NPCs, the poltergeist and the blind undead dwarven Blindbraun that guards the broken lift are provided as well as a nice b/w-map of the level.

Have I mentioned e.g. a superheated door that should prove to be rather interesting?

Editing and formatting are very good, I didn’t notice any significant glitches while reading this pdf. Layout adheres to a printer-friendly two-column full-colour standard and provides some nice full-colour artworks of the NPCs and some monsters. The b/w-cartography is nice, though I would have liked a player-friendly version of the map sans traps etc. to cut up and hand out to the players as they go. The pdf comes with one bookmark only, which leads me to assume that something went wrong there. The pdf is also hyperlinked to the Grand OGL Wiki, if you’re using it on a laptop or tablet. Generally, I liked this exploration of the second level of the Purple Mountain – the locations are flavourful, the traps neat and mostly logical and the creatures make for a dynamic dungeon in the hands of a capable DM. However, Dms should be aware that without someone to find traps, there’ll be pain galore here for the PCs. The creatures and Npcs are unconventional, the design per se solid, and thus I’ll settle for a final verdict of 4 stars – a nice dungeon level that could be used as a stand-alone somewhat hampered by the fact that the two bosses are not too exciting and the fact that the bookmarks are messed up and that there’s no player-friendly map.

Purple Mountain II: Ruins of the Dwarven Delve is available from: