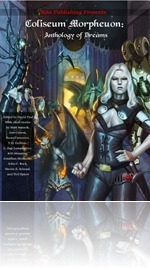 This being a fiction anthology from Rite Publishing, I’ll break the format of my usual reviews and instead try to provide a kind of teasers of this selection of short stories inspired by one of the best RPG-supplements of the last couple of generations. that being said, very minor SPOILERS abound.

Still here? All right! After an aptly-written introduction by editor David Paul, we dive right into the first short story: In Jonathan McAnulty’s “Living Legend”, we meet Tarl Dron – a hero, but also a man and as a man, he is wont to exaggerate: To impress women, to gain social status, to bask in admiration…but when he gets an introduction to the Coliseum to face his own accounts, will he live up to the legend he crafted?

In Tim Hitchcock’s “Focus”, we meet Ergasin, a champion, a bitter man once taken by the seers of Black Mountain, has once lost someone and memories may be among the worst foes ne can have – especially when in the Coliseum…

“The Sleeper Awakened”, by T.H. Gulliver, is perhaps the most abstract, far-out of the short stories. Taking the strange landscape of dream into full account, we meet a royal couple unwilling to live up to their destiny, a singing girl and a fate that is both cruel, poetic and hopeful – all in the fluidity and ephemeral creepiness of dreams, where fiction and reality not only blur, but become one and the same. I’ve said it time and again and I’ll repeat it here: T.H. Gulliver gets horror, gets creepiness and this is the final proof that he needs to write some kind of far-out mega-adventure!

Jess Carson’s “Full Circle” is more straight-forward – a team of individuals is after a trader of stolen dreams and apart from the uncommon protagonists and locations, this narrative is perhaps the one that could also happen in a regular setting with minor modifications. Nevertheless, an enjoyable read and after the dream-like awesomeness of the last short story, a more down-to-earth reading experience, though my least favourite one in the book.

In Rob Manning’s “With Intent”, we learn abound the denizens of dream, meet perhaps one of the most relatable protagonists herein and learn about the Denizens of Leng and their dread plots in the land of dream as well as about the political landscape around the Coliseum. This is also one of my favourite stories herein, thus no more spoilers on this one.

John C. “Valdemar the Mad” Rock provides us with a nice little story called “The Invitation” about the seductiveness of the Coliseum and how, among other things, good people may be tempted into joining the games of the Khan – should Vallah risk her life to grant her father another shot at glory, perhaps even a second life? And is he, is he, is anyone who they appear to be?

“Oneirobound”, by Matt Banach recounts a clever and woeful tale of one lost into dreams – among the stories herein, it is perhaps this one that has the clearest language and its conclusion is touching and serves as both a warning and a bleak outlook – the epilogue has one gulp.

In Ewan Cummings “Needlework”, we meet Bess, apprentice and sewer – but not only of cloth, but of corpses. Thrust into an intrigue in her guild and starting to get glimpses of the truth, will she be able to keep her precarious social standing and come out of the intrigues alive?

In Neil Spicer’s “The Dreams we keep”, Kanen, brilliant fighter and perhaps last of the Olosani is clinging to dreams of past happiness, addicted to them and has to face the facts of past, present and future, learn to trust and fight alongside an angelic ally and also brave two of the racial enemies of his kind – terrible, psychic vampires that feel alive, but certainly not mortal – will he prevail?

In Steven E. Schend’s “Threshold” an archmage has a heavy duty – returning to the Tarnished Souk after a long absence, a showdown awaits with his former protégé – here, he was taught the art of dream-theft and burning and thus, if one place may see the demise of the former apprentice’s dreams of grandeur and dominion, it is here, in an exciting showdown of battle, rhetoric and wits.

And finally, there is L. Jagi Lamplighter’s “Foot-sore Angel” – a disillusioned angel walks in trench-coat through a desolate dreamscape, igniting cigarettes with his flickering halo and seeking redemption. And as dreams border all worlds, not just fantasy worlds, a bit of dream bleeds over to our own world in this particular story. Of all the protagonists, this one is perhaps the most tragic one, but the story’s stellar humour and dark wit alleviates what could have easily become a gloom-fest. This vies with T.H. Gulliver’s contribution for my personal rank one – a touch of Dresden Files suffuses this one.

Editing is very good, though I noticed the odd typo here and there – generally, though, the anthology can be considered mostly free of glitches. Formatting adheres to and easy-to-read one-column standard and the overall quality of the narratives is good. While not all of them get the ephemeral, subtle wrongness inherent in dreams that I personally love about the Coliseum Morpheuon and its FoTS-series, I think that each of the stories herein adds a different facet, a different flavour to the mix and much like a well-rounded meal, each spice, each flavour adds to the overall recipe, resulting in a final experience that is larger than the sum of its parts. I’ve written it once and I’ll write it again: I’d definitely love a straight sequel to the Coliseum Morpheuon, perhaps other islands in the vast dreamlands and this anthology once again has me clamour for more. In the end, “Anthology of Dreams” is an enjoyable read that, much like dreams, ranges from joyful and almost nostalgic accounts of past and present events to formless nightmares where signifier and signified start to mix and lose cohesion to dump the reader into a vortex of emotional responses and associations. This book, at least for me, has been vastly more enjoyable than almost all stripes of other fantasy I’ve read in the last year – thus, my final verdict will clock in at 4.5 stars, rounded up to 5 due to being imaginative, full of awesome characters and variety as well as due to the low price of admission.

Coliseum Morpheuon: Anthology of Dreams is available from: