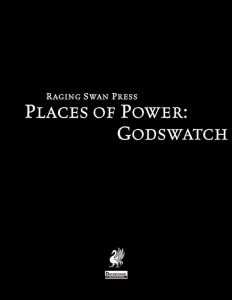 Consecrated in the names of countless gods, the edifice known as Godswatch represents a tower overlooking the raging river Kyrene, welcoming pilgrims and inquisitive priests of esoteric religions alike. It is more than a mere place of religious learning and sanctuary, though – the tower is also a watchpost, commemorating the triumph of the river god over an evil vanquished long ago.

No one permanently lives at the godswatch, but at least one elder and several acolytes staff the site and, as the lore that inquisitive PCs may pick up, suggests, the place may in itself be a safeguard against the return of the evil once defeated. As we’re come to expect from the series, the pdf does come with 6 sample events, which range from the arrival of new pilgrims to new shrines being consecrated, presenting means for the GM to kick off adventuring.

Similarly, we do receive the classic 6 whispers and rumours to provide further local color and mystery to this place. It should be noted that the nice b/w-map of the godswatch very much is limited to the tower itself – so no vicinity this time around, but on the plus-side, this actually makes inclusion of the tower exceedingly easy.

The sanctums of the tower, beyond the numerous shrines, are aligned according to the seasons, which also allows a GM to relatively easily tie the locale to the courts of the fey (and e.g. Kobold Press’ excellent fey-modules). Kyrene as a deity receives a solid, basic write-up and the pdf does feature a market-place that contains a variety of different items that can be purchased locally.

As befitting of a place very much defined by the flux of folks attending, a total of 4 fluff-centric NPC-write-ups are included for your convenience – all of these NPCs come with brief write-ups, including notes on mannerism, distinguishing features, etc. – and yes, these are nice.

Editing and formatting are very good, I noticed no serious glitches. Layout adheres to raging Swan Press’ elegant two-column b/w-standard and the pdf comes fully bookmarked for your convenience. The pdf comes in two versions, one optimized for screen-use and one optimized to be printed out. The cartography by Simon Butler and Dyson Logos is well-made and in b/w.

Amber Underwood’s Godswatch is a really cool concept and I generally like the tower and its themes; the place of power can easily be inserted into the game and may serve a surprising variety of functions. At the same place, it did leave me somewhat less satisfied in the PFRPG-version than other installments in the series – I kinda expected unique effects and wards, perhaps a locus or the like to mechanically represent the sacred power of the site, but did not get that herein. This is a good offering and an evocative locale that made me instantly come up with various ways to use it, but it still felt to me like it could have been even more awesome. Hence, my final verdict will clock in at 4 stars.