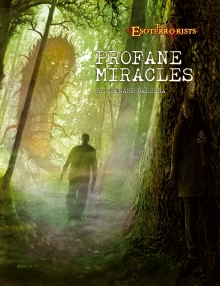 This adventure for Esoterrorists clocks in at 32 pages, 1 page front cover, 1 page editorial/ToC, 1 page blank, leaving us with 29 pages of content, so let’s take a look!

All right, still around? Great! So famous financier Jonathan Bentley was recently resurrected from beyond the pale in a rather public manner, at a charity ball of his widow Grace Summerville, and this feat was achieved by the famed psychic Cassandra Madrigal. The OV-agents are sent in with cover identities as investigative reporters. That’s the basic premise.

Behind the scenes, resentment has festered between Jonathan and his wife – she was smarter and always one step ahead, the true brains of his enormous success…and thus he faked his death with an esoterrorist drug named Fatalix, which also acts as a drug…if Bentley stops heeding the call of the esoterrorist Dellinger, he’ll withhold the drug. Bentley thus has fallen deeply into the control of the movement and the gambit of the esoterrorists (the medium is, obviously, a pawn as well) has paid off – Cassandra has retreated from business to live with her secretly loathsome husband, who has also, in his decadence, sired an illicit child – something that the investigators can find out…and the child is horrifically disfigured and can provide a hint regarding the involvement of the financier and his predicament.

The investigators will find a strange substance used by Cassandra during the ritual in the initial investigation of the big gala; it is this substance that will provide a clue. Cassandra, as mentioned before, is pretty much a well-meaning patsy and ultimately can point the investigators towards a street vendor of the occult and esoterrorist operative, one Vincent Marlowe, and point towards a large-scale order by Bentley financials – and yes, a nice chase may ensue here.

Blissfully unaware of the loathsome character of her husband returned from the dead, Grace can be convinced when faced with evidence (or smart investigators) provides access to the GPS-tracker and thus the PCs can track down Dellinger’s sanctuary. Here, an ODE, the dementia larvae and Marlowe prepare for a showdown, while Bentley lies comatose and a journal etc. fills in the undoubtedly at this point numerous blanks. There is still some crucial stuff to decide: There is an antidote, but it can either save Jonathan or his illicit child, not both… and there is still the matter at hand to stop Dellinger’s plans for a bigger ritual, on live TV – here, a series of obstacles provide some serious customization – and ultimately may boil down to another dangerous boss fight against an ODE created from a very strange Cassandra. The pdf does mention dealing with the two women harmed by the schemes here and the appendix depicting the dementia larva.

…did you notice something? Yeah, neither the actions of Bentley, nor those of Dellinger, make any sense whatsoever to me. I read the module multiple times and it’s REALLY, really hard to make heads or tails of them – hence the sudden, convenient journal-exposition dump. Worse, saving Jonathan suddenly makes him realize his love for Grace? SERIOUSLY? That bit had me frothing at the mouth. And this very public figure faked his death for a whole year, while indulging on sprees of decadence with drugs and hookers? Seriously, this module expects you to buy a lot of BS for a system that is based on logical investigation.

Editing and formatting are good, I noticed no glaring accumulations of glitches. Layout adheres to a b/w-two-column standard and the pdf sports really nice b/w-artwork and cartography. The pdf I have does not sport bookmarks, which constitutes a comfort detriment.

I am sorry, I really love Esoterrorists. But Leonard Balsera’s Profane Miracles is not a good module, to put it lightly. The motivations of the antagonists are jumbled, its shock-values are for shock only, the whole plan of the antagonists makes no sense whatsoever and the climax violates, to a degree, the summoning paradigms provided by the Summoning Guide. In short, the logic bugs herein not only extend to the meta-level, they can also be found on an in-game level. The exposition-dump that basically jams the whole story down the PC’s throats had folks groan at my table, complete with plenty of question marks above their heads. If you just want cheese-and-crackers-no-brains gameplay, this may do something for you…but why are you playing this investigative game then? If you want an actually good, action-packed Esoterrorist module, go for Six-Packed instead – it is much more rewarding and not such a structural mess. My final verdict will clock in at 2 stars.