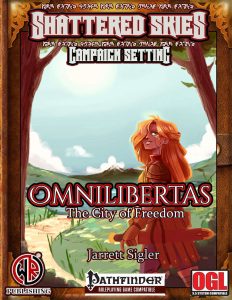 This supplement clocks in at 10 pages, 1 page front cover, 1 page editorial, 2 pages of SRD, 1 page back cover, leaving us with 5 pages of content, so let’s take a look!

The city of Omnilibertas (sometimes written as “OmniLibertas” or “OmniLiberatis” within, with no discernible reason for doing so – those two are just from the first column of text, mind you…) is the heart of the Republic of Unchained Helot, with the river Thadmuss neatly bisecting the city and acting as the central lifeblood of the place, bringing trade and new people to the place. The city, as its name implies, puts prime value of self-realization, fiercely celebrating individuality.

In a somewhat odd peculiarity regarding the prose, the quality is somewhat inconsistent and, in some paragraphs, becomes staccato-like. “The citizenry prepares for the Freedom games. The growing event brings people from all over the world within the borders of the city. The games change every four years. They are perhaps the only constant tradition with the city walls. That and the growing power of the prime minister.” Or: “The founding of OmniLiberatis was turbulent. Slaves seeking freedom found an old fortress. Tired, pursued, and scared. The hero Derrock Stockman led his people here.”

Now, don’t get me wrong – I don’t object to minimalist sentence structure, but the syntax is pretty repetitive and really hampers the reading flow in some instances.

This is particularly jarring, since it’s the only thing I can justifiably rate. Why? Well, while this is designated as a Pathfinder-product, it offers not even rudimentary information regarding the population, alignment or the like the city has. Its size is opaque and not defined – at all. We don’t get a settlement statblock. While there is a full-color map that would be nice, we get no player-friendly version, and colored overlays in various colors designate the different districts. However, we don’t know anything about how you become a citizen, the power brokers, etc. Even the system neutral versions of Village Backdrops released by Raging Swan Press offer infinitely more detail.

While citizenship seems to be something to aspire to, we get no idea how to actually gain this status, and this opaque nature really hampers, much to my chagrin, what would be an interesting place: Omnilibertas (or however this place is supposed to be called) notes unusual customs and laws that feature a rather libertine approach to morals and rules – and a direct opposition to the notion of ownership of other sentient beings can yield interesting consequences: Even children are not necessarily claimed as belonging to one couple, as that would imply ownership. The consequences and their development can make for compelling concepts to develop, particularly in a campaign setting, wherein morals are bound to be more conservative than in our world.

And indeed, with all the points of interest noted, the city offers quite a few intriguing places that makes it feel radically modern in many ways – even more modern than e.g. Andoran, and as such, there is a distinct feeling of a kind of Utopia to be found here, a notion only rarely explored in gaming. Interestingly, the points of interest do offer quite a few interesting glimpses into the city’s daily life. The issue, however, remains – while these tidbits are interesting, the city never really becomes alive, as its big frame, the stuff that is supposed to hold things together, that is supposed to contextualize this, simply is not there.

Editing and formatting are bad – considering that this is very much a system neutral book sans rules-language and the like to screw up, it’s a bit appalling to note the numerous glitches and inconsistencies in these few pages. Layout adheres to a two-column full-color standard that is aesthetically pleasing, and the pdf sports nice, original artworks. The pdf has no bookmarks. Annoyingly, you can’t copy text from the pdf. If you want to prepare excerpts for your players or just get rid of the ton of typos, you’ll need to copy the text by hand, typing it as you go. If you do, you’ll become even more cognizant of the bad editing and flaws in the flow of the prose. Cartography would be nice, but the color-shaded overlays mar what would have been an aesthetically-pleasing map. There is no player-friendly version provided.

Jarrett Sigler’s “Omnilibertas” is an exercise in frustration for me. I really love the idea of a utopian metropolis, and the idea underlying this is neat, but the execution is lackluster, and the absence of settlement stats can be excused for settlements in modules, but not for sourcebooks, no matter how brief they may be. This has to stand up to supplements like those by Raging Swan Press, and this woefully falls short of this level in every conceivable way. This does have a ton of potential, and with a picky editor, this, even in its current state, could have been a solid introduction to the metropolis. As written, it alas falls short of what it could have been, of what the idea deserved. My final verdict can’t exceed 2 stars.

You can get this conceptually-interesting city here on OBS!