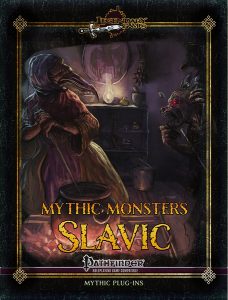 We begin this pdf in the most flavorful of ways – with a nice short story, a fairy tale if you will – the “Bear with Steel Fur”, a great little story that established the mood for the pdf…and could frankly yield quite a lot of inspiration in particularly for fans of Kobold Press’ Midgard or similarly more Slavic/Germanic environments. Thus, in the proper mindset, we are introduced to the diverse mythic creatures found within, beginning our journey with the mythic Bagiennik (CR 7/MR 3), whose nasal spray is upgraded to also allow for the dousing of those slain to return them back to life via the expenditure of mythic power…oh, and they can emit a cloud of total concealment-granting murk. Nice one!

At the lowest CR/MR-spectrum (CR 1/MR 1), the Etiainen is greatly expanded – while the nice artwork used previously for a unique creature in the series is a rehash, the critter more than makes up for this: You see, they may not only expend mythic power to assume Tiny or Large sizes, they also do not perish when fading, thwart detection and can stack its memory drain – making completely new angles possible. Great example of low-level mythic critter-design! On the other end of the CR-range, at a mighty CR 18/MR 7, the gorynych may emit a fascinating haze, its breath weapons are also modified in their cooldown mechanics and may be enhanced with mythic power, adding some serious tactics to breath weapon use. Oh, and know what’s worse? If you manage to slay this monstrosity, it discorporates in flame and death…and reassembles, hurt, but very much in fighting shape, with different defensive properties. Round 2 of the boss fight. NICE!

The famous domovoi at CR 4/MR 1 actually represents the spirit so much better with clean sweep – a telekinetic-style option to AoE clean/repair…and move foes. Add to that the option to assume the shape of a revered ancestor and we have a definite winner on our hands that feels truly magical. At one CR and MR more, the Dvorovoi similarly have been brought closer to the real world’s tales – they enhance the growth of nearby plants, but once their ire is roused, they can utterly ruin a farmer’s life with their magics and curse. At CR 3 and MR 1, the ovinnik would be another house spirit whose mythic upgrade receives unique tricks – namely a menacing bark to scare away intruders and fires started by them may warp the perception of creatures and allow for clairvoyance/audience tricks. I love all of these house spirits.

The CR 6/MR 2 kikimora receives a greatly empowered hidey hole that allows for some additional tactics; beyond that, they can enter the dreams of the sleeping, causing nightmares and also gaining bonuses versus those afflicted…and they can employ flaxen traps and spin it so quick, it can help them get away, making them a far deadlier adversary. Another classic that is often used would be the Rusalka, whose mythic version clocks in at CR 15/MR 6 and may maintain the beckoning call; beyond that, they can emit a shriek that can force others to attack a designated foe…and if you do not heed the ruslka’s call, you suffer. Their powers to enslave nonmythic creatures are horrid, they can attack with their tresses of hair and in water, they receive a serious defense upgrade, making them an appropriately formidable, dare I say “mythic” foe. Kudos indeed!

Compared to these guys, the CR 3/MR 1 upgrade of the tatzlwyrm is a bit less impressive – mythic power expenditure for conical poison or free action breath…okay, I guess, but not too exciting. At CR 8/MR 3, the air veela’s mythic version can draw the air forth from nearby creatures and gets a mythic power-based immediate action defensive power that ensures she does not go down quickly. The vodyanoi, at CR 6/MR 2, may summon water into the lungs of its victims and imprison the souls of its victims, drawing strength from them – this critter is basically an adventure plot in one statblock and a glorious representation of the creature’s mythological tropes. Two thumbs up!  At CR 4/MR 1m the vukodlak has a steal breath ability…which is unfortunately missing a part of its text and thus does not really work in a pretty glaring glitch.

The pdf also includes a new creature with a glorious full-color artwork would be the stalimedved – the eponymous, CR 21/MR 8 steely bears – gargantuan engines of destruction, whose flaming breath lingers; the creature can not only perform devastating physical attacks, its massive stomps can really wreck formations and structures. The quills are lethal as well and the sweeping claw attacks can hit multiple foes. All in all, a glorious, massive monstrosity.

Editing and formatting are top-notch, with the glaring exception of the cut-off steal breath ability. Layout adheres to Legendary Games’ two-column full-color standard and the pdf sports a blend of classic full-color artwork and the amazing new artwork for the stalimedved. The pdf comes fully bookmarked for your convenience.

Victoria Jaczko knocks this one right out of the stadium, if you want to engage in a Baseball-metaphor: The creatures herein and their respective upgrades represent amazing variations of the classic critters and bespeak a love for the mythology that inspired them – apart from the unfortunately cut off ability and the slightly less interesting tatzlwyrm, the pdf’s critters are absolutely amazing, rendering this a very worthwhile addition to the series. While not perfect, it represents an inspired collection of critters and thus, my final verdict will clock in at 5 stars, just short of my seal of approval.