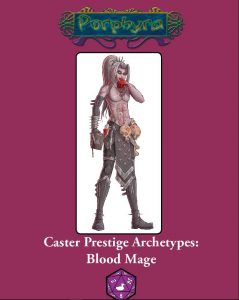 That out of the way, let us take a look at the first of these, the Bloodmage, who was built upon the Bloatmage PrC and the wizard-chassis. The class receives d6 HD, 2 + Int skills per level, proficiency with blowgun, crossbows (hand, light & heavy), dagger, spiked gauntlet, butterfly and switchblade knives and quadrens. The class gets a good Will-save and a 1/2 BAB-progression.  The class receives full spellcasting progression.  1/day at first level and an additional time at 7th level and every 4 levels thereafter, the bloodmage may ingest blood from a sorceror or a creature (sample creature and associated bloodline table provided), gaining temporary access. At 1st level, the bloodmage can access the bloodline powers of a bloodline thus absorbed, using Intelligence instead of Charisma as governing attribute, and familiar/companion-granting abilities temporarily morph the “special” familiar of the bloodmage. See below for that one. At 6th level, the bloodmage gains access o the bloodline spells and at 14th, to the bloodline arcane.

In order to cast spells from the bloodline, the bloodmage must expend blood points equal to the spell’s level. These points belong to the blood pool class feature, which is also gained at first level and equals half the bloodmage’s class level. These blood points replenish upon resting, but only up to this cap, not when it is exceeded. More on that later. The perceptive reader may have noted that I have not yet commented on action economy of blood draining, consumption, etc. – well, primarily, because I have not complaints – the pdf properly codifies all of that in a concise and precise manner. Kudos. And no, summoned creatures may not be tapped for blood.

One option to thus increase the blood point reservoir is to engage in a bloodsurge – this is a free action and at 1st level, the bloodmage can bloodsurge 1/day and gains 1 blood point from the surge. 4th level, 8th and 12th level as well as 20th level increase the daily uses of the blood surge. Starting at 4th level, you gain 1d4 blood points instead, with 8th upgrading that to 1d8 and 12th to 1d12. Minor formal and purely aesthetic complaint – it should be “1d12”, not “d12” in the example, analogue to the previous formatting. The bloodmage may drain himself in special rituals each day, which decreases the surge result by 1 at the cost of a -2 penalty to Con; Note that this is neither damage, nor drain! Why would you do that? Simple: If the blood point maximum exceeds 1/2 class level, the blood mage may suffer from the now somewhat unfortunately-named “Blood Rage” – note the blank space. I know the PRC predates the bloodrager…but yeah. If the maximum is exceeded, the bloodmage is sickened and if the bloodmage exceeds his class level in blood points, he enters a homicidal rage for 1d6 rounds or until blood points or HP are reduced to 0…and at the end of sucha  rage, the character loses all blood points, takes damage equal to his remaining hp and is staggered. OUCH.

Now I mentioned the mutating familiar…and indeed, this would be represented via the alchemist’s tumor familiar. Yes, this means that, with the right infusion, your sentient tumor detaches and morphs into the creature. Talk about messed up… 2nd level nets Spell Focus as a bonus feat and 3rd level nets the hemophilia drawback, which increases the DC to stop the bloodmage’s bleeding and decreases his blood points…which means that the drawback can be uses as a means to control blood points. 5th level yields the corpulence class feature, which nets the bloated bloodmage +1 caster level when casting Spell Focus spells, but also makes him be treated as udner constant medium load, with max Dex-bonus to AC locked at +3 and ACP -3 and the respective speed decrease. 10th level nets +1 natural armor, 17th level increases that to +2, but reduces speed further by 10 ft.

Now here things turn even more interesting – unlike in previous prestige archetype series, we now receive alternate base class builds:  The pdf covers multiple classes as alternate base chassis options and notes which class features are retained – these include arcanist, druid, psychic, sacerdote, sorceror and witch. This significantly increases the breadth of the class uses. Beyond that, the pdf also features a selection of diverse favored class options specifically for the bloodmage, covering, beyond the core races, also some of my favorite Porphyran races and appropriate candidates like the dhampir, who learns to heal himself via blood points.

Cool: The pdf comes with a bonus creature that has a gorgeous full-color artwork: The Cr 7 Abaasy, a kind of cyclops with a freezing gaze and a deadly iron lash. Nice critter, though I can’t comment on whether Perry Fehr or Mark Gedak wrote it, so I’ll tag both in my review.

Editing and formatting are very good, I noticed no glaring glitches and rules language is precise. Layout adheres to a 2-column full-color standard with PDG’s signature purple highlights and is pretty printer-friendly. Huge kudos: The pdf comes, in spite of its brevity, with full, nested bookmarks, making navigation extremely user-friendly!

Carl Cramér’s Bloodmage is very cool first installment for the series – from the general favored class options to the blood mage’s unique resource-management mechanic, the prestige archetype is rewarding, its ability dispersal makes sense and the rules-language is precise and well-crafted. In short: Apart from some example sentences sounding a bit wonky, there is nothing to complain about here. Well done and a great start for the series and leaves me without any serious complaints. This receives 5 stars, just short of my seal: The bloodsurge is cool and could carry more cool options. Still, a very promising start for the series!!

You can get this cool Caster Prestige Archetype here on OBS!