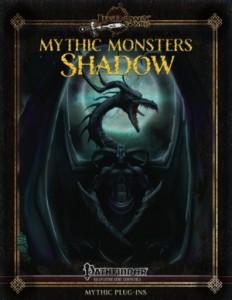 We begin, as always, this installment of Mythic Monsters with supplemental material – this time around, we get something rather uncommon, namely a complete mythic redesign of a prestige class, namely the shadowdancer. Now if you’ve been following my reviews, you’ll probably have noticed that I don’t have a particular high opinion of any of the basic PrCs from PFRPG’s basic setup – design-aesthetic-wise, they tend to be antiquated and subpar as options. As much as I like how the mythic shadowdancer provides a nice upgrade for the PrC, one that competently upgrades the class for mythic functionality, ultimately, I prefer the other shadow-themed options the various 3pps have graced us with so far…but still, this is ultimately unfair: The mythic shadowdancer here is solid, even though it misses the chance to make the PrC more unique.

All right, that out of the way, let us take a look at the main meat of this supplement, namely the monsters: We begin with the beautifully-illustrated CR 3/MR 1 Dark Creeper, whose mythic upgrade includes some truly cool tricks: Beyond being simple master poisoners, their very rags now contain a kind of smear poison that may truly cause targets to sicken. Where there are creepers, their stalker masters will not be far behind: At CR 5/MR 2, the Dark Stalker’s mythic version is an expert commander of dark creeper, providing bonuses to them and they may actually detach their very shadows as a kind of spying device and better yet, if one’s shadow is touched by that of the stalker, the victim will be more susceptible to the tricks of the stalker – smart, awesome visuals, love it! At the same CR/MR, gloomwings receive weakening pheromones, can overwhelm weakened minds and implant their lethal offspring into those unfortunates subject to their tender ministrations.

Obviously, in an installment focused on the masters of the dark, we also need to take a look at the wonderful Kytons: At CR 5/MR 2, the Lampadarius may expend mythic power to add potentially staggering cold damage to touch attacks and thanks to their defensive tricks and semi-corporeality, these guys are neat…oh, and yes, they come with a glorious artwork. The mythic sacristan, at CR 12/MR 5, can unleash AoE bull rushes and enhance their lethal shadow screams by expending mythic power to drag foes kicking and screaming into the plane of shadows…awesome. At CR 15/MR 6, the interlocutor may hijack constructs and undead via their skills and mark targets by virtue of their claws, forming a dread connection that makes them aware of weaknesses to exploit: All about control and savagery – like these guys! The Eremite, at CR 25/MR 10, would obviously be a bit of a different caliber: Beyond instant evisceration and grafting, these kytons can expend mythic power to alter their gaze attack to make victims attempting to inflict damage upon themselves as well as encroaching madness…oh, and speaking of which: As a response to attacks, these guys can teleport/shadow double AND negate the damage inflicted…Neat!

In similarly high strata, the CR 20/MR 8 Nightwalker receives obviously upgraded gazes that can be upgraded via mythic power and surge-die mechanics and even erode magical weapons, draining them away – indeed, the leitmotif here is lethal entropy – nice one! At CR 18/MR 7, the Primal Umbral Dragon’s standard build comes with the giant template applied, with the non-templated version being provided as well for your convenience. These dragons may literally swallow the light (and use mythic power to add vampiric shadow shield) and conjure forth swarms of winged, lethal shadows from their breath – glorious! Have I mentioned the more lethal gullet these dragons get? Yeah, damn cool!

While the ardent LG-fan may already know the gorgeous artwork provided for the CR 4/MR 1 mythic shadow, the eponymous undead’s light-dimming aura is indeed nice. The CR 10/MR 4 tenebrous worm can fire piercing bristles at adversaries and may use mythic power to make the lethal acid damage of their bites cling…and yes, they may fire strands of shadow stuff adversaries. At CR 6/MR 2, the umbral shepherd can expend mythic power to render a victim and all earthly possessions of the creature into shadow and use mythic power to further enhance its crits.

Finally, the pdf does provided a new creature with the CR 3/MR 2 shadowperson: Invisible when not seen out of the corner of one’s eyes, these creatures feed on fear, can use mythic power to enhance their fear-causing tricks and can possess victims…though they are banished by light. While concept-wise, this creature may not be particularly new, the execution of the shadowy stalker/possessor is admittedly excellent and inspired here – in fact, I think this one is closer to what shadows should be capable of doing in the first place.

Jason Nelson got Jeff Lee on board for this installment – a wise decision, considering that Jeff has written a rather awesome Dark Folk-supplement for Rogue Genius Games. And indeed, the duo’s builds herein are interesting, effective and exciting, with not a single build falling truly flat. While personally, I’m not the biggest fan of the shadow’s build when compared to similar low CR/MR-builds by Legendary Games and while the Shadowdancer’s mythic upgrade could have used a step beyond the simple upgrade of the PrC, ultimately, both of these complaints boil down to me being a spoiled bastard of a reviewer. In the end, this book is a great addition to the arsenal of a given GM and as such, this does receive a final verdict of 5 stars.

You can get this quality installment of the series here on OBS and here on d20pfsrd.com’s shop!
Endzeitgeist out.