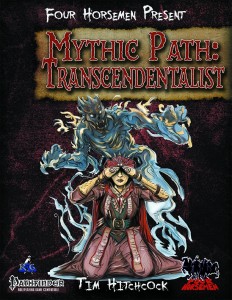 This installment of the Four Horsemen Present-series clocks in at 10 pages, 1 page front cover, 1 page SRD, 1/2 page editorial, leaving us with 7.5 pages of content, so let’s take a look!

Transcendentalism is generally known as a philosophical movement deeply rooted in American aesthetics, a kind of early intellectual counter-culture, ironically aimed versus the prominence of intellectualism and spiritualism in the 1820s and 30s, though its influence in literature and culture can still e felt to this day. Sporting a blend of Kant-influenced German Idealism blended with far Eastern, particularly Indian mysticism, the advocates of Transcendentalism can be considered to be closer to romanticism than empiricism, emphasizing subjective intuition over objective facts. Most importantly, to this date, Ralph Waldo Emerson involvement (to an extent) made the movement famous to this date, considering his influence to this date. Interesting in this regard is that he coined the most well known visual metaphor of the movement – the transparent eyeball, in his book Nature: I am a transparent eyeball – I am nothing and see all. To this date, the notion of transcending bodily limitations continues to exert influence and pop-culture has confabulated transcendentalism with the rather dark romanticism that was to follow – even though both Hawthorne and Poe, as two well-known authors, wrote rather scathing satires on the subject matter.

You don’t care about all of that, at all, right? Oh well – so, mechanics-wise, the transcendentalist as resented herein is a 10-tier full path that blends mechanics from both mythic adventures and occult adventures, focusing on usefulness for the more spellcast-y classes like psychic and mesmerist. They get 3 bonus hit points per tier. At 1st tier, a transcendentalist may select one of 3 evolved consciousness abilities: The first of these would be a kind of strong precognition, which allows you to expend mythic power as an immediate action to attempt a Ref-save to negate an incoming attack, with a DC based on 1/2 HD and attacker’s Dex – which is an interesting formula that works better here than a straight atk-based one would have. Nice. The second option, Psychic Boost, allows the transcendentalist to expend a swift action and a use of mythic power to cast a psychic spell or utilize a spell-like ability based on a psychic spell without expending its daily use at +1/2 tier caster level, minimum 1. Additionally, this allows for the limited application of metamagic modifications to the respective spell/SP. Thirdly, Psychic Surge allows you to, as a swift action, expend 1 use of mythic power to cast psychic spells sans expending the spell/spell-slot, even if you’ve already cast it, though spontaneous casters are restricted to spells known. If the spell features a saving throw, nonmythic foes will be penalized and should you be required to make a caster level check, you will receive a bonus and roll twice – but no free metamagic addition here.

Each tier provides a path ability, which are grouped along the classic 1st, 3rd and 6th-tier-distinction. The 10th tier capstone forces nonmythic creatures subject to psychic spells to roll saves twice and take the lesser result and lets you expend mythic power to automatically succeed caster level checks, providing a solid, if conservative logical evolution of the base themes of the path.

Now as for the respective path abilities, as you may have imagined, we get a wide array of them, both general ones feasible for multiple classes as well as path abilities that directly interact with class abilities of specific occult classes. Better binding, for example, would be one such component; +1 infusion another and multiple trick implants in allies would be a third. Automatically succeeding concentration checks of psychic spells that does not extend to the highest level you can cast would be a generalist, if very powerful option I’d personally nerf, but then again, I’m pretty much a bastard GM. Using mythic power in conjunction with spirit interaction would be another intriguing option presented in this pdf.

Kineticist fans also get their due, with elemental admixture and blasts via your gaze – the latter of which can have some hilarious Darkseid-style effects. Flashes of divination-based omniscience also complement the flavor of occult classes well and gaining stare-feats as bonus feats should make mesmerists happy. Similarly, using mythic power to negate damage dealt to the phantom is nice, but most interesting to me herein would be Occult Coupling: Whenever you use a standard action, move action, or swift action to activate an emotional focus, focus power, mesmerist trick, phrenic amplification or wild talent, you may also activate an ability that uses mythic power as a free action, expending the mythic power for that ability. The ability triggered must have the same action-cost (or less) as the one that triggered it. This is very interesting and allows for some unique, intriguing combos that will keep me occupied for some time. Speaking of interesting mechanics: Using mythic power to negate/diminish burn is interesting as well.

Among the 3rd tier powers, breaking a taboo accompanied by mythic power expenditure can keep you from suffering penalties and switching between ectoplasmic and incorporeal bonded manifestations similarly is a sound option. Similarly, extending a phantom’s ectoplasmic tether beyond the usual range is a fun option that makes sense in mythic contexts. An option to forego the requirement of an implement for spells from your implement school also makes sense. What about gaining immediate maximum information from divination spells adhering to certain criteria?

Among the 6th tier abilities, substituting mythic power for burn to gain metakinesis benefits is pretty awesome and unlimited shared consciousness is similarly an interesting game-changer. Very cool from a visual perspective: Enter a trance and use your kinetic blast to turn yourself into a bomb – touching you, hitting you – sets off a nasty explosion. Personally, I’m not a fan of mind-affecting spell-immunity, but since there’s precedence here, I’ll leave it at that. The pdf concludes with a seventh spirit boon that represents the mythic transcendentalist – and it’s pretty darn awesome, sporting both traditional psychic tricks and the representation of the problematic influence of maddening visions from beyond – pretty cool!

Editing and formatting generally are very good – rules-language-wise, there is surprisingly nothing to complain about, in spite of the interaction of complex occult and mythic systems – kudos! Strangely, this pdf once again offers the odd formatting glitch, where some abilities presented inside are bolded for no reason – not just their name. This could have been caught and represents a minor aesthetic gripe. Layout adheres to the full-color 2-column standard established for this series and the pdf comes bookmarked for your convenience.

Okay, this was a LOT of work. Occult Adventures, while one of my favorite hardcovers by Paizo, is complex and so is Mythic. Blending them…is even more complex. Doing so while maintaining thematic integrity of the material, particularly considering the need to cater to wildly diverse classes, is an even harder feat – an author Tim Hitchcock triumphantly succeeds in this endeavor. This is a refined, fun mythic path, in line with both the basic ones and the new ones introduced by Legendary Games, Kobold Press, etc. If this book has one flaw, that would be that I would have loved to see more: With the path necessarily catering towards different classes and abilities, I couldn’t shake the feeling that the transcendentalist can use more path abilities – I certainly hope to see more, particularly considering the impressive feat this pdf represents. My final verdict will hence clock in at 5 stars.

You can get this cool Occult/Mythic-crossover path here on OBS and here on d20pfsrd.com’s shop!
Endzeitgeist out.