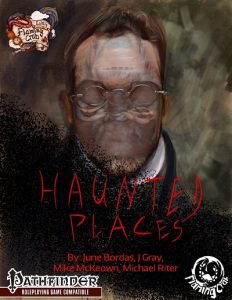 This installment of the Letters from the Flaming Crab-series clocks in at 12 pages, 1 page front cover, 1 page editorial, 2.5 pages of SRD, leaving us with 7.5 pages of content, though one of these would be the gorgeous cover in an un-swished-version – kudos for the great artwork there!

After the by now traditional letter from the planes-hopping ship Flaming Crab, we dive right in and begin with the chimney coffin (lavishly rendered in b/w!), providing a cool CR 6 suffocation-based haunt. Two thumbs up for this fellow!

Thereafter, we get a new spirit to channel for the Medium-class, the Child. You apply the spirit bonus to Bluff, Climb, Escape Artist, Perception and Stealth as well as Reflex-saves, which is, power-wise, in line with established spirits. As a seance boon, you get +1 to AC and favored locations would be orphanages, parks, playgrounds and schools, obviously. The influence penalty the spirit inflicts is equal to the spirit bonus as penalty to Int and Str based skill and ability checks, excluding Climb as well as attack rolls. Taboos include refusing to eat healthy food, taking any opportunity to play, an inability to stay up beyond bedtime, throwing tantrums and compulsory pranking -it’s your choice and, as a whole, I like them. The lesser ability increases the bonuses for being aided by your fellows, the intermediate nets you basically improved evasion by another name (and sans restrictions) and the greater effect lets you let the spirit gain 1 point of influence “to make an immediate save against any mind-affecting effect.” with a bonus equal to 1/2 your medium level. Okay, so “immediate” may not be the best wording here – it implies immediate action. Secondly, is the DC of the effect equal to the original DC? What about the few, but existing mind-influencing effects that do not allow for a save? Minor clarifications are in order here. As a supreme ability, this spirit offers a supernatural, component-less limited wish upon seeing the evening’s first star…which is cool, but since it is supernatural, the ability should state the action required for activation.

The shifter’s stone, a CR 6 boon loci, utilizes the myth of the norns and blends it with druidism, offering beast shape III as well as a great, general artwork. More interesting that that would be the fact that it comes with a second, corrupted CR 8 version that may transform you into harmless animals. This duality is well-executed here.

The Primal Spirit spiritualist archetype, who adds Handle Animal and Survival to the class skills instead of Bluff, also replacing the summon monster spells with summon nature’s allies. The primal aspect at 1st level can be activated as a swift action, gaining an animal aspect chosen from the hunter’s animal foci and while it is applied at full level, it does not also cover any companions and does not stack with the ability, though levels stack for purposes of foci’s power. Also at 1st level, the archetype receives the option to grow ghostly claws as a free action, dealing 1d4 per claw, 1d3 if Small. The ability does not specify them to be primary natural weapons, though I assume they are. 7th level nets Eldritch Claws and increases the damage die by one step, thus replacing etheric tether. 2nd level nets wild empathy and 3rd level at-will detect undead and 5th level provides a constant hide from undead. This replaces the 3rd level bonded manifestation. 4th level nets a +2 insight bonus to AC and all saves, increasing by +2 at 12th and 20th level, replacing spiritual interference and its greater brethren. 6th level nets Wild shape at -2 level, with 8th level unlocking air walk, 12th level providing an ectoplasmic creature’s phase lurch and 18th level the horrifying ooze ability. Elemental forms may not be assumed, but plant forms may. This, obviously, replaces spirit bond and its follow-up abilities. 13th level, finally, provides a secondary primal aspect.

The next haunt, once again lavishly rendered, would be the CR 4 stable of despair, which has some creepy imagery (think: Undead horse appearing and speaking to you…) indeed and the archetype here would be the rider of the undead paladin, who gains a skeletal mount, with touch of corruption powering simultaneous uses of channel energy and Command Undead. All in all, an okay archetype, but not one that blew me away.

The final haunt would be the unfinished painting (Anyone played Layers of Fear?), again at CR 4 – and it is the most complex of the haunts herein – arguably one that could power a whole low-level adventure. Similarly in line with this theme would be the mad painter mesmerist replaces consummate liar with +1/2 class level to all Artisan (painting) (???), Craft (painting) and Profession (painting) checks. That should *probably* be Performance…The mad painter can conjure forth a mystical brush with which he draws hypnotic patterns into thin air, either distracting or fascinating targets, usable 3 + Cha-mod times per day, with 7th level decreasing the activation action to move and 13th allowing for the activation as a swift action as well – this ability is known as mystic strokes. Interesting variant of hypnotic stare. To implant tricks, the painter has to draw on the recipient’s eyelids. At 1st level, the archetype ay expend spell slots to store spells in a given painting, making it a kind of “art”-bomb – the first subject within 20 ft. carefully examining the painting is affected, with -2 to the save. The painting can store spells for 1 hour per class level and can be enhanced with a password, allowing safe examination…and if that is not enough regarding great set-ups, I don’t know what is!

3rd level and every 4 levels thereafter, the mad painter may choose another “stroke of insanity” to modify his mystic strokes with – whether it’s affecting the mindless or instilling sluggishness in the targets, decreasing their movement rate. These modifications are all pretty cool and scale at 8th level. Starting at 6th level, the mad painter can use suggestions on targets affected by his strokes sans breaking the primary effect of the strokes-ability, an ability that increases to encompass the mass version of the spell, though that one was not italicized.

As a capstone, the mad painter can create paintings that kill a specific chosen creature looking at it. All in all, this is my favorite archetype by Flaming Crab Games so far – complex modifications, glorious theme, precise execution…and it is narrative gold, an adventure (or more) just waiting to happen.

Editing and formatting are good, though not perfect – I noticed a couple of minor hiccups. Layout adheres to Flaming Crab Games’ two-column full-color standard and the pdf features several gorgeous pieces of b/w-artwork as well as stunning full-color variations of the cover – all of which I really dug. The pdf comes fully bookmarked for your convenience.

June Bordas, J Gray, Mike McKeown and Michael Ritter provide a great little pdf here – while I wasn’t too impressed by the generally solid antipaladin archetype, the other material *did* impress me more than a bit; the mad painter, in particular, is a stroke of genius. … Sorry for that bad pun right there, I’ll hit myself later for it. Anyways, I really enjoyed the haunts as well – their descriptions are cool and evocative and they generally make sense.

While the pdf isn’t as refined as the installment on culinary magic and while I would have loved to see even more haunts, this still remains a great, fun little pdf for a more than fair price point, with the artworks provided for the haunts making cool micro-handouts (they are, alas, a bit small). Still, showing them to players can work rather well!

All in all, this is a good book, with some minor blemishes, but also some gems and thus receives a final verdict of 4.5 stars, rounded down to 4 for the purpose of this platform.