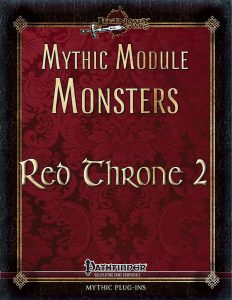 The second installment of the series of little pdfs providing mythic versions for the monsters originally featured in the bestiary sections of Curse of the Crimson Throne clocks in at 11 pages, 1 page front cover, 1 page editorial, 1 page SRD, leaving us with 8 pages, so let’s take a look!

The first creature herein would be the Leukodaemon at CR 11/MR 4, whose diseases become airborne (YES!) and his contagion is upgraded. Beyond mythic path abilities and their detachable skills and mere presence can make the area more infectious – amazing! If you already have the Mythic Monsters: Daemons-file, you’ll already be familiar with this guy, though.

At one CR less, the daughter of the dead gains Allied Spellcaster and may share teamwork feats with nearby divine spellcasters. Her ectoplasmic innards fortify her versus crits and precision damage and her shroud may conceal her from the living, granting a miss chance and the option to use mythic power-based haunting mists. Oh, and her claw may use a Cleave-variant! Cool upgrade!

At CR 1/MR 1, the giant fly’s upgrade immediately can infect foes that touch it and gains Dodge. At the same CR/MR, the giant maggot gains regeneration and may, upon being slain by anything other than fire, produce non-mythic maggots…and they may share spaces with other maggots. EW! Amazing!

This pdf also contains the herald Lawgiver, whose stats clock in at a mighty CR 18/MR 7. This guy gets the ability to form binding contracts and can share in bonuses…or suppress them via mythic power expenditure! Its golden body gains an upgrade as well, potentially blinding foes and reflecting attacks – defensive tricks that may be further upgraded via mythic power. Oh, and permanent truth-themes effects and 18th level inquisitor judgments. OUCH! Nice!

Finally, the pdf contains the mythic iteration of the nosferatu template, who gains grabbing claws that also inflict bleeding damage. They may overcome their weaknesses and squeeze through tight spots and, beyond higher rank channel resistance, they gain mistsight and obscuring mist and may later speak through those dominated. Flight and mistshapes as well as AoE-blood drain and the ability to use deeper darkness with a 1-mile radius, the higher level options are amazing. Glorious upgrade here!

Editing and formatting are top-notch, I noticed no issues. Layout adheres to a really elegant and nice two-column full-color standard and the pdf has no artworks or bookmarks, but needs none at this length.

Jason Nelson and Steven T. Helt of the four horsemen make for an amazing team – their design-paradigms are similar and they both really know their craft. This is an all-killer, no-filler pdf of amazing critters, well worth the fair asking price. My final verdict will clock in at 5 stars.