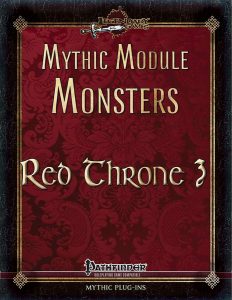 The third installment of the series of little pdfs providing mythic versions for the monsters originally featured in the bestiary sections of Curse of the Crimson Throne clocks in at 9 pages, 1 page front cover, 1 page editorial, 1 page SRD, leaving us with 6 pages, so let’s take a look!

This one has a bit of overlap with Mythic Monsters: India: The Upasunda Asura at CR 11/MR 4 and the amazing due of undead elephant (Rajput Ambari, CR 8/MR 3) and Rakshasa Maharaja (CR 25/MR 10) can all be found herein as well. The builds are all three amazing, but I have commented on all of them in my review of the big book.

The so far not covered creatures would be the house drake at CR 3/MR 1 gains Flyby Attack and treats his natural attacks as silver and also has the second save ability versus mind-affecting effects.

The second new creature herein would be the scarlet macaque swarm at CR 6/MR 2, who may filch items as a swift action, fling scarlet rage-inducing filth and flies into rages when faced with a bleeding target..oh, and being damaged can incite a combo of confusion and rage. Nasty! That being said, in a minor formatting glitch, a spell reference here has not been italicized.

Editing and formatting are very good, I noticed no significant issues. Layout adheres to a really elegant and nice two-column full-color standard and the pdf has no artworks or bookmarks, but needs none at this length.

Jason Nelson’s creatures herein are pretty damn amazing…but whether you should get them depends frankly on whether you have Mythic Monsters: India. If you do, this does not have that much new content, though what you do get, is amazing. If you’re willing to get this for the new critters, then you’ll probably enjoy this…otherwise, I’d suggest getting Mythic Monsters: India instead. Ultimately, my final verdict will hence clock in at 3.5 stars, rounded up due to in dubio pro reo.