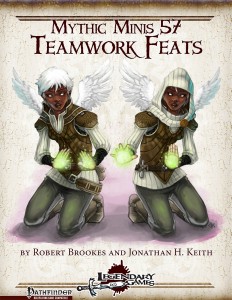 -Back to Back: Numerical escalation plus enemies provoke AoOs when flanking you when you’re with an ally who has this feat.

-Improved Back to Back: Better AC-bonus for each ally with the feat for 1 mythic power. Pretty weak, imho, despite its stacking potential.

-Cavalry Formation: Allows for overlap of squares of others for both rider and mount when charging. Also nets you a bonus when attacking a creature that was subjected to the charge of an ally with this feat. nice.

-Combat Medic: No AoO when using Heal while threatened, even if the aided creature does hnot have the feat. Also, use mythic power for more daily uses of treat deadly wounds. If the target also has the feat, you can treat them faster and at increased efficiency. Nice!

-Coordinated Charge: Charge with allies as an immediate action and move through ally squares and difficult terrain while doing so. For one mythic power, charge a foe who is twice your movement rate away from you.

-Enfilading Fire: +1/2 mythic tier to ranged attacks granted by Enfilading Fire. On a crit, expend mythic power for bonus damage based not only on your tier, but also that of your allies. Mechanically interesting one!

-Escape Route: Receive scaling AC bonuses when escaping through spaces or threatened areas of allies, with rank/tier as a cap. Alternatively, forfeit that bonus for better Acrobatics or overrun checks. Great – this increases the breadth of options significantly. Two thumbs up!

-Feint Partner: Extends flat-footed duration for one round, during which feinting is only a swift action.

-Improved Feint Partner: Provides AoOs as feint follow-ups, with damage bonus based on tier and static critical threat range that is easier to confirm.

-Seize the Moment: +tier damage, +1 threat range for the AoO, also better crit-confirming. A bit more overlap with improved feint partner than I would have liked, though it’s more general.

-Shake it Off: Bonus applies even if ally does not have this teamwork feat. Each ally with the feat provides a scaling bonus, which has a flexible cap based on 5 + tier. Nice.

On the SRD-page, there are 3 more feats:

-Tandem Trip: +1/2 tier to CMB to trip when tandem tripping; If the creature provokes an AoO from you, you geta bonus.

-Target of Opportunity: +1/2 tier to atk and damage. Bland.

-Team Pickpocketing: When you could Team Pickpocket, spend mythic power to Sleight of Hand and pickpocket EVERY CREATURE IN REACH. This is awesome! Simple, humble, cool.

Robert Brookes and Jonathan H. Keith deliver an interesting mythic mini here – one that oscillates between truly interesting and awesome and somewhat bland. Mind you, there is nothing bad in this little pdf, though some options arguably are weaker than others. On a design-aesthetic perspective, several feats utilize very interesting and mechanically feasible cap-mechanics and, moreover, there are some in here that are stars – they expand options in breadth and add much needed flexibility to some options herein. So yes, overall, his is a good file, bordering on the very good, but short of true brilliance with some feats herein that fall on the filler side. Hence, my final verdict will clock in at 4.5 stars, rounded down to 4 for the purpose of this platform.