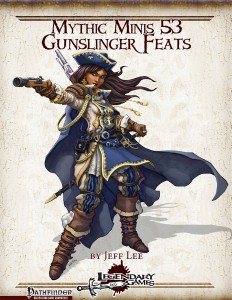 -Amateur Gunslinger: Gain Wis-mod grit, min 1 as well as a single 3rd level deed. Also use mythic power in lieu of grit to perform a deed. Can be traded for Mythic Extra Grit if getting the class feature.

-Extra Grit: +2 grit. Use mythic power whenever you regain grit to regain 2 grit instead. Cool mechanic!

-Snap Shot (found on the SRD-page, btw.): +2 AC when hitting a target with a ranged AoO; expend mythic power to make the bonus last for tier rounds. Alternatively, expend mythic power to temporarily gain Combat Reflexes for Ranged AoO-purposes or, if you have it already, increase number of AoOs per round by +1 per 3 tiers you have.

-Greater Snap Shot: Add +1/2 tier to damage and crit-confirmation rolls with your ranged AoOs and lets you use mythic power to auto-confirm a critical threat. I am NOT a fan of this latter option – why? Because firearms already deal terrible amounts of damage on crits and this further exacerbates the rocket launcher tag issue of mythic gameplay.

-Leaping Shot Deed: Further increase Acrobatics bonus. If you have the Quick Draw feat, you can drop a firearm as part of the full-round action and draw another, firing at a -2 penalized full attack bonus. For mythic power, you can end the shot on your feet instead of prone.

-No Name: Increases Bluff-checks with and without grit-expenditure. Also allows you to expend 1 grit to treat a disguise check as a natural 20.

-Ricochet Shot Deed: Ignore cover and concealment with ricochet shots; Spend 1 grit to render the target of such a shot flat-footed. That’s VERY strong; not sold on this one.

-Signature Deed: Reduce grit cost for the deed by 2. if the deed’s cost is 0, you can perform it for free as long as you have 1 grit as the deeds regular action. The feat also allows you to decrease the action it takes to perform the deed via mythic power – so far, so nice. Then, things get broken HARD – whenever you perform the deed, you regain 1 grit. I don’t have to tell you that this eliminates all limitations imposed on grit as a limited resource, right? Broken and needs nerfing.

-Sword and Pistol: Add +1 attack with pistol or crossbow when criting with a melee weapon. For one mythic power, you can double the threat range of the ranged weapon attack. Per se cool – two weapon fighting penalties apply. Got that. BUT: If you have executed 1 attack with your primary weapon and one with the off hand and score a crit on the second attack with the primary weapon, is the granted attack with the ranged off-hand weapon then executed at the usual penalty assigned to iterative attacks or at the full BAB? Since this is not an AoO, clarification is required here.

Jeff Lee’s gunslinger feats generally provide a fun array of options with some of them being capital letters-level fun. At the same time, several of the feats herein provide an unnecessary power-escalation in depth – something the mythic rules don’t need. Breadth provides a more compelling playing experience and as provided, several of the feats herein distinctly serve as exacerbating factors for some of the nastier components of mythic gameplay. Additionally, there are some minor problems in wording herein that need clarification and thus, I will settle on a final verdict of 2.5 stars, rounded up by a margin to 3 for the purpose of this platform.

You can get these feats here on OBS and here on d20pfsrd.com’s shop!
Endzeitgeist out.