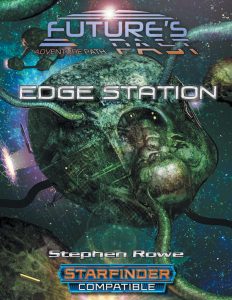 The first part of the Future’s Past AP clocks in at 22 pages, 1 page front cover, 1 page editorial/ToC, 1 page editorial, 1 page SRD, 1 page back cover, leaving us with 17 pages of content, so let’s take a look!

First things first: In a rather helpful notion, the pdf does feature icons to designate the type of NPC/monster faced with helpful glyphs – a neat plus. As often, the module works best for a well-rounded group, and as far as implicit setting is concerned, the module does assume the presence of a galactic coalition of some sort. This component is vague enough to make integration into the ongoing game simple – you can run this AP in pretty much any scifi-context.

This module begins with the PCs tasked to embark on a reconnaissance mission to the eponymous Edge Station, a facility studying rifts in space-time, deep in enemy territory, where the disturbing Druune exist, carrying a potent boon with them: Hybrid items called nodes, which contain a fraction of the potent Central Artificial Intelligence. Each node specializes in two skill checks, which the node enhances. The ship bringing the PCs to the setting of the adventure is fully statted as well. The adventure features read-aloud text for all keyed locales and key moments.

And this is far as I can explain what happens without going into SPOILERS. Potential players will want to skip ahead to the conclusion.

All right, only GMs around? Great! During the travel to Edge Station, the PCs experience strange phenomena like a closed loop, random ship system disassembly and the like – these establish tone and help the PCs get accustomed to their fellows, and research/information to be unearthed about the station is also presented…oh, and the Druune? They store information on a cellular level instead of in a central nervous system, are capable of rewriting DNA, and are practically immortal. They can infect targets for horrid consequences, and indeed, Druune infection, a disease with its own custom track, is a serious danger the PCs will encounter. But thankfully, Central AI is a potent ally: 1/round or 1/out of combat minute, the AI can give a PC perfectly-timed advice that allows for the reroll of a d20 roll. It’s just odd that sometimes, a weird déjà-vu event accompanies this whole thing – but then, that’s a great tool for the GM to show the PCs a brief vision of how they would have encountered catastrophic failure.

Anyhow, the approach to Edge Station can be as varied as gaming groups – from force to Disguising the ship to Stealth, there are quite a few cool means of entering Druune space. As an aside – the artworks within this book are stunning, depicting Druune-tech in an almost Giger-esque blending of tech and organic components that shows that they are beyond the Coalition – but their general scavengers and druune-enslaved footsoldiers should not prove to be too much of a hindrance for the PCs. Indeed, the one association you will have nonstop, is that of Dead Space’s Necromorphs – the artworks presented for the Druune-forces are as disturbing as they are inspired.

This is not to say that Edge Station is not one cool environment to explore, mind you: The station, you see, stretches across multiple dimensions, and as such, the PCs will be traversing multiple dimensional rifts, which can have a pretty wide variety of effects, with a table offering 10 different effects, all with meaningful mechanical consequences. Note that these are the effects of *traversing* the rifts – the respective labs make good use of this cool premise by employing a variety of planar traits and unique options to keep things fresh. It also bears mentioning that the station feels alive, in as much as going on High Alert will make things tougher for the PCs. Similarly, the complex does have cool traps that can be disabled via a variety of means, that have the proper EAC/KAC/HP-values, that can be destroyed and bypassed…neural nets and the like make for fitting obstacles, considering how smart the Druune actually are.

From the PC’s perspective, though, Edge Station will be a horror show; humanoids turned into oozes in the attempts of the Druune to elevate the, from their collective intelligence-perspective, horribly stupid humanoids, resulting in clones and the nightmare-fuel-style servants…this will work perfectly as a space-horror adventure. Add planar traits like subjective time to the fray, and we get one damn cool adventure….that can potentially end with a bang. The node realizes that the druune defied Central AI’s predictions – a prototype temporal consciousness teleportation device is in the facility. The node comments that it must deliver this data to Central AI. Then it states that there is a non-zero chance that the PCs are infected with druune-cells. It tells them that they cannot be allowed to leave and forbids investigation of the druune tech, issuing a final task, to destroy the prototype, before going dark.

The Central AI abandoned them. The PCs may be infected, slowly turning into Druune slaves. The node is initiating its self-destruct sequence…and they are stranded in a Druune facility. Now if that’s not an amazing cliffhanger, what is??

Editing and formatting are top-notch, I noticed no issues on a formal or rules-language level. Layout adheres to a really nice two-column full-color standard and the pdf sport a lot of absolutely amazing original full-color artwork. The pdf is fully bookmarked for your convenience. Cartography deserves special mention: The PC’s ship and the Druune ships they encounter are fully mapped in full color, and the complex they explore similarly comes with a neat full-color maps. Better yet, we get unlabeled, player-friendly versions of these maps, making the module really VTT-friendly and allowing for the use of maps as handouts et al.

Okay, I did not tell you, not even in the SPOILER-section, what made me cackle with glee. For the GM, who will get one crucial piece of information in the beginning, this module takes on a whole different dimension that makes it much smarter than it would seem from my above elaboration of its plot. From a player’s perspective, this is one utterly creepy, amazing dark scifi module that really drives home how alien the Druune are, how strange – it oozes Dead Space-y themes and atmosphere, condensing the best of said franchise down in a surprisingly efficient manner. In spite of the seeming brevity, this module has quite a lot of content to offer, and NEVER, not even once, presents a standard encounter or boring design-piece. Here, you can see why Stephen Rowe may well be one of the best designers currently working in the d20-realm: Beyond being a gifted author, he also is an exceedingly talented designer, and it shows here – the blending of mechanics and flavor is seamless, organic, perfect. This is as amazing an introductory scenario as you could expect from an AP and represents a phenomenal kick-off for the series. My final verdict will clock in at 5 stars + seal of approval, given sans hesitation.

You can get this inspired kick-off for a new campaign here on OBS!