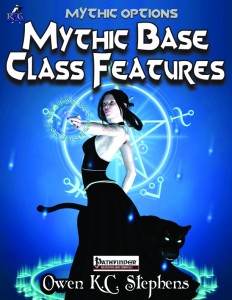 This installment of the Mythic Options-series clocks in at a massive 30 pages, 1 page front cover, 1 page editorial, 2 pages of SRD, 1 page of advertisement, leaving us with 26 pages of content – quite a bunch, so let’s take a look!

Mythic class features, as in the installment on core abilities, can be taken as 1st tier universal path abilities or in lieu of a mythic feat. In order to take such a class feature, the character needs to have its non-mythic iteration. Where the first such pdf covered the base classes, this one covers the classes introduced in the other, big Paizo hardcovers, not including the hybrid classes. Since, much like the first pdf, the class features are plentiful herein, I will not analyze them piece by piece, instead trying to give you a general overview.

Alchemists may substitute mythic power for extracts when using them, but only to prevent the expenditure or extracts with a casting duration of a standard action or below, but with increased CL and yes, even with the addition of metamagic, but only while adhering to pretty specific restrictions. A similar trick can apply to mythic bombs, hence providing a nice theme of resource-conversion. Mythic mutagens deserve special mention, because they are downright brilliant – 1/mutagen duration, the character may draw upon the power of the mutagen to execute one of 3 special, unique and downright brilliant moves that reflect the nigh-impossible surge, for additional melee attacks and even speed-blasted drive-by attacks – and this type of ability, with inspired, odd mechanics and new, wholly distinct options is what I love to see from such pdfs – much like the familiar-upgrade in the first pdf provided new options, this one changes how mutagens feel – which is neat. The discoveries generally adhere to a solid numerical escalation, with increased usability or the option to mix damage-types for bombs. Generally, the abilities provided here can be considered inspired indeed – but when e.g. +1 DC is the only effect of Mythic Poison use, I can’t help but ask who’d waste a path ability/mythic feat for the class feature…

The cavalier’s challenge nets him tier SR versus the target, which may be neat, but not too impressive. Mounts receive the upgrades by tier we’d expect for them and order abilities generally net additional uses or better action economy. All in all, the latter results in an interesting array of new options, especially when considering the 60 ft. upgraded reach of the tactician ability’s mythic version. Banner receives a similar upgrade in range, btw., and the capstoen supreme charge now is a flat-out save-or-die brute. A solid one.

Mythic gunslingers may utilize their new mythic tricks to repair guns on the fly and regain 1 point of grit whenever they expend a point of mythic power. Deeds receive a numerical escalation of some sorts (with e.g. deadeye ignoring the range-increment-penalties beyond the first, for a true sniping experience) or provide better transparency between mythic power and grit. The mythic inquisitor displays one of those “expand them yourself” abstract guidelines to provide versatile scaling for domain-abilities not covered in the book, akin to the formula utilized for sorceror bloodlines in the previous book – complex, but nice. That being said, unlike the unique inquisitions, the domain-specific tricks are taken from the cleric and as such feel a bit odd/not really fitting – and they have inherited the issue of e.g. duplicating the effects of mistsight in anything but the proper name. Extending judgments to allies via mythic power helps make them feel more viable (and imho would have served the base class pretty well!), while mythic bane now constantly applies – pretty powerful. Alas, while the editing of thsi one is better than that of the predecessor, there are glitches to be found herein as well – take mythic exploit weakness, which reads “When the inquisitor scores a critical hit against a creature, it’s [sic!] fast healing and regenerations top functioning…” – we can all glean what that ought to say, but it still had me chuckle a bit – hey, at least it’s a humorous double-typo!

The magus can receive spell-list expansion of a limited variety and increase the selection of special weapon abilities available via the arcane pool. Magus arcana are interesting in that they sport more than one way to gain a mythic upgrade – either, you can wildcard-instant-arcana retrain 1/day or provide numerical escalations for the arcana chosen. Especially interesting would be e.g. the options to deliver ray spells that target more targets in one touch attack – upon hitting, all effects are resolved versus the enemy at once – this may not sound like much, but some closer scrutiny should unveil without problems the significant increase in the glass-cannon-theme’s efficiency. In non-mythic games, I’d be screaming brimstone and hellfire by now, but in certain (though probably not all) mythic games, this will work pretty well. Just be careful when handing out spells that net a lot of rays… The tier-based scaling of anti-magic weapon special abilities provided by the mythic version of dispelling strike once again can be considered a nice one. That being said, mythic spell combat is pretty massive – “The magus can use a hand wielding a weapon to fulfill somatic components.” – this opens the way for all sword-and-board (mythic medium armor gets rid of arcane spell failure for shields) and dual-wielding types and the lack of restriction on melee/range means that even ranged magi are game. Now you are aware that I’m pretty much conservative when it comes to certain options, and the complete dissolution of most restrictions for spell combat opens the door wide for full-blown archer/caster-duality – and we all know that neither needed the increase in damage potential – so yeah, I’d be careful with this one. Same goes for allowing the magus access to wizard spells via the knowledge pool – that is INSANE. It’s the largest, most powerful spell-list available. Not gonna happen, not even in my mythic games. Odd – fighter training’s mythic version now allows the magus to count as 1/2 monk level for feat-prereq purposes – while I get the intent, there are not *that* many feats based on monk-levels as prereqs – most are based on feats and abilities.

Mythic oracles once again come with a massive and more than useful general guideline for the application of mysteries and revelations and generally, numerical escalations for the various revelations – upgrades from blindsense to blindsight, added tiers etc. – all in all, nice. A curse’s debilitating effects also get mitigated sooner, with the character level for the purposes of the curse being effectively enhanced by the tier – and the option to suspend the curse and its drawbacks temporarily by expenditure of mythic power. The mythic summoner may also select a limited assortment of spells from other classes and the eidolon can be enhanced to receive mythic abilities as well as the option to expend mythic power – the ability is based on the animal companion here, with a druid-remnant making that ample clear. Surprisingly, in spite of transpoistion allowing for the eidolon to remain a bit after a knockout, the mythic summoner feels like one of the most rounded of feature-suites herein, though temporarily granting allies evolution points opens a huge can of worms that perhaps should be carefully considered – and definitely prepared ahead of time to avoid grinding the game to a halt.

The witch’s cackle can now be executed by the familiar (not a big fan), but increasing the same to mythic would an option I’d consider must-have and long overdue. Once again, the witch can be considered, surprisingly, one of the suites I did not consider problematic. Now beyond these base-classes, Antipaladin, ninja and samurai are covered as well – the antipaladin being very interesting in that it is NOT a inverse paladin, instead receiving the option to choose one evil alignment per level, allowing the antipaladin to ignore the code of conduct as long as he retains the ethos of the alignment chosen. Permanent nondetection versus thought/alignment-reveals also should be considered a cool and overdue option. Spellcasting is also interesting – it provides a so-called “vile spell niche” – upon slaying a creature an antipaladin makes a character level check and may thus learn the spells of the creature slain – only temporarily, though. Pretty much inspired, that one. Ninjas receive mythic power/ki-point transparency and over all, can be considered nice (though there obviously is quite some overlap with the rogue) – I just wished mythic evasion had been slightly nerfed. Then again, using invisible blade to help adjacent allies vanish is pretty much one of the most iconic of ninja tricks – so yeah, over all, a cool suite. The mythic samurai may forego the order connection in favor of leadership/enhanced social prowess and status (and abilities). The numerical escalation for even more uses of resolve (+tier) feels excessive to me – the ability that boils essentially down to mettle did not need numerical escalation or even more uses -especially seeing how high-level samurai receive heal at full CL for 3 mythic power…ah, screw it, I like that they become very hard to kill indeed and samurai had the short end of the support stick for a long time!

Conclusion:
Editing and formatting are good, though not perfect – I noticed a couple of glitches, though less so than in the core mythic class ability-pdf. Layout adheres to a cleaner standard – the columns feel less jumbled than in older RGG-supplements and the pdf comes with a brownish background. The layout adheres to an otherwise pretty printer-friendly two-column standard with numerous stock-art pictures. The pdf comes fully bookmarked for your convenience.

Owen K.C. Stephen’s second take on mythic class features feels superior to the first book – mainly because it feels more refined – there are less obvious cut-copy-paste errors, less wonky bits…but most importantly, there simply are more interesting rules-choices herein. Perhaps it’s the sheer amount of mythic supplements I’ve reviewed, but numerical escalation, whether in normal or mythic contexts, bores me and exacerbates the issues the math sports at higher levels. This pdf does something smart more often than not, opting for unique, cool options in quite a few cases, where the mythic versions simply add a distinct, new and unique element to the game – when the pdf does this, I could hug it – mythic mutagens, for example, will become an instant staple in my games.

The issue at the root of this system, though, is one that this pdf does not address either – since all class features utilize the same basic resource, we have a broad discrepancy between the power granted and viability of the class features within the classes and across their borders – wasting the precious resource for +1 DC is just downright dumb, especially when literally all other class features provide at least a larger numerical bonus or even aforementioned unique options. So the issue remains – and with it, my basic assertion – this is a pdf I will use and introduce – but only as a tightly-controlled toolkit. Its design-options that grant access and help for the DM are a godsend (looking at the general rules-info for all mysteries/revelations and their mythic scaling, for example) showcase Owen’s massive capabilities, while at the same time the aforementioned resource-issue sticks out like a sore thumb and remains unresolved. The options provided are not balanced among themselves, with power varying wildly between the respective options provided.

So no, this will not land in my player’s hand sans modification/filtering, but at the same time, I consider it a blessing for mythic games and a step forward when compared to its direct predecessor. Hence, my final verdict will clock in at a slightly improved 3.5 stars, rounded up for the purposes of this platform to signify the increased oomph and creativity this mythic option-pdf displays.

You can get these class features here on OBS and here on d20pfsrd.com’s shop!