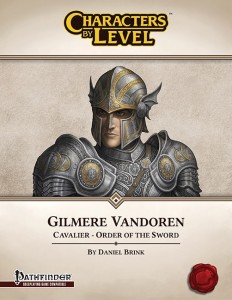 What do we get here – well, simple – a character, presented for each level from 1 – 20. But there are two suites of statblocks here – one for PCs and one for NPCs. NPC builds are based on 15 point buy or the NPC-heroic array, while PC-builds utilize the 20-point buy array plus 2 traits. A nice list of WBL for the builds is provided for each level. It should be noted that PC suggested WBLs have been lowered for characters in this series, allowing for GMs to add items/ utilize the characters in campaigns with less pronounced amounts of wealth/magic. Conversely, somewhat to my chagrin, mundane low cost equipment does not feature within the respective statblocks, which means you ultimately have to still look up those crucial pieces of mundane equipment, constituting a minor comfort detriment.

Gilmere, the character featured herein, has chosen the order of the sword and the emissary archetype and comes with a short background story as well as the beautiful high-res mugshot. Roleplaying advice, physical description, height and weight – all provided, including general explanations of the build. Gilmere focuses both on solid mounted combat and combat on foot, with the latter following the solid Power Attack/Overrun-based feat-tree. As a cavalier, he obviously also has a warhorse, Zeb, who is provided in the respective iterations for each of the statblocks.

Now conveniently, the pdf does not simply smash all the statblocks back to back into your face, but rather lists the progressions of feats chosen at the respective levels as well as the magic items gained and when they show up in the respective builds covered in an immensely handy list, while also providing an array of magic item suggestions for GM and players to ponder. Thereafter, we dive into the respective statblocks, which manage to cram all stats for the character in question as well as for the companion horse on one page, meaning you can simply print out the page you require.

Beyond the massive array of statblocks, the pdf comes with an archive that contains beyond high-res version of the respective mugshot also HeroLab-Portfolios and Portraits, Virtual Tabletop Tokens and Visual Aid/Wallpaper-versions of the graphics as well as the information required for licensing the material.

Editing and formatting are very good, crisp, clean and concise. Layout adheres to a 2-column full-color standard and the pdf comes fully bookmarked with nested bookmarks for your convenience. The original artwork is a high-quality piece and the supplemental material and guidance provided are nice.

Dan Brink’s first CBL is a nice file that can take a lot of pressure off a GM or player; the cavalier presented is passable in his efficiency and should fit into most gaming groups. Optimization-wise, there is some room, but this way, he is useable in more contexts. The supplemental information presented makes navigating this file easy and the overall, rewarding. However, there are some nitpicks I can field: Personally, I’d strongly suggest to provide a “Budget”-line for GMs that lists the discrepancy between GP used in the build and that suggested by WBL for each build to make shopping sprees to fill in the blanks quicker – yes, the number is just one quick calculation away, but still.

Secondly, the build itself, while at least archetyp’d, is simply not that complex or interesting – Gilmere is pretty much an quite efficient vanilla cavalier. If that’s what you’re looking for: Great. At the same time, the difficulty of creating this one isn’t that high, meaning that conversely, the time saved, while still significant, is somewhat less impressive than for different, more complex builds. But there is one more factor, and that one is very much in favor of this pdf: It’s ridiculously inexpensive for the work it takes to make a lvl 1 – 20-progression, much less two of them. Ultimately, these factors all conspire to make me consider this a good pdf, but not a perfect one. My final verdict will clock in at 4.5 stars, rounded down to 4 for the purpose of this platform.

You can get this collection of stats for less than 2 bucks here on OBS!

Do you want to support the product-line? The patreon can be found here!
Endzeitgeist out.