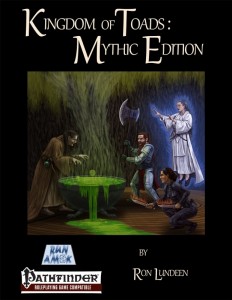 This massive high-level module is 64 pages long, 1 page front cover, 1 page editorial, 1 page ToC, 1 page SRD, leaving us with 60 pages of content, so let’s take a look, shall we?

Okay! Being written for level 17-18 characters with 7 – 8 mythic tiers, we can expect some epic reasons for adventuring – and here they are: 2 days ago, the schemes of the vile witch Vakelna came to fruition when she conducted a ritual to turn THE WHOLE POPULATION OF THE KINGDOM of Kelwyk into toads. The kingdom would be lost, were it not for one sloppy flaw in the ritual and the fortuitous fact that Iselin, the king’s advisor, was travelling the astral plane when the ritual was unleashed. Now, while he can’t locate the witch to reverse the epic hex, he does contact the PCs, for he knows where to start searching:

Some years ago, Vakelna was slain by the mythic dragon Arovarax and it is there they may reclaim her former body. Travelling there will prove to be no problem thanks to the PC’s massive resources, but the lair itself will not be a cake-walk – the dragon is worshipped by a ridiculously powerful guard of elite troglodytes. Fighting said menaces, the PCs can rescue a band of hapless adventurers – The Justiciars of Justice. Yes. The Paladin of the group ends every sentence with “and to vanquish evil!” and similar statements, providing comic relief (all too rarely seen in modules!) – powerful, but outclassed by both opposition and PCs, they should bring a few smiles to the faces of your players in a nice change of pace from testing their mettle versus mithril golems, tataka rakshasas and the CR 21/MR 7 advanced wyrm blue dragon Arovarax, who will use a combination of his mirage and breath weapon to deadly effect. The mythic expansions that have been applied to base module render the dragon a significantly increased threat, though I wished the foolish justicars had also been made mythic – it would explain how these numbnuts could survive…

Further complicating things, the kingdom of Stonevale, long-time rivals of Kelwyk, have no intention of letting the PCs save their rivals and thus have taken steps: The Thorn Company, the best adventuring party/agents the kingdom can muster, has been sent to take care of the PCs and end them: And end them they may – a high-level adventuring party striking from an ambush as a dynamic factor should challenge all but the best of groups to their limits – especially since the group has been upgraded to mythic status as well.

Solving the puzzle, the PCs can now travel into the Legacy Oak’s demiplane to challenge Vakelna – if they survive their way through the huge tree-dungeon, in which not only gigantic lice, sap demons (upgraded to mythic) and similar threats lurk. Worse, the tree’s “immune-system” is active and sards, terrifyingly powerful plant-creatures that have been rendered mythic, will seek to exterminate intruders as well. The PCs may also inadvertently unleash perhaps the most powerful pugwampi ever statted (who comes with a new feat a new magic item) – who not only seeks to trick the PCs, but also wants to claim Vakelna’s cauldron for himself – oh, and CR 20 + 8 mythic ranks = PAIN. Speaking of which:

3 young, agile, mythic linnorms guarding the entrance to the final fight should provide enough time for Vakelna to cast her impressive buff-list and generally prepare herself and her 6 CR 14 giant twigjack rogues for a memorable showdown. Reversing the transformation, the PCs are hailed as heroes and quite possibly, planar threats await just around the corner.

The pdf can be scaled down to level 15-16 or up to 19-20 via information provided herein and the second appendix collates the new feat, magic items and two new creatures (Gargantuan Bark Beetles, baby!) and the two maps are also provided in player-friendly b/w-version in an extra pdf. We also get 5 mythic pregens.

Editing and formatting are top-notch, I didn’t notice any significant glitches though there are minor hiccups here and there, with MR being consistently applied in the CR-lines. Layout adheres to a printer-friendly, elegant b/w-standard and the artworks provided are original and nice. The pdf comes with an extra file of untagged maps to print out and use as hand-outs – NICE! The pdf comes fully bookmarked for your convenience and aforementioned b/w-cartography provided is neat.

Author Ron Lundeen tries his hand at one epic high-level adventure breathing the spirit of broad repercussions appropriate for the level and manages to provide a module that challenges beyond its statblock-builds and also offers some food for the mind. Kingdom of Toads is a great adventure without the mythic rules and it works well with them as well. The builds are powerful and relatively cool and sport some unique tricks. So all’s well? Alas, no.

Running this module as a playtest, I couldn’t help but feel the serious sting of the limitations vanilla mythic rules provide – the one official hardcover just does not have that much fun material. Once you get used to Legendary Games’ massive additional tricks released, you have a different perspective – I’ve literally used so much of their material that vanilla mythic feels even more incomplete to me without the additional pdfs than it did when the original hardcover was released – so yes, my sincere recommendation to mythic GMs is to crank out those books and add more mythic spells etc. to the fray. But that, I won’t hold against this pdf. What I *do* hold against it is that the book’s adversaries fall into the trap of vanilla mythic rules simply not being that well-rounded – hence, especially at higher tiers, combats can fall on the rocket-launcher-tag side of things and the adversaries herein imho required means to offset and counter this syndrome.

Much like Wrath of the Righteous, this module also suffers from what I’d consider the lost-chance syndrome – mythic rules as such engender a particular playstyle of high action and over the top stunts. While this module properly upgrades the primary antagonists and elite adversaries, I couldn’t help but feel that the areas themselves, the hazards and distinctively unique environments in which this takes place, could have used some interaction with mythic rules: Use mythic power to enhance terrain, play with surges – the like. If one module was predisposed towards said type of shenanigans, it was this one. The absence of the like results in this not necessarily feeling like a “mythic high level module,” but rather like a high level module with mythic adversaries. Fun fact – I tested this module with non-mythic PCs and my players, with much dying, some luck and strategy managed to prevail, so if your group is as insane and challenge-craving as mine, this module does test non-mythic characters to their limits and probably, beyond. Conversely, mythic characters had not an easy time, but neither was the party eliminated – in direct comparison, the non-mythic module felt more lethal for non-mythic characters than the mythic module for mythic characters. But I’m rambling.

On its own, sans modification and for mythic groups, this is a good module; surprisingly, it is an excellent module for groups wherein the players crave a challenge and are willing to pit themselves against mythic foes without being mythic themselves. My final verdict, thus, would oscillate between 4 and 5 stars – since the target audience consists of the former, though, I’ll settle on 4 stars as an official verdict.

You can get this mythic module here on OBS and here on d20pfsrd.com’s shop!