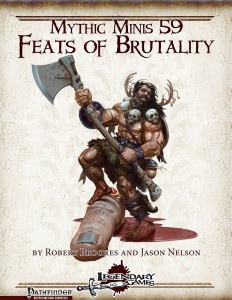 -Cleaving Finish: Adds second attack at -5 to the cleaving finish. Essentially an escalation.

-Close-Quarters Thrower: When you hit a foe with a thrown weapon while threatened, make a melee attack at a foe at your highest atk as a swift action. Solid for ninjas etc.

-Deadly Finish: When killing a target in melee or with ranged weapons, use clean blade path ability as a free action versus either a single foe within 30 ft. or all targets adjacent to the killed creature. Mythic power makes returning the creature from the dead more difficult. Damn cool idea of combining the path ability with the feat!

-Death or Glory: Automatically makes your attack used with this feat a threat if it hits. If the target is a mythic creature, its attack also automatically is a critical threat. If your target expends one mythic power, it can still make this retaliatory attack even if you kill or incapacitate it or if does not have an immediate action available. Per se cool, but what if the attack would be a critical threat anyways? As written, there’s no benefit, which is a kind of lost opportunity. It should be noted that this is a nitpick.

-Devastating Strike: Add damage to creatures adjacent to the target of your vital strikes, with fort to negate. On a nitpicky side, I would have preferred the mythic feat to spell out that the damage is bonus weapon damage, but that is a nitpick in a feat with AWESOME imagery. Love it!

-Improved Devastating Strike: Forego bonus damage in favor of 2 points of attribute damage to a physical attribute of your choice, with a fort-save to negate/halve, depending on whether the target is mythic or not. Cool: The Vital Strike feat-tree increases the damage caused. Nice synergy!

-Furious Finish: No longer be fatigued when using the feat to end your rage. Okay.

-Hammer the Gap: Knock back foes 5 foot for each successful, consecutive attack in a full attack. Non-mythic foes can also be knocked prone. I’m not a fan of the inability to resist the knock back, but I get why it works this way.

-Impaling Critical: When removing your weapon, foes take damage equal to the weapon’s base damage dice for mythic tier rounds. per se cool, but is that rolled or is it 1 point per die?

-Improved Impaling Critical: Add combat maneuver when criting a foe to immobilize the target – simple concept, hard to execute with rules and the rules-text gets it right -kudos!

-Raging Brutality: Double bonus damage on a critical hit. Use one mythic power when you activate Power Attack to double the damage bonus of Raging Brutality.

There are 3 more feats on the SRD-page:

-Raging Hurler: Add trip to hits with ranged thrown two-handed weapons. Not a fan of this. Hurlers already are nasty builds, even nastier with mythic tricks. Then again: Breadth over depth – so yeah, like it.

Robert Brookes and Jason Nelson deliver a solid array of mythic feats that feel visceral and deadly. While I am not a fan of the damage-escalation behind some feats, I very much enjoy the general design paradigm of adding versatility via these feats as opposed to just escalating damage/effects. From a design-perspective, I usually am not a fan of blending feats and path abilities, but here, the idea works rather well and organically. Ultimately, this is a good collection of mythic feats – well worth a final verdict of 4.5 stars, rounded down to 4 only because some feats herein felt a bit less awesome than others and sport some very minor ambiguities. However, since I *really* love some of the feats herein, I still award this my seal of approval.

You can get this brutal mythic mini here on OBS and here on d20pfsrd.com’s shop!