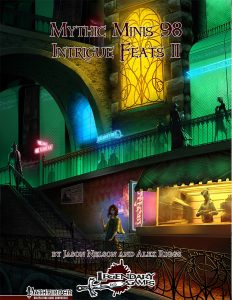 All right, you know the deal by now, right? 3 pages, 1 page front cover, 1 page SRD/editorial, 1 page content, so let’s go! Wait, one more thing – the SRD-page does contains two feats…don’t forget about them!

-Drunkard’s Recovery:  Gain surge die + Con mod hit points when dying and drinking alcohol and also gain polypurpose panacea and which benefit of it applies. As a standard action, you can expend mythic power to convey the benefits of the feat to another character while giving him alcohol. Additionally, you can use mythic power to make alcohol act as lesser restoration or make the cure spells you receive mythic. VERY cool expansion of the theme!

-Expeditious Sleuth: Reduce multiple of normal amount of time to take 20 by tier. Also enhances Perception when used in conjunction with mythic surges.

-Fox Insight: Add Int-mod to Wis-mod to Sense Motive to notice feints and demoralize attempts. As a swift action, you may expend mythic power to increase the demoralize/feint DC by tier. While it can be deduced, explicitly stating a duration for the mythic effect would have been nice here.

-Fox Trickery:  Use HD instead of BAB for the purpose of dirty tricks; also lets you use either Str or Int for the CMB of these maneuvers and if it’s not at least a +4 you gain from the attribute, the bonus is upgraded to this.

-Sabotaging Sunder: Use the feat as a standard action, even if you don’t have a free hand. If you do, you may use it in lieu of a melee attack and may even employ it in conjunction with charges, Spring Attack, etc. You may also AoO sunder with it and, as a full-round action execute up to 2 sunder maneuvers, 3 if you have 11+ ranks Disable Device, 4 if you have 16+ ranks. The iterative ones do receive penalties, though. Nice.

-Improved Sabotaging Sunder: You may sunder hidden objects, those inside bags, etc. and via mythic power expenditure, even those stored in extradimensional spaces. However, unless you can see inside the container, you affect a random chosen object inside it. Also nets you a Cleave-ish benefit to objects within a container. Damn cool!!

-Ranged Disable: Use it versus devices with cover or concealment, with the respective cover/concealment hampering you. For mythic power expenditure, you can affect complex devices.

-Sabotage Specialist: Allows you to precisely determine the timeframe after which a rigged device will fail, including whether that time needs to be in use, unused, etc. or based on an event and for mythic power, you can remote trigger it. AMAZING. Need. Want. Once again, a major house-rule/design scavenging-contender.

-Structural Strike: Still deal 1/2 precise strike damage when using it sans spending panache and attacking creatures otherwise immune to it. You may employ a swift action to spend mythic power and apply the full bonus versus otherwise immune creatures, sans needing the standard action cost or panache cost for 1 minute.

Editing and formatting are top-notch, I noticed no significant hiccups. Layout adheres to Legendary Games’ two column full-color standard and it features the artwork on the cover; that’s it – the one page content is solely devoted to crunch. Once again, some feats are underlined differently than others – purely cosmetic, though. The pdf has no bookmarks, but needs none at this length.

Alex Riggs and Jason Nelson’s collection of mythic feats herein is interesting and contains some serious gems. While there are a couple of less interesting ones herein, the gems do shine bright in this installment and make this useful beyond as simply an upgrade. My final verdict will hence clock in at 5 stars + seal of approval.