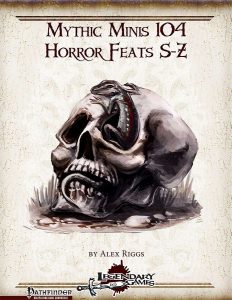 -Spawnlink: Passively observe what the spawn sees while maintaining your senses. You also don’t need to expend actions to retain the link while it’s established and aren’t blinded while looking through the spawn’s eyes, but take a penalty instead. Use mythic power to gaze through all spawns simultaneously. HECK YES. Undead overwatch. AMAZING.

-Spirit Speaker: Gain mythic tier to Diplomacy to get spirits absorbed to reveal intel. Spirits can be used to glean more information and mythic power to compel several answers, save to resist. Also, no longer take Wis-damage/sanity damage for using it. Really cool!

-Stubborn Curse: Increases Dc to remove curses; by expending 3 mythic power, you make it persistent and only removable by someone whose tier is equal to or greater than yours. Simple and neat!

-Touch of Evil: Gain a mythic tier based bonus to Sleight of Hand to prevent the touch being noticed. Nonmythic creatures only get a save upon being touched, while mythic creatures get both saves, but at a penalty to the second save. Also, the creature gains a bonus to mythic tier rolls in order to carry out the suggestion. Now this is one cool expansion of the feat!

-Twisted Love: Increase bonuses to +4 and, upon completion, learn automatically the nature of the effect resisted and, also after completion, use mythic power (amount depends on ½ spell level) to return the effect back to sender. Cool!

-Unyielding Ferocity: +4 Str and Con, -2 AC while under the effects of the feat. You also gain a single rage power you meet the prereqs for, + an additional one at 3rd, 6th and 9th tier. When reduced to 0 hp or below you can expend mythic power to gain access to one of these chosen rage powers. Really cool!

-Zealous Mind: When resisting a charm or compulsion from a chaotic source or one opposite your alignment of the good-evil-axis or when you get a secondary save, you gain a bonus to atk & damage versus the foe. When succeeding a save versus such an effect, you may use mythic power to render the target “staggered for dazed for 1 round”[sic!] – the “staggered for” here is redundant, for it should be 1 round dazed, 1d4+1 rounds staggered.

Editing and formatting are pretty good, I noticed no significant hiccups apart from the slightly confusing guffaw in the last feat. Layout adheres to Legendary Games’ two column full-color standard and it features the artwork on the cover; that’s it – the one page content is solely devoted to crunch. The pdf has no bookmarks, but needs none at this length.

Alex Riggs‘ final array of mythic horror feats is the inspired one I’ve been waiting for – pretty much every single feat has one brilliant, cool tactical option and blew me away. The only issue was in the final feat and it is what costs this my seal of approval. That being said, this is still inspired and excellent, well worth a final verdict of 5 stars.