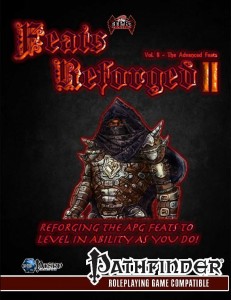 The second of TPK Games’ books on redesigns of feats that scale with the level is 39 pages long, 1 page front cover, 1 page SRD, 1 page editorial, leaving us with 36 pages of content, so let’s take a look, shall we?

This time, we get the feats reforged-treatment for all feats in the APG. So how do they scale? Most feats get their first upgrade at 7th level, the second at 14th, but that can in no way be claimed for all of them – one upgrade at 17th level (for feats that require 10th level), 13th and 20th level-upgrades…see the reasoning? Essentially, the feats upgrade in increments of 7 levels after the earliest level you could take the feat, which seems like a prudent guideline. Additional Traits, for example, nets you +1 trait at the respective increments, though you have to choose it from a category you don’t already have a trait in.

Usually, the feats have relatively straight progressions, like additional +1s, less penalty with Bloody Assault etc., but not all adhere to this formula – take the bodyguard feat – its first enhancement reduces the AC you have to hit to 8 (making it kind-of automatic sooner for non full BAB-classes like the monk) and the second upgrade increases AC granted to +3.

Special mention deserve usually rather useless feats à la cosmopolitan – their upgrade nets them a bonus to linguistics and later +1 language and even a 1/day reroll and makes them a much more valid, if not 100% optimal choice. Crossbow Mastery nets you an initiative bonus and an attack in the surprise round at -5 with crossbows, which also makes imho for some rather cool ideas regarding upgrades of a feat that in its base benefit is rather static. But, you know, I wouldn’t be me if I found nothing to complain about now, wouldn’t I? The good news here is – the following complaint is with the base feat, NOT exclusively with the reforged one – Deepsight has a prereq of Darkvision 60 ft. and extends it to 120 ft. – which is per se cool. However, there are beings with darkvision 90 ft. that, as written, can’t take the feat. And yes, that’s a blunder n Paizo’s part, not on the side of TPK Games, who stayed true to the base feat, but I still would have loved to see the Plus added that fixed the prereqs. That being said, ultranitpicks like this one of course will not influence the final verdict.

Disruptive Spell is also interesting, using a particular rule that is near and dear to my heart – degrees of failure. The disruptive effect lasts longer if the target botches the save by 5 or more. Which is definitely a plus. A downside, on the other hand, would be that broken feats that have inherited their non-scaling issues, missing the chance to be fixed.. Take Dreadful Carnage. Whenever you reduce an enemy below 0 HP, you get an AoE-demoralize as a free action. Fails the bag of kitten tests – carry around bag of kittens = unlimited demoralize AoEs. All right, at level 11 perhaps not the best strategy, but still, probably not how the feat was intended in either incarnation.

The Extra-feats take an interesting approach – instead of tying the benefit-upgrades to fixed levels, they net you a second discovery, hex etc. 10 levels after taking the feat. Where I can potentially see issues with certain builds would be the fast drinker-feat – at 7th level, it reduces the action required to imbibe alcohol down to a free action, thus opening the swift action slot. While MOST builds won’t benefit too strongly from this, some classes out there put quite a value on the swift action, so not 100% comfortable here. What’s damn awesome would be Groundling – taking a relatively lame base premise, its upgrades allow you to talk to earth elementals and all creatures with the earth-subtype. Quite cool! Also nice – the additional effects of improved stonecunning that allow for the bonus to be added to perception-checks to determine surprise and even initiative while underground or surrounded by stone, making the feat in this iteration not suck. Kudos!

Now while most of the upgrades make sense, there also once in a while is an effect that just is broken – personally, I won’t ever allow the light step upgrade at 7th level near my table – it extends the ignoring of difficult terrain to unnatural environments, which becomes problematic once one recalls the amount of effects, spells and items that can create unnatural difficult terrain. Not a big fan. What do like is that some of the teamwork feats herein, at their highest level, allow you to treat all adjacent allies as if they have this feat. Makes sense and works…and is probably closer to what Teamwork-feats set out to do than the regular iterations.

Editing and formatting…this time around are actually very good -almost excellent. The only minor glitches I stumbled over, were some missed italicizations, nothing grievous. Layout adheres to a printer-friendly two-column standard and the pdf comes fully bookmarked for your convenience and also hyperlinked.

Brian Berg has taken the APG and turned the feats into scaling ones – and they work. Where issues present themselves, they are few and far between and often are based on Paizo botching that particular source-feat. Overall, I’m positively surprised to note that this installment of Feats Reforged works imho even better than the first, salvaging some feat-choices that in the original iteration were rather…let’s say bad. That being said, one gripe with the series so far hasn’t been remedied and that would be that feat-rich creatures and characters simply benefit more from these reforged feats,   thus slightly altering the balance. While the resulting power-creep is marginal at best, some concise advice for DMs to handle it would have been much appreciated. Still, if you don’t mind the rather conservative benefits added to the feats, this is a great buy. My final verdict will hence clock in at 4.5 stars, rounded up to 5 for the purpose of this platform.

You can get this supplement of scaling feats here on OBS and here on d20pfsrd.com’s shop!