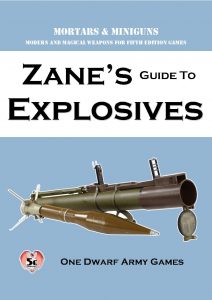 This pdf depicting rifles for 5e clocks in at 10 pages, 1 page front cover, 1 page foreword/editorial, 1 page SRD, a total of 1 page blank (at the end of the chapter, there’s some serious space left), leaving us with 6 pages of content, so let’s take a look!

This time around, we do not begin with the usual array of gun-explanations – no surprise, considering the different subject matter! Instead, we are introduced to a total of 4 grenades: Smoke grenades cost only 30 gp; stun grenades cost 50 and require a Con save (DC 13) to avoid being stunned (!!!) for 1d6 rounds, making them pretty powerful spam-items. Damage-wise, both concussion and frag grenades deal 4d6 damage, with type being bludgeoning and piercing, respectively and a DC 13 Dex-save to halve. Weird: Concussion grenades only have a 10-ft-radius, while frag grenades have a 20 ft. radius…though both cost an equal amount, namely 70 gp. All grenades weigh 1 lbs. They can “be thrown up to 60 feet away by using an action.” Okay, I’ll play. Do they have the Thrown property? Short/long range? Do they inflict more damage on crits? No idea. The weapon formatting/presentation for these is all off, which is baffling considering that guns etc. were pretty precise in that regard. The pdf offers two grenade launchers, one regular and one underbarrel version. Underbarrel launchers must be attached to other two-handed weapons, but can lop a grenade 200 ft.; regular grenade launchers can fire up to 300 ft. Why would you ever use a non-underbarrel? Seriously, the 100 ft. don’t make much difference and since underbarrels don’t increase types or anything…well. Both rocket- and grenade launchers completely deviate from how weapons are presented – no properties, no classification, no proper range; DCs of grenades do not change with wielder proficiency etc. All in all: Sucky options, presented in a barely functional manner. You will deal more damage with every weapon class in this series.

A total of 3 rockets are included as well; they weigh 2 lbs each and high-explosive rockets detonate in 30 ft.-radius for 4d8 bludgeoning, with Dex 13 to halve and Incendiary rockets cause 2d8 fire damage in the same radius, but burn on for 1d6 fire damage unless put out by a successful save. Both of these cost 150 gp a pop. The third rocket costs 200 gps and is “Armor piercing” – in name only. It only deals its damage in a 5-foot radius, but inflicts 4d12. Same DC to halve. Rockets must be fired from a rocket launcher at a target up to 600 ft. away. Loading one is an action and a team of two can load and fire a rocket launcher in one round…got ya. So basically, you need a hireling monkey and it’s better than a grenade launcher; without one…it’s just as fast. Okay… Rocket launchers lack any classification as weapons. The save DC, much like grenades, does not increase or take wielder capabilities into account. I have no idea what properties the weapon has. A total, unmitigated mess.

Unlike any of the Zane’s Guide, the rules provided for explosives feel lackluster, quickly cobbled together…and in the context of the series, they are actually worse in damage output than pretty much all guns. WTF. There is nothing of the care and passion here in the base system that you could see in the gun-tweaks.

The exotic stuff is mostly devoted to rockets and grenades; a total of 3 weapons are included – the Dwarven Grenadier underbarrel grenadelauncher can be used 1/turn as a bonus action. The Lancaster grenade launcher can contain up to 6 grenades and 3 grenades may be reloaded in one action. Doubling Dolly, the magical rocket launcher, may fire a copy of the last rocket fired while it is not loaded, but only once per day (dawn as reset, not short/long rest) and only if the rocket was of rare or lesser scarcity.

The magical rockets and grenades that make up the remainder of this section run a gamut of power: The uncommon grenade Oubliette generates disadvantage to ranged attack rolls and imposes a DC Strength check (why not a save?) to move outside the area. “On a failed check, the creature cannot move outside the area during its turn. Okay, does this end movement? May the character abort movement before reaching the perimeter? No idea. Matryoshka detonates at 60 ft and has a Dex save of 14. Basically +30 ft. radius, +1 DC…which is honestly pretty cookie-cutter. Purcupine is more intriguing as a rocket- 8d8, 30 ft.-radius and covers the area in caltrops is more interesting. Pacifier is save-or-suck grenade: On a failed save, you drop unconscious for 1d6 MINUTES. Wabbit is an interesting grenade (rocket would make more sense to me, but oh well) that leaves a 10-ft-line between you and the detonation point.

The Tidal Wave grenade begins with a 20 ft.-detonation…and doubles the radius and damage output on the two subsequent rounds. Why is there no means to end the effects in progress via e.g. dispel magic? Bad Medicine is a grenade that causes necrotic damage and may heal nearby allies…though the number of allies affected is equal to the number of foes hit…which becomes a bit weird when throwing bags of kittens in the area of effect, but considering the price of the grenade, it is not a strategy I’d recommend. The BOOMerang is a grenade with 5 charges that returns to the thrower – but can it be caught? No idea. Weird: “any creature can be damaged by the BOOMerang only once.” – Once per round or once; RAW it’s once, which becomes odd considering the explosion following the expenditure of the final charge…would that count as an increase of damage or as a second explosion? That’s also relevant for damage thresholds etc. The Duke causes a 200 ft.-radius 15d8 radiant explosion. Why does this and the aforementioned BOOMerang cause radiant damage? No idea.

Frosty Welcome may slow targets. The Predator-rocket rises 50 ft. after being launched and goes into hunter mode, becoming a construct that has a rudimentary Intelligence and may fire at foes; it explodes upon being destroyed. The creature has its own initiative score and may keep flying for 20 rounds. Odd: The series has a more streamlined version of the concept: You see, the predator requires no action to direct, when another similar concept required just that. A bit of internal inconsistency, I suppose. Stormbringer is a rocket that deals a combo of bludgeoning and lightning damage and may fire up to 4 lightning bolts at targets within 40 ft. of the flight path. Okay, what is a flight path? A line? Can you fire it in an arc? Are the lightning bolt targets randomly determined? The item states “Each bolt must hit a different creature”, but says nothing about any form of control of who is targeted.

Sentinel is also problematic: It basically fire the grenade at a point, where it hovers. It then proceeds to fire a bolt of acid at any enemy creature within 30 ft. of its location AND at any creature moving between your turns, but may not fire at a creature more than once from the start of your turn to the end of your next turn. The grenade may float for 30 rounds…and basically behaves like a creature…which would make an appropriate write-up MUCH simpler than the complex wording here. Weird. Thoughtful Gifts generate 4 sets of cluster bombs with a 20 ft.-radius each within 80 ft. of the detonation, which is interesting, if powerful for a bit more than 2K gold. Thunder Storm is oddly named, considering that it generates a 3-round ball of lightning that discharges thrice at the end of your turns. No thunder damage, mind you. Volatile Infection basically is a grenade that causes fire damage that may spread from those ignited by it – pretty cool! Finally, Weatherman has 7 charges and regenerates these charges – after being thrown, it hovers at a height of 30 feet over the target point and thereafter, you may spend a charge and a bonus action to make it fire fireballs …it is basically another turret-y grenade and much like the Sentinel, I think it’s secondary form would have been better suited as a construct, also for internal consistency’s sake.

The pdf’s supplemental material contains 2 new feats: Grenadier increases your grenade range (based on the wonky base system) to 90 ft., add 1/2 proficiency bonus to a grenade’s save DC or add +1d6 to the grenade’s damage dice – cool: Takes choice in the case of multiple damage types into account…but does the benefit extend to secondary effects like magical discharges after detonation etc.? RAW, some of the options don’t inflict primary damage (Thunder Storm disappears and just creates the ball lightning, for example…), so that is a bit opaque. The second feat increases maximum rocket distance by +50%, lets you add 1/2 proficiency bonus to rocket saves and add +1 damage-die to rockets…with the same boons and minor issues as those the grenade-feat suffered from.

Georgios Chatzipetros’ guide to explosives is baffling to me. The other installments in the series establish the relatively concise framework of guns; exhibit sufficient knowledge on how the weapon-rules work and while they are not perfect, they show passion for the subject matter and a general care for 5e’s design requirements. Additionally, while their damage output is relatively high, they remain, for the most part internally concise (shotguns having their own issues, but I digress). Explosives are none of these things. The presentation of the base rules is a mess. Internal consistency of the tricks of grenades and rockets is not really there and the whole pdf feels like a half-hearted addendum to the gun-rules of the first 4 installments. Sure, it’s less than a buck and has some nice ideas to scavenge, but as written, I wouldn’t/couldn’t use these explosive-rules in a D&D 5th edition modern game…they require a rewrite and re-evaluation of their mechanics and internal presentation and balancing. This is not a complete waste of money, but it is a highly problematic installment. My final verdict will clock in at 1.5 stars, rounded up to 2 due to the VERY low price point.

You can get the whole series here on OBS.