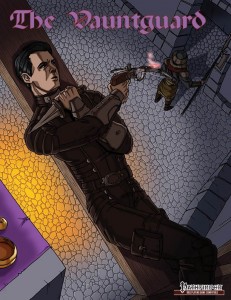 Drop Dead Studios’ first new base-class can be summed up with one TV-trope- Crazy Prepared. If TV-tropes have not yet managed to suck hours out of your free-time prior to reading this – you’re welcome. 😉 Kidding aside, though – honestly, there was no existing way to play the trap-creating agent-style fighter and the Vauntgaurd seeks to remedy that, so what does this class do?

Mechanically, the Vauntguard gets d10, 6+Int skills per level, a good BAB and good fort-and ref-saves as well as proficiency in simple and martial weapons, whips, hand crossbows, light and medium armor and shields (excluding, as almost always, tower shields) – which is quite a bit and basically more than e.g. the rogue (Even with Rogue Glory) or the standard fighter can hope for. This is offset somehow, though, by the Vauntguard being MAD – multiple attribute dependant.

The signature move of the Vauntguard, though, would be the Vauntguard traps: Also available from first level onwards: The Vauntguard can create an unlimited amount of simple traps, provided the character has a light weapon, for simple traps make atk-rolls at +5 or trip-attempts via trip-wire. They can be set up as full round actions relatively problem free. Improvised versions can of course also be used, as can a trap be made to activate e.g. alchemical items. The DCs to disable and notice these traps is up to 10 + 1/2 Vauntguard class levels + Int-mod. They last for 1 day per Vauntgaurd level or until triggered.

Beyond even these traps, the Vauntguard may also create 1/2 class level+Int-mod supernatural traps that use the same DC and can be set up as a standard action after having been created as a full-round action. Yes, this means they can be carried around, though they last only for 1 hour per level. Supernatural traps can be either elemental blasts, sanres that stick you in place or traps that temporarily sicken foes. If you’re like me and love Drop Dead Studios’ Rogue Glory-supplement, you’ll like that they go into the interaction of their revised ranger traps with Vauntguard traps.

At 2nd level, the class gets 1/2 level as morale bonus to disguise and bluff and checks to gather information as well as trapfinding. At every even level, a Vauntguard gets a so-called aptitude, essentially a trick alike a talent and a total of 39 are provided. Some of these let you wilder in other class-toolkits, like rogue talents and access to a familiar or equipment tricks, poison use etc., whereas others include a wide variety of new supernatural traps – e.g. a snare that lifts the target into the air, an extradimensional hole-trap that reverts to an innocent floor after its duration has run its course, a trap that delivers sensory feedback (GOLD for infiltration/spying!) or ones that summon sleet or summon bat/rat swarms (nice Batman-nod). Of course, increasing trap-DCs is also possible.

In contrast to the rogue, though, the Vauntguard only gets evasion at 10th level and while they may e.g. change damage-type dealt by improvised melee weapons  abd even later improvise any type of equipment, at least the DM gets to say the final say – a word of warning: If your Vauntguard gets full-blown McGuyver and wants to fix a planar rift with some chewing tobacco, it’s time to put the foot down…

Kidding aside, this ability has a LOT of potential, as has the ability to weaponize supernatural traps. Adding cha-bonus at 5th level to will-saves might be a bit too much, though, seeing how the class already has two good saves. The highest level Vauntguards can go action hero on you and grant themselves an array of class level temporary hit points 1/day. The class capstone, +3 uses of Force of Personality, is in direct comparison not that exciting.

The pdf comes with two new feats to gain more supernatural trap uses and an extra aptitude respectively as well as two items that are imho integral to making this class work – alchemical (and rather cheap) trap paper and trap pellets to carry around your supernatural traps – without them, I’d be complaining about lack of in-game representations for them right about now.

6 new magic items are included – and take a bow before James Bond. Ever wanted to decapitate victims with your returning throwing hat? In here. An Extending rapier? Yep. A lie-detector in ring-form? An oil to help you seduce just about anything? What about a cummerbund that allows you to change shape? These are awesome -not only for Vauntguards!  Taking a cue from “The Man with the Golden Gun”, we get the golden crossbow as one of two artifacts and a headband that grants almost Sherlock Holmes-style insight into the workings of the world.

After a short section on Vauntguards and their role in the world, we get…*drum-roll* SAMPLE CHARACTERS. A boon for DMs wanting to use the class right away, we get one  level 7 and one level 13 sample character, both lavishly illustrated.

Editing and formatting are very good, I didn’t notice any significant glitches. Layout adheres to a beautiful, relatively printer-friendly  2-column standard and the second, even more printer-friendly version deserves special mentioning, as it omits the background. The pdfs both come with rather beautiful artworks, many of which I haven’t seen before and frankly did not expect to see at this price point. While the pdf is hyperlinked to d20pfsrd.com and generally, I do applaud such linking, I noticed e.g. the word “Good” in “good graces” being hyperlinked to the alignment-page etc. – dead hyperlinks like this only complicate the usage of the pdf and don’t help, though in contrast to much worse offenders I’ve recently read, the hyperlinks do show that they were crafted with relative, albeit imperfect care. On the downside, this pdf has no bookmarks in either version, which I honestly consider a major comfort detriment in anything above 5-6 pages – and e.g. Jon Brazer Enterprises has started bookmarking even 2-page pdfs. So yeah, that’s a downside.

When one of the authors and mastermind of Drop Dead Studios, Adam Meyers (the other author being Isaac Ellsworth), contacted me to review Rogue Glory not too long ago – I admit I expected it to suck. Long story short –  I didn’t and has become a staple at my gaming table. Can the Vauntguard hold up to this?

Well, at first when I read the mechanics, I thought: This is OP! However, in contrast to rogues and fighters the lack of bonus talents and the need to also cover int and cha as well as str/dex + con makes for a class, which, while not particularly weak, should not unhinge any game as long as a DM does not let the player go all McGuyver on them. That being said, I’m not a big fan on the bonus to will-saves – that amounts for too much in the saves-department for a full BAB-class for my tastes. That being said, even with these minor concerns, I still consider the Vauntgaurd a well-accomplished design-goal, as it allows you to essentially create a secret agent-style character. Could it be abused?

Yes. A Vauntguard could create the MOTHER of all trap gauntlets and is a nightmare when s/he knows you’re coming and a DM has to be aware that players will seek to do exactly that – lure their enemies into playing fields that make minced meat out of them. If you can handle this, then give this well-designed class a chance – it deserves it and is a very solid addition to the class roster. My final verdict will clock in at well-deserved 4 stars.

Want to go secret agent on your foes? Here you can on OBS and here on d20pfsrd.com’s shop!