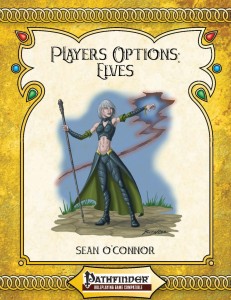 This pdf is 13 pages long, with its front cover coming as a separate jpg, 1 page editorial, 1 page SRD, leaving us with 11 pages of content, so let’s take a look, shall we?

The pdf kicks off with two new variant elves, first of which would be the Necrom elves, who are obsessed with  extending their already considerable lifespans – at any cost but undeath. These insular elves get +2 to Dex and Cha, -2 to Str, suffer no penalty for inflicting non-lethal damage with bludgeoning weapons and ammunition, gain resistance 5 to negative energy and +2 to saves versus death effects, energy drain and spells/spell-like abilities of the necromancy school and don’t lose HP when gaining a negative level. They also get +1 to atk against undead and +2 to heal checks – per se all good. What breaks the race for me is that they get Lifesense 60 ft. At first level. Lifesense as if they had blindsight. Come again? Not gonna happen in my game.

The second variant are the twistborn elves, warped by transmutation magic into consummate spies. They get +2 to Con and Int, -2 to Dex, count as elves and shapechangers, may use alter self to assume the appearance of small and medium creatures sans adjusting their ability scores, may 1/day roll bluff or diplomacy twice and take the better result, may retry failed social attitude adjustment before 24 hours have passed, are immune to magic sleep and get +2 to saves versus transmutation. Per se, I consider the combination of attributes/abilities interesting – though the shape-changing is weird at best in my opinion – using the spell as a basis instead of actually gaining the benefits and drawbacks of a small size, irrespective of attribute-bonuses would have imho felt more organic. Also: The social rerolls feel a tad bit too much for me – shapechanging is already powerful enough sans the additional benefits. Still, much better balanced than the variant races in the last couple of installments of the series.

Next up, we get a bunch of new feats, 14 to be precise:  Elemental Penetration allows the caster to increase spell-levels by +1 and decrease the elemental resistance  of foes hit by the spell by 1 per caster level, allowing you to penetrate elemental resistance. Ok, I guess, but not too exciting. Eleven craftsmen may increase crafting time by 50% to add the elven special quality to their items and there’s also an improved one that reduces Dcs by 3 and also adds the masterwork quality for 50% – but it doesn’t specify whether it stacks with the increase from the first Elven Craftsman feat. They may also increase their senses by +2 to perception and +2 to atk when attacking foes beyond a ranged weapon for which they have weapon focus’s first range increment. +1 (or +2  if you have 10 or more ranks) to all dex-based skills can be gotten by the elven grace-feat – though whether having 10 ranks in one skill to get the increased bonus for all skills suffices or whether only those skills with 10 ranks get the +2 bonus, I can’t tell. Rerolling failed knowledge checks that went sour by more than 5 Int-mod+3 times per day, is an interesting one.

Favored Terrain allows you to get a +1 bonus to initiative, Knowledge (geography), Perception, Stealth and Survival when in said terrain as well as a modified weapon familiarity based on terrain when taken at first level. One of the cooler feats allows you to take the hands of others to share what you perceive via your divination. Another really cool one allows you to grow structures – quadrupling creation times, but  requiring you not paying any masterwork components. There’s also a feat to gain dark vision, a feat to get your movement rate when swimming (but NOT swim speed – an important distinction that makes this feat rather cool and balanced!). There’s also a feat that allows you to develop a sixth sense for danger, giving you + CR of a given creature to perception-checks to notice the creatures – rather specific and at higher levels, it doesn’t make much sense – high CR creatures are not necessarily often subtle and the CR-metagaming that is part of the feat is not particularly good design in my opinion. There’s also a feat to run through the tree-tops sans requiring climb and acrobatics-checks. Finally, there’s a feat for +4 to will when in favorite terrain. Ok one, I guess, though exciting choices are something different.

After that, we get 5 flaws depicting elevn ennui, an addiction to elven sweets and similar iconic flaws of the race renown for longevity.

After that, we get a new elven armor and item properties that are more valid for armored casters/to be enchanted, a new type of armor, elven gossamer fabric, elven hair bowstrings and two types of metalweave fabric. We also get a magical armor for elven rangers as well as enchanted elven fighting knives – this part of the pdf being by far the best component offered in the pages.

Editing and formatting are very good, though not perfect. Layout adheres to 4WFG’s two-column b/w-standard with nice full color artwork supplementing the content. The pdf comes fully bookmarked and hyperlinked for your convenience.

The races this time around are better designed than the variants in other installments of the series, but the supplement still is not perfect – while high in concept and fluff, many of the feats feel more appropriate for NPCs and the power-level of them is rather far-spread. Additionally, many of the feats, while iconic, could have used a slight rephrasing, making their wording more precise. The flaws and items, as I’ve come to expect, the best part of the pdf.

Overall, we get a solid offering here, but the pdf still is not absolutely mind-boggling – it offers  some valid options, but there are also several components in here that could be considered filler and not too particularly exciting. All in all, this pdf will clock in at a final verdict of 3.5 stars, slightly missing being rounded up to 4 – instead, I still feel like I have to round down to 3 for the purpose of this platform.