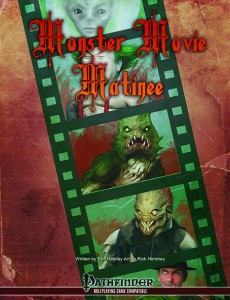 This bestiary clocks in at 26 pages, 1 page front cover, 1 page editorial, 1 page SRD, 1 page back cover, leaving us with 22 pages of content, so let’s take a look, shall we?

So, as the introduction (accompanied by a ToC with CRs) specifies, this book constitutes a love-letter to monsters that pay homage to classic horror flicks – not the silver screen of old, but rather to the more recent creatures featured. The advice to let them build up momentum is something I, indeed, with years upon years of horror gaming under my belt, would also advise in favor of. So let’s take a look, shall we?

The first creature herein would be the CR 5 Aquamonstrosity, which is interesting in that it obviously is a fish-man creature, yes – but one with a powerful ability: By burning some hit points, these beasts can execute either an additional attack or an additional move action. Alas, the wording stumbles here – the example specifies that the creature can perform a full-round action and a standard action, when this directly contradicts the previous assertion that the creature can only get an additional move action or an additional attack: There are more full-round actions that full attacks. A rather annoying factor that unfortunately can be seen throughout the pdf, would be the fact that the racial modifiers for the respective monsters are not listed, which renders the question whether the skills are correctly calculated an educated guessing game. Granted, not in this instance, but still. At the same time, it is nice to see that the changed action economy’s impact on rend has been taken into account regarding the wording of the latter – kudos there!

The carnivorous mantrap with its domination-capability should also ring true as a classic, with the monster’s ability to understand languages – in spite of a lack of an Int-score, though I’m not sure I get the omission thereof. Somewhat problematic – the blood drain additional effect does not specify whether it applies to bite and tentacles or only one of these attacks. At CR 3, Grey Invaders get death rays and nitrogen dependency, making their suits important for their efficient functioning. An okay critter, if not a special one.

The CR 7 Jungle Predator obviously would be a direct quote of the beloved scifi-franchise, including at-will fire blasts and invisibility. Oddly, I think there is something missing regarding the iterative attacks – at +11, +4 of which are due to Strength, they should have iterative attacks. Furthermore, the line seems to assume two-weapon fighting, which is dandy with me; alas, then the -2 penalty is missing. At the plus-side, I love the lethal self-destruct upon death. The Killer Clown, at CR 11, obviously is a call out to IT, with an ability to let it “not sink” (why not simply go the water walk-route? As written, the ability makes e.g. interaction with magma and slimes less than obvious – sink or no sink?) and a cool idea – the first kill a day increases the fear points of the creature, granting it bonuses; at 7 fear points, it becomes dormant. This essentially puts a nice timer on the creature and makes its actions make more sense, while also explaining the actions of the beast. It also heals whenever someone fails a Will save against its spells and abilities. Okay, the final form-giant spider (stats in appendix for your convenience) is a bit lame, but the blood-filled balloons…nice touch! And yes, this is a potential TPK for PCs acting less than smart.

Night terrors are manta-ray-like creatures with a barbed tail -and they can decrease lighting conditions, with more abilities overlapping, bringing darkness and a sneak attack that works even when foes have concealment. Interesting one – and +1 point if you can name the inspiration here! AT CR 9, Nightmare Stalkers would be the representation of Freddy et al., with the ability to shake off ongoing effects, change shape and have hallucinatory terrain. At CR 10, the Shark Tornado is odd – it does share several traits with swarms, but does sport deviations from it – due to the creatures in question being medium, the type is “animal”, subtyped as swarm. Over all, I really liked this take on the sharknado-concept from a mechanical perspective – why? Granted, mechanically, the troop-subtype may have been the better choice than building a swarm with medium-sized animals. At the same time, the mindless destructive potential of the swarm *DOES* feel like a swarm – so yeah, good with it. The formatting has failed to use the correct font and style for the second half of the statblock’s tornado-ability explanation in a slightly annoying formatting glitch, though.

The Snatchoid, obviously, would be a nod to the cult-franchise Tremors – including improves damage on surprise-round grabs – pity we do not get the evolved versions of the life-cycle, though. The Unstoppable Maniac, with the machete as the weapon of choice, would be a nice rendition of Jason etc. – with some resistances, DR and SR, these guys are tough. They can also rise again at 1d8 HP (which is NOT much) upon being killed and yes, they can dimension door. Additionally, they may not be able to run, but they ignore difficult terrain, making it very possible that they catch up to players…sooner or later. Their damage-potential, though, is pitiful at only 1d6+6.

Editing and formatting are okay – while I did notice some minor hiccups, I also noticed quite a few statblocks that sport no grievous issues and in total, this is the most refined monster-book I’ve seen from Fat Goblin Games so far. Layout adheres to a beautiful 2-column full-color standard and the pdf comes with one downright beautiful original artwork for each creature – absolutely awesome, especially at this low price-point. The pdf comes fully bookmarked for your convenience.

Author Eric Hindley provides quite a nice array of monsters here – though beyond the minor hiccups, I think this pdf does have a bit of an issue in theme: See, as any Ravenloft or horror-GM can attest, the creature is EVERYTHING in a well-crafted story in the genre; the same holds true for the monster movie genre. We do not cheer for the obnoxious stereotypes that are slaughtered – we like the monster.

The cultural ramifications for this are not as simple as one would think and lead far into the path of analysis – beyond the coming-of-age-imagery, the symbolism of sexual awakening inherent in the narrative is a complex one. And one, quite a few of the beasts herein can support.

At the same time, though, what we have here are arguably center-stage adversaries – bosses. BBEGs. And for that, there’s no two ways around it, they sorely lack staying power.

With the notable exception of the Killer Clown, the creatures herein do not have pronounced defense capabilities that would stand in the face of PCs of the respective CR. Additionally, the damage-output of some of them undermines the horror they generate – the Jason and Freddy-iterations especially simply don’t do that much damage, with the former lacking the regenerative feed-on-fear capabilities. While this may be me wanting “story”-monsters worthy of their inspirations, my playtest confirmed my suspicions – the creatures are not pitted versus hapless teenagers, but seasoned adventurers and these guys, alas, can make short process of most of the adversaries herein.

Thus, the issue of this pdf lies in a somewhat schizoid focus – on one hand, the creatures should be stars, creature-features if you will; on the other hand, they lack the staying power and capability to deliver on said promise.

The issue in horror roleplaying, especially with d20-rules, is that hit point loss alone is not creepy – it happens all the time. You need the threat of death, of crippling afflictions, of lethal attacks to transport fear to not only the characters, but also to the players. And here, this does not deliver. When some of the creatures in this book attacked, my players lost all respect for them. While in no way a bad supplement, this discrepancy does mar it for me.

Do not treat the monsters herein as though they can carry the final boss fight – instead, I’d suggest a modified appropriation of the concepts and statblocks and enhancing them, should you expect to truly frighten your PCs.

What remains, is a nice little bestiary with gorgeous artworks and a mixed bag of adversaries – not bad, but also short of its potential. My final verdict will hence clock in at 3.5 stars, rounded down to 3 for the purpose of this platform.