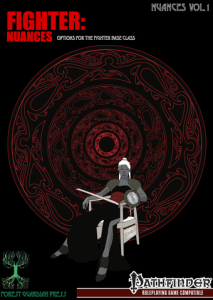 So, it happens. Sometimes, my dynamic working process, jumping from module to crunch and back makes me postpone a given review because I’m not in the right mind-set…or have no playtesting slot…or…or…or. Most of the time, I get back to the book in time. And sometimes, I lose track of a book in the depth of my hard drive. This fate, alas, had befallen this book. Still, they say “Better late than never” -so let’s dive into this!

The basic premise of this supplement, in a nutshell, is to provide the much maligned fighter-class some unique benefits that actually make sense, that make you want to play it….that lend an identity to it. These unique features are called “nuances” and can be taken instead of their bonus feats. Simple mechanic so far – so, how is this different from some of the other fighter fixes I’ve reviewed?

Well, formatting-wise, the nuances do not change the way the basic fighter-class works, so it’s pretty much a plug-and-play-style supplement. We do not have any traditional class-ability exchanges, so the availability of Michael Sayre’s great bravery-feats is not impeded – which can provide some actually interesting synergies. Beyond this, it should be noted that the material does some interesting things: Fighters of 10th level or more can, for example, replace up to Int-mod combat feats with others via a longer training of 1 hour – essentially, smart fighters can adapt better. Let’s say you’ve specialized in tripping and now you’re in a dungeon full of creatures that can’t be tripped. Wildcard the feats and get new ones! The interesting thing here is that, while you still have to fulfill prereqs and the like and can’t trade off prereqs sans also trading off the follow-up feats, you can still change, in a couple of days, your whole combat feat-array to match the task at hand. This is powerful, yes, but the minimum level helps keep the nuance in check. A similar trick may btw. be executed for weapon training as a class feature as well.

If you were always annoyed that the big brawny fighter made such a sucky diplomat, what about a nuance that lets you utilize your bravery bonus instead of your Charisma modifier for social skills? Now I am honestly pretty weary of Brute Style – at -2 to attack, you can one-hand two-handed weapons. For one, there’s a reason for that one’s limitation. Secondly, the nuance does not note whether the weapons still are treated as two-handed weapons for Str/damage-purposes or as 1-handed weapons. Clarification would be in order here. I am also no fan of any ability that grants immunity to something – there is, e.g., an ability that makes you completely immune to disarm – why? Why not utilize a significant, scaling bonus instead? Flat-out immunities tend to lead to ridiculous examples – when e.g. Thor can’t disarm a puny 2nd level fighter with this nuance.

On the other hand, options to increase concentration (including stacking info) of hostile casters is pretty nice, and, since it’s based on bravery, it scales. Compensative Specialization is highly problematic – it allows you to add your fighter levels to attributes for the purpose of feat qualification. A level 10 fighter would e.g. add +10 to all his attributes for the purpose of feat qualification. Doesn’t sound bad, right? Well, it kind of is – not necessarily due to this pdf’s fault, but still – you see, Pathfinder has quite an array of ridiculously strong feats intended primarily for monsters. While many of them have a primary lock-out via types, they also tend to have a second one that is based on attributes. Alas, there are quite a lot of ways to get that racial component via apotheosis, exotic races, etc. – which leaves the attribute. This nuance unlocks these feats. Whether this becomes problematic for you or not depends ultimately on how you handle feat-availability.

Scaling bonuses versus fatigue (and later exhaustion and paralysis – nice condition-scaling!) and easier access to critical feats, on the other hand, make imho sense. + Bravery AoOs per round, general exotic weapon proficiency, and at 8th level+, evasion, make sense. Wait what? I’m not complaining about the latter? Jup – since the bad Ref-save keeps it less useful than for the classic classes that have access to it. Higher-level fighters may also select a specific array of SPs Con-mod times per day. Leadership with bravery-bonus sans prereqs can also be gained. A nice means to make fighters be more relevant in investigations would be the nuance that lets you utilize Profession (Soldier) for multiple skills.

An option to increase bravery bonuses not only works well with these options – indeed, the math surprisingly still works with Bravery Feats. Ignoring 2+weapon training bonus DR is okay, though I would generally prefer a scaling mechanism for the DR – ignoring e.g. even some points of DR/epic at 6th level is not something I consider rules-aesthetically particularly smooth. Another nuance that can offset immunity versus a given maneuver is interesting, though the primary benefit of gaining a maneuver-related feat feels kind of redundant – they already are combat feats…though one could make a case that ignoring the prereqs makes it viable for certain builds and allows for tighter optimization. A reflexive damage versus will-subjugating options also makes sense. On the downside, adding a second attribute (Wis) to Dex to AC in light armor is pretty monk-ish and, while concept-wise not broken, it doesn’t make too much sense build-wise at the late level it can be taken. Level 10 has a game-changer – If you move less than half your movement, you may still make a full attack and potentially, you can expend SP-uses granted by another nuance, to end a charge with a full attack or full movement – this is very powerful and per se flavorful – and, with level 10, it has a high enough level-prereq. however, also ignoring difficult terrain with such a charge…that’s one step too much for me and less high-powered campaigns may want to increase the minimum level even further.

Heck, the pdf has a way to make endurance relevant, adding +1/2 fighter level and allowing you later to sleep in heavy armor – neat! Speaking of which – the pdf also has an option I ALWAYS considered to make more sense – adding shield-bonus to Ref-saves: Come on, standing with the magical shield raised high in the dragon’s breath is iconic! Fighters regularly duking it out with the big ones will like means of scaling ignoring of size modifiers to an opponent’s CMD. Counting as having a teamwork feat also is nice -your allies will definitely like you for it. One of my favorites is btw. Ultimate Veteran – this nuance eliminates aging penalties, allowing you to efficiently play a grizzled veteran sans sick penalties – and while before, this was mainly a flavor-option, it now also allows for easier identification of enemies, adding a further dimension to the nuance – great to see Forest Guardian Press further caring for the product and streamlining it!

The pdf does not just leave you with these options, though – if you’re looking for means to making the nuances feats, combing them with bonus feats (instead of either/or-choices every level) – or even codifying them as deeds – these additional options really help integrating nuances in a game and make the difference for me by accounting for table variation (and correctly appraising the potential impact of these choices)- kudos! Speaking of which – there also would be the Mystic Fighter’s nuances – a variant that may use further nuances to poach spells from the magus and bloodrager-lists, phase around the battlefield – essentially, for if you want a more magical fighter. Finally, handy advice is given to players and GMs to make their own nuances – advice that some designers should check out… *cough* dip-avoidance */cough*…neat!

Editing and formatting are very good – while not perfect, this is a well-edited pdf. Layout adheres to Forest Guardian Press’ two-column b/w-standard with copious nice b/w-shadow silhouettes as artwork – I really like them – they look nice and provide an aesthetic identity. The pdf comes fully bookmarked for your convenience and with a second, more printer-friendly version – kudos for providing that one.

Christos Gurd’s fighter nuances walk the line between being downright awesome and inspiring, and being slightly problematic. While one can definitely see the influence of Morgan Boehringer and Bradley Crouch, two veteran designers of great crunch, there are still some options that can prove to be problematic. On a rules-aesthetic level, I am not a big fan of certain design decisions (like the flat-out immunities), while absolutely adoring others – generally, there are several intriguing scaling options utilized and the pdf. What’s great herein is really great and the problems that are here do not need to actually apply at your table – which, alongside the extensive design and implementation-advice, ultimately makes me round up from my final verdict of 3.5 stars. If you’re looking for some unique further options for your fighter, take a look at this one!

You can get these nuances here on OBS and here on d20pfsrd.com’s shop!
Endzeitgeist out.