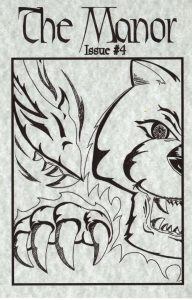 The fourth installment of the Manor-zine clocks in at 39 pages, 1 page front cover, 1 page editorial/ToC, 1 page introduction, 2 pages of advertisements, leaving us with 34 pages of content, laid out in 6’’ by 9’’, meaning you can fit up to 4 pages on a sheet of paper when printing this out.

All right, this installment of the Manor comes with two distinct chapters: The first of these would be an adventure/environment to explore, and the second would be a mini-bestiary of sorts, one that contains no less than 9 new creatures, illustrated by Jason Sholtis and Mike Varhola. Each of the monsters comes with a full-page b/w-illustration, an original piece, mind you. These are much better than what you’d expect to see for the low price point, so kudos! Rules-wise, they note HD, ascending as well as descending AC values, special features and movement rate/alignment and challenge level/XP. Saves are not classified by type.

At challenge level 9, penned by Jason Sholtis, we have the 1-3-headed basitrice, a horrid thing that is a magic-user’s experimentation gone horribly wrong. Two of the most loathed low-XP save-or-suck creatures of OSR-gaming, basilisk and cockatrice, rolled up into one amalgam of deadliness! As such, they come with d6 base body plans, 6 different heads and 7 different, highly lethal gaze effects that range from petrification to instantly aging 1000 years or turning to salt. Yeah, players should better have some mirrors…

Rob Conley provides two creatures here, the first of which would be the boglings, a take on the abyssally-tainted frog folk that can immobilize targets with their tongues. Unfortunately, these tongues lack a range for how long they are. The temple guardian, also penned by Mr. Conley, is a floating ram’s head that can be created by a cleric with a new 5th level spell. It can only fly up or down and fire both lightning and fire. The more resources are expended via the spellcasting ritual, the more potent the guardian will be. Boric G introduces the lesser and greater sneachta kin: The lesser one would appear as a swirling mass of acidic snowflakes that in actuality are tiny beings. Interesting! The greater variant becomes basically a sentient ice missile. Unfortunately, the rules are somewhat opaque here – the statblock notes infection, but the text provides no rules for this; similarly, the special, defensive qualities noted in the text are not represented in the statblock.

Ken Harrison provides two delightfully weird critters: The linen golem is a nice, low-level golem made of clothes and with access to limited cleric spells. The beer ooze is awesome in that it, bingo, inebriates the PCs. The rules here are much tighter and instead of a wall of text, we get bolded headers for the abilities of both creatures – presentation-and concept-wise, two winners. This pretty tight presentation also extends to the second of Tm Shorts’ contributions to this section, which consists of the molten spiders. Weirdly, the corpse flies, which have a really cool artwork and a rather amazing write-up do not sport this type of formatting and do not classify their infestation ability.

The other half of this issue is taken up by the Incident at Butcher’s Creek, a module for characters level 5 – 7, penned for S&W. It is classified as difficult and rated Teen and should have a good mix of PCs for the group to be successful. In order to discuss this adventure, I have to go into SPOILERS. Potential players should jump ahead to the conclusion.

All right, still here? Great! So, this adventure actually comes with a fully mapped hamlet, namely Low Ridge. This place is amazing. It contains some dangerous individuals of the retired adventure type and honestly, represents the best thing to come out of the Manor so far – the village is amazing and each of the individuals has its own hooks and little plots; there is the mandrake farm, where the rather abusive farmer Henry has become rather docile; there are obtuse pig farmers; there is a cabin of a magic-user/painter; there is a viz miner…it’s a small place, but all of the NPCs, many of whom come with stats, feel alive and sensible.

Now, the basic premise is pretty simple – the PCs are tasked to hunt down shadow panthers, a new creature that can be pictured as a variant of the displacer beast; i.e., they are deadly cats with tentacles, but they can cause Strength drain and teleport through the shadows. Exploring the caves that hide them and getting rid of the menace is just the start, though. You see, there is one home that has recently collapsed, and under it, there lairs the Or’Drog, a malicious, demonic entity that is responsible for the paranoia and behavior of the villagers – and defeating this deadly threat in its own complex below the village actually is the main meat of the module. Really cool bait-and-switch. And yes, I am aware that this does not sound particularly cool or special, but it’s the details here: The place feels more alive than most places I’ve read about and has a distinct, nice, gritty old-school Greyhawk-ish, dark vibe I love.

Editing and formatting have vastly improved in this issue – the proofreaders did a good job on a formal level. On a rules-level, a few inconsistencies have crept into the book. Layout adheres to a no-frills 1-column b/w-standard and the pdf’s artworks are impressive, particularly for the low and fair price point. The pdf comes fully bookmarked for your convenience. The adventure gets nice b/w-maps, but, alas, no player-friendly, key-less versions.

Tim Shorts, Jason Sholtis, Ken Harrison, Rob Conley and Boric G deliver a fine Manor-installment here – this basically represents the step towards professionalism for the ‘zine. You see, while this still has its old DIY-charm, it feels much more refined and is better in its presentation and the quality of the content. The adventure is amazing (worth getting the pdf for!) and the monsters are generally interesting, though the inconsistent quality of their rules does drag this down a bit. My final verdict will hence clock in at 4.5 stars, rounded down for the purpose of this platform.